A space-race documentary and a Mideast-set military procedural meditate on the shifting character of American heroism.

The Bush years have given American swagger a bad name, but there was a time when this quality was rooted not in cowboy-style bluster but in competence and confidence. You can see this in In the Shadow of the Moon, a terrific new documentary about NASA's Apollo space program, which put men on the moon in 1969 and returned for several subsequent voyages over the next few years.

Directed by British filmmaker David Sington and produced, in part, by Hollywood director Ron Howard, who celebrated the most difficult, tense Apollo voyage with his film Apollo 13, In the Shadow of the Moon might be as captivating a stew of imagery and words as has been seen on the big screen this year.

Sington posits this history of the Apollo program as something almost mystical, pointing out that the Apollo astronauts are "the only human beings to have visited another world."

"I want to promise you I'm human," says Apollo 17 commander Gene Cernan early on. "I pinched myself to find out whether it was really happening. I called the moon my home for three days of my life, and I'm here to tell you about it. That's the stuff of science fiction."

All of the men interviewed — 10 of the 15 surviving Apollo astronauts who traveled to the moon — seem humbled by their experience. Charlie Duke, an Apollo 16 pilot who describes his father being in awe of his accomplishment and his 5-year-old son not the least bit impressed, recounts looking out the window of his ship at the shrinking planet he'd left and thinking how fragile Earth seemed, "hanging in the darkness like a jewel."

Mike Collins, now in his 70s and still gifted with the guileless twinkle of the young boy who grew up flying model planes, was the Command Module pilot of Apollo 11, the first flight to actually land on the moon, and he was the man who stayed aboard the main ship, orbiting the moon, while the rest of his crew — Neil Armstrong and Buzz Aldrin — were making history on the surface. Collins is the most engaging of the subjects here, but it's stiff competition.

Sington makes an astute decision to make his film basically an oral history. All narration and commentary, save a few written intertitles, come from the astronauts themselves, in tightly framed close-ups that often linger on the faces of these men for moments after they're done speaking. These 10 men (Aldrin among them; the somewhat reclusive Armstrong did not participate) make for riveting, engaging subjects. Here is a bunch of old American white men, many of them with Southern accents, macho yet intelligent and gentle. They have accomplished great things via, in part, what Apollo 14 pilot Edgar Mitchell describes as an espirit de corps, a willingness to risk danger, and a pioneering spirit rooted in their generally shared history as test pilots. They are old-school American men, and they give that generally discredited class a fairly thorough redemption through In the Shadow of the Moon's two hours.

Sington pairs this terrific interview material with NASA archival footage, newly remastered and much of it unseen, synched up with original sound for the first time. This gripping footage is awesome in the most literal sense. Kubrick couldn't touch it.

In revisiting the shiniest, happiest byproduct of the Cold War (the film acknowledges Soviet competition as a primary impetus to exploration), In the Shadow of the Moon restores the luster of the space program at a time when it seemingly lies dormant and barely dents the public consciousness. But, more than that, it speaks to a part of the American character itself.

"It was a bold move, and it had some risks," says Jim Lovell of the Apollo 8 mission, which rushed to beat the Russians into moon orbit. "But it was a time when we made bold moves."

We still make bold moves, of course. But the conception, follow-through, and outcome are not the stuff of the Apollo program. In the Shadow of the Moon acknowledges the dark side of this era in American history — a bad war in Vietnam, assassinations and unrest at home — but it also recaptures a moment when the world was united in admiration of American achievement. "I think it's wonderful," one European woman says in response to the moon landing. "I always trust an American. I knew they couldn't fail." Even the French loved us.

The image of American heroism captured here is built on role-playing, as always. But the laid-back machismo and professional swagger of these men is the stuff of Humphrey Bogart and John F. Kennedy, the president who set the mission in motion, not the more arrogant, less competent version that's evolved in recent decades. It's a movie that taps into feelings of patriotism and pride made latent by recent events. As such, it's a moving, inspiring experience. But a bittersweet one. 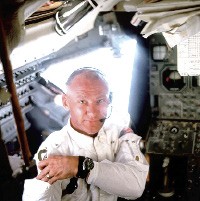 The Kingdom, the latest film from actor-turned-director Peter Berg, also opens this week and is also somewhat of a testament to the American can-do spirit. The fictional story is about a terrorist attack at an American compound in Riyadh, Saudi Arabia, and the four-person team of FBI agents who are sent to investigate.

The cast here — Jamie Foxx plays the primary investigator, leading a team played by Chris Cooper, Jennifer Garner, and Jason Bateman — is likable and relatively believable (in characterization, if not action). They create an engaging sense of competence and confidence, their quippy asides and gallows humor underscoring the ease of their professional camaraderie as they begin to piece together the clues in Riyadh. This feels like the inspiration of producer Michael Mann, who, himself, seems to get his feel for this dynamic from classic-age Hollywood films, primarily those of Howard Hawks. These outlaw-hero qualities — once pleasing embodiments of the American spirit — were corrupted in the age of Die Hard and Ronald Reagan and haven't seemed like noble qualities for a while. But, in its quieter moments, The Kingdom hearkens back to an earlier notion of the American character embodied in In the Shadow of the Moon.

Unfortunately, The Kingdom doesn't have the modesty or control to hold this tone. It wants to be a serious treatise on global politics, à la Syriana, and it also wants to be a noisy, exciting action movie. Berg isn't content to make a mere quality film in the Hawks or Mann mold. He wants to win an Oscar and make a blockbuster. Can someone make a serious movie about the impact of violence and still craft combat/action scenes in a way that apes the would-be excitement of '80s-era Arnold Schwarzenegger vehicles? Maybe, but apparently Peter Berg can't. And, in trying to make both kinds of movies, he accomplishes neither.

As Gladiator's Oscar win proved, a morally reckless disconnect between what a movie wants to be and what it actually is doesn't have to be a hurdle to significance in this film culture. Gladiator was a movie that encouraged viewers to condemn the film's bloodthirsty coliseum masses. Yet the film's brutal fight scenes were presented in a way that encouraged filmgoers to become the modern equivalent of those ancient spectators.

The Kingdom has the same should-be fatal flaw. The film ends with speechifying against violence in favor of cultural understanding. But the film's opening terrorist attack is presented in a way that encourages a demand for vengeance, something the film is all too happy to deliver with a noisy, unlikely shoot-out climax. The film audience, for example, is encouraged to cheer the sight of a knife plunged into a man's groin. At a recent local preview screening, the audience eagerly and loudly complied.

In the Shadow of the Moon