From the beginning, America has been a utopian project. The Founders had come of age in an era that highlighted the problems of monarchy and what we now call authoritarianism. They saw decades in England dominated by civil war, with only the cast of unyielding megalomaniacs changing from time to time. They threw off a haughty monarchy interested only in exploitation and indifferent to the needs of its subjects in far-flung colonies. They embraced the ideals of science and the Enlightenment to create a system of democratic self-rule in the hopes that these United States could be a better place than those that came before. In 1790, George Washington wrote to a supporter that, "The establishment of our new Government seemed to be the last great experiment for promoting human happiness."

From the beginning, America did not live up to the ideals espoused by our founding documents. All men were created equal — except the Black slaves. People were endowed by their creators with the inalienable right to life — except the natives who had to be slaughtered so we could take their land. Everyone had a right to vote — except for women, who made up half the population. But the ideas unleashed by the American Revolution proved infectious and hard to kill, sparking a pandemic of democratic thought all over the world. Like science, there is no end state to democracy; it's a process. America is a 244-year-old work in progress. 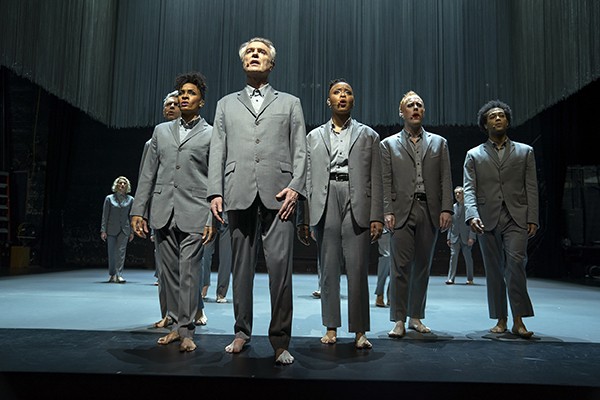 Embracing the will to change is a theme that runs throughout American Utopia. It might sound strange to claim that a concert film has a theme besides "get up and dance," but this is no ordinary concert film. David Byrne, who gained fame as the frontman for the greatest of the 1970s art punk bands, Talking Heads, crafted a Broadway show out of the unique tour he designed for his 2018 album. When Byrne played at 2018's Memphis in May, the contrast between his act and the dozens of other pop, rock, and hip-hop acts was striking. Instead of a stage full of musicians tethered to the instruments, Byrne and company started out with a blank stage surrounded on three sides by curtains of silver links. The musicians, carrying their instruments in harnesses like a marching band, moved freely about the stage, executing choreography that took from both the freedom of the New York modern dance scene and the rigid precision of color guards and drum corps. Once the show moved to the Great White Way, it was refined into a blockbuster, which was selling out the historic Hudson Theatre.

Talking Heads were the subject of what is, for my money, the greatest concert film ever made, 1983's Stop Making Sense, directed by the late Jonathan Demme. To document American Utopia, Byrne reached out to fellow New Yorker Spike Lee. Filming a Broadway show might seem like a waste of talent for someone on the shortlist of America's greatest living directors, but Stop Making Sense proved the concert film is a unique and subtle challenge for a filmmaker.

Fortunately for us, Lee said yes, and he was more than equal to the task. This is not a three-camera shoot feeding a Bonnaroo live-stream. Lee and cinematographer Ellen Kuras have an uncanny knack for putting their cameras in exactly the right place to capture the drama and spectacle of the choreography. We get views from the wings, close-ups of the dancers' bare feet, and even a rotating overhead camera.

The film's 20 songs span Byrne's career, from the twitchy "Don't Worry About the Government" from the Talking Heads' debut in '77, to "Everybody's Coming to My House" from 2018. The nestled polyrhythms and Dada poetry of "I, Zimbra" sound made for the percussion-heavy band, led by frequent Byrne collaborator Mauro Refosco. Songs from American Utopia, which sounded a little half-baked on the record, come into their own before the packed theater.

Byrne begins the show holding a model of a human brain. As New Wave's poster boy, he weaponized what he now describes as mild autism into a persona that fit the confrontational CBGB punk scene where the Heads first emerged. The arc of American Utopia echoes his experiences growing up in public as a perpetual outsider trying to relate to the neurotypical. In his opening description of the brain, he pays special attention to the corpus callosum, the groove that both separates the two hemispheres and carries messages back and forth.

Byrne wants to show that we are much more alike than we are different. He points out that most members of his band, including himself, are immigrants. The American experiment has produced horrors and violence, but our openness has also led to the greatest flowering of creativity the world has ever seen. In this time of darkness, Byrne and Lee say we can once again come together to pursue that elusive dream of utopia. With this singularly joyous film, they are leading by example.

American Utopia is airing on HBO, and streams on HBO Max.