Coach Cal returned this week, but the stars of the show were named Pastner and Barkley.

John Calipari returned to Memphis, sort of, on Monday night.

The most popular person in Lexington, Kentucky, cohosted a previously scheduled event at Harrah's casino in Tunica billed as "An Evening with Coach Cal and Friends."

Which, for the most part, it was. He showed the flag at an event where there was unlikely to be any boos, jeers, or hostile questions. There was a crowd of about 300 people, most of whom seemed bent on getting an autograph or a picture with the former Tiger basketball coach.

"Most of us, deep inside, are happy for John Calipari," said master of ceremonies Dave Woloshin.

Calipari got a standing ovation, which some saw as being as perfunctory as the church congregation that stands at a wedding while thinking dark thoughts about the bride and groom.

Was it sincere? Who knows? Are the anonymous slam jobs on the radio and Internet comment boards sincere? The tickets cost $150 face value. A few hundred people showed up. They were standing. You can do a lot worse.

Striding back and forth across a stage in front of a huge video screen, Calipari assured the crowd yet again that what made his decision difficult "wasn't about Kentucky, it was about here." He will honor his charity commitments, but "I won't get involved like I was a week ago." Ever the rainmaker, he presented a children's charity with a check for $15,000.

He quickly yielded the spotlight to his successor, Josh Pastner.

"I would take a bullet for that guy," Pastner said.

Pastner is 31 years old, three years older than Calipari was when he got his first head coaching job. But he looks younger than that, an impression reinforced by his habit of calling his elders "mister" as in Mr. (R.C.) Johnson and Mr. (Charles) Barkley, the ex-NBA star, current broadcaster, and event headliner.

Literally following in Calipari's footsteps, Pastner worked the crowd a bit and said he hopes to hang on to most of the Tiger players who still have some eligibility, especially center Shawn Taggart, who might turn pro. But nobody asked him the question I was hoping they would: Has he really never drunk a carbonated beverage or an alcoholic drink? Someone at my table, noting Pastner's high-charged enthusiasm, suggested he might favor Red Bull. 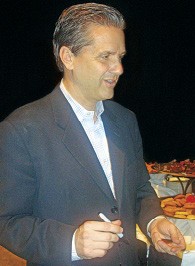 Then it was Barkley's turn. Woloshin learned shortly before the festivities began that he would be going one-on-one with Barkley for an hour or so instead of merely introducing him.

To loosen things up, Barkley started off by saying, "I met your wife. I'm glad. I thought you were gay."

In sports circles, Barkley is regarded as a sage, lovable bad boy and a truth-teller in a world of phonies and canned answers. He stands only 6-4, but played at 290 pounds in college and 250 in the NBA. He appears to be back around his college playing weight and then some.

His deadpan delivery is as sweet as his jump shot used to be.

On Lance Armstrong: "The brother rides a bike. To say he's the greatest jock in the world is ridiculous."

On getting cut in high school basketball: "I used to be short and fat. Michael Jordan just sucked."

On Rihanna and Chris Brown: "You can't hit a woman."

On the greatest white man ever: "Colonel Sanders."

On domestic bliss: "You should never buy your wife a watch. There's a clock in the kitchen."

On Calipari: "I think he had to take the Kentucky job. There are certain jobs in sports you have to take."

On running for governor of Alabama, his home state: "We're number 48. If it weren't for Arkansas and Mississippi, we'd be lower."

Woloshin reminded him, "We're in Mississippi." Barkley blew right by him.