Have you ever stood in front of a crazy-looking vegetable and thought: What the heck is that? Well, good news. Chefs do it too. That's what happened the other day, when Ana Gonzalez and I stopped by Memphis Farmers Market.

"They're called muscadines," a helpful vendor explained. "They're like red grapes, but the skin's a little tougher, and they've got one to four hard seeds inside."

As a proud Colombian, Gonzalez can be forgiven for not knowing about muscadines, which are native to the American South. At five foot six she's a fireball, and she has the endearing habit of calling her friends "baby." She also happens to be the executive chef at Bleu in the Westin, where she specializes in small, shareable plates packed with bold, fresh flavors.

Oh, and she's not afraid of muscadines. After learning about them, she snags two pints.

Gonzalez has agreed to take the Flyer's Farmers Market Challenge. That's where we take a chef to the farmers market and make lunch. Fortunately, she's got help: today she's brought along her two sons, Brian (age 11) and Deven (age 5).

It's a hot day, so we fortify ourselves with some home-made popsicles from Mama D's. Gonzalez chooses mango, but her kids prefer cookies and cream. Then it's time to hit the stalls.

Over the course of an hour, our market basket gradually fills with heirloom tomatoes from Plowboys Produce, herbed goat cheese from Bonnie Blue Farm, duck prosciutto from Porcellino's, arugula from Whitton Farms, and shiitake mushrooms from Dickey Farms. We're just about to head for the car when, all of a sudden, the brassy boom of an operatic baritone cuts the air.

If Santa Claus had arrived with a sleigh of presents, I don't think the crowd would have been more surprised. Upon closer inspection, the songful stranger reveals himself to be from Opera Memphis, the performance a part of Opera Memphis' 30 Days of Opera. Gonzalez and her kids have never been to the opera before, but now they say they're considering it.

"I like the way it sounds," Deven sings, with an operatic vibrato.

At home in Southaven, we are greeted with a glass of white wine by Gonzalez' husband, Brian Barrow. The two met at culinary school — Johnson & Wales University in Miami — but their cooking styles couldn't be more different. Barrow is a classicist, favoring continental dishes with elaborate preparations. By contrast, Gonzalez is more modern, whipping up light, fresh flavors from around the globe.

How does a classicist from Los Angeles end up with a modernist from Colombia? Gonzalez says it all started one day in Advanced Pastry class.

She remembers, "It was right after Thanksgiving, and everybody was working over break. And Brian got the professor to move [our quiz] back by a day. I leaned over to my friend and said, 'I'm gonna marry that man.'"

For lunch, we're having ... everything. Today's menu includes grilled pork chops and salmon and steak. And peach sangria, and roasted veggies, and a watermelon salad. I assume that Gonzalez and her husband are showing off for the newspaper reporter, but Barrow sets me straight.

"Oh no," he admonishes, "we do this every Saturday. This is just lunch."

Lunch, indeed. While I sip wine and snap photos, the family gets to work. After 15 years of marriage, Gonzalez and Barrow function like a well-oiled machine, wordlessly, seeming to read one another's thoughts. While she whisks the sauce, he's outside on the grill. Even little Deven gets in on the action, trimming green beans and peeling a turnip.

"My kids are like me," Gonzalez confesses. "They're always working." 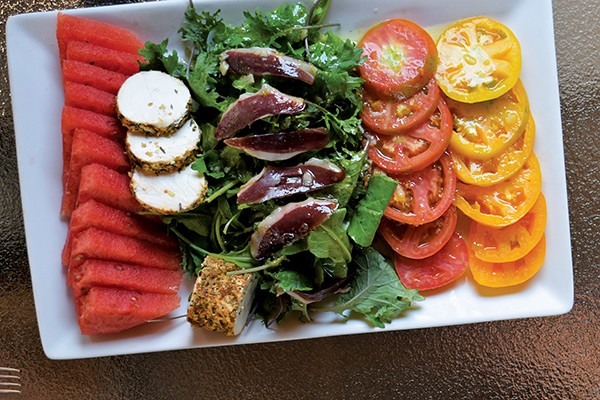 At last it's time to eat. The meats are succulent and well-spiced, but by far the best thing on the table is the watermelon salad: an artful arrangement that includes arugula and baby kale, heirloom tomatoes, herbed goat cheese, and duck prosciutto.

True, you can buy most of these ingredients at the grocery store. But getting them fresh from the farmers market makes a difference. The flavors are electric; they are followed by little exclamation marks. Drizzle this salad with a lemon zest vinaigrette, and you'll never look at watermelon the same way again.