I'm a fan of awkward sex scenes. I'm not talking about the blue-backlit, Tom Cruise/Kelly McGillis sex scene set to "Take My Breath Away" in Top Gun, or the Tom Cruise/Nicole Kidman mirror sex scene in Eyes Wide Shut. Sure, I like watching Tom Cruise have sex as much as the next guy, but I prefer fumbling, awkward, embarrassing sex scenes. One of my favorites is in the otherwise unremarkable 1986 film The Big Easy, where Dennis Quaid struggles with his clothes, and Ellen Barkin exclaims, "I'm not very good at this!" Not only do those kinds of scenes feel more realistic (Have you ever had Berlin and a blue backlight on a first date?), but they also reveal more character than boobs. Would you believe that the best sex scene of the Oscar season is in a film nominated for Best Animated Feature? 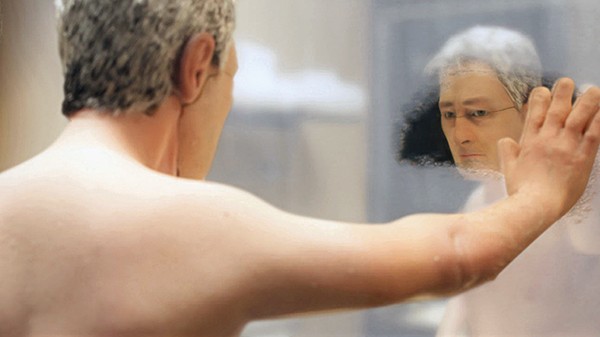 Based on an experimental play Kaufman wrote in 2005, Anomalisa's closest filmic companion is probably Sofia Coppola's Lost in Translation. Michael Stone (voiced by David Thewlis) is an author and customer service management consultant who is traveling from Los Angeles to Cincinnati to deliver a lecture. After an awkward exchange with his seat mate on the plane (voiced by Tom Noonan) and an excruciatingly long cab ride with a talkative cabby (also voiced by Tom Noonan), he settles into his fancy hotel room with a call to his wife (Tom Noonan) and son Henry (Tom Noonan).

You may be sensing a pattern in casting by now.

The only other character in the film not voiced by Tom Noonan is Lisa (Jennifer Jason Leigh), a woman from Akron who has traveled to Cincinnati to see Michael speak. By the time the two meet, Michael is in the midst of a full-blown existential crisis of the sort that, in films, always seem to occur in a luxury hotel. The two share a brief encounter (this is where the awkward sex happens) before Michael must give his speech the next day and decide whether or not to return to his wife.

Anomalisa's often funny script full of quiet yearning would have been quite easy to film in a conventional manner — indeed, there are countless indie films in the last decade that use the premise of the chance encounter that fills unmet needs in lonely lovers' lives precisely because it's an easy scenario to film. But by taking the story and lovingly creating everything in miniature — from the cotton-ball clouds the tiny model airplane flies through to the dingy Cincinnati cab to the anonymous luxury hotel suite — Kaufman and Johnson have conjured a great technical achievement. By the time the close-up of a martini glass stem in the hotel lobby bar happens, you might have forgotten you're watching an animated film. But don't worry, Kaufman will remind you with a dream sequence where he deconstructs everything, right down to the stop-motion puppets themselves.

Anomalisa is a worthy addition to Kaufman's formidable filmography, which includes not only his collaborations with Spike Jonez, such as Being John Malkovich, but also Synecdoche, New York, which no less a critical mind than Roger Ebert called the best film of the 2000s. This is Kaufman's first film in seven years, which is a big shame. When you hear the lament that superhero-sized blockbusters are pushing out more worthy mid- and small-budget movies, consider that little bits of genius such as Anomalisa is the sort of creative, serious work we're missing out on. It's not just the artists who are suffering.