Ant-Man and The Wasp

Get Small With Marvel’s Littlest Superheroes

This Friday, July 13th, The Orpheum Summer Movie series will screen Honey, I Shrunk the Kids. The 1989 film was the directorial debut of Joe Johnston, who got his start in film as a concept artist for Star Wars, and later won an Academy Award for art directing Raiders of the Lost Ark. Memorably led by Rick Moranis as a complacent suburban dad turned wacky inventor, Honey, I Shrunk the Kids gave Johnston an excuse to go nuts with visual gags derived from The Incredible Shrinking Man. Forced perspective, giant spools of thread, and angry ants are a winning combination.

A lot of the Marvel films are other genres in comic book drag. Captain America: Civil War is a paranoid '70s spy thriller. Guardians of the Galaxy is more space opera than superhero flick, which is why it plays particularly badly with the others in Infinity War. Ant-Man and the Wasp is basically Honey, I Shrunk the Supers, and its unpretentiousness is pretty refreshing.

Joe Johnston would have been a good fit to direct Ant-Man and the Wasp, but he's only done one Marvel movie: Captain America: The First Avenger, which, if pressed, I would probably call my favorite of the whole bunch. Instead, we get Peyton Reed, a comedy director who took over the first Ant-Man after Edgar Wright was fired mid-production. He opens Ant-Man and the Wasp with a sequence in which Scott Lang (Paul Rudd) leads his little daughter Cassie (Abby Ryder Fortson) through a cardboard maze they built in his apartment, echoing the events of the first film. It's a winning little bit of self-reference, but, unfortunately, the only time in the film when Paul Rudd shows a pulse. Rudd was workable in the first film and in his subsequent cameos, but here he's lackadaisical. 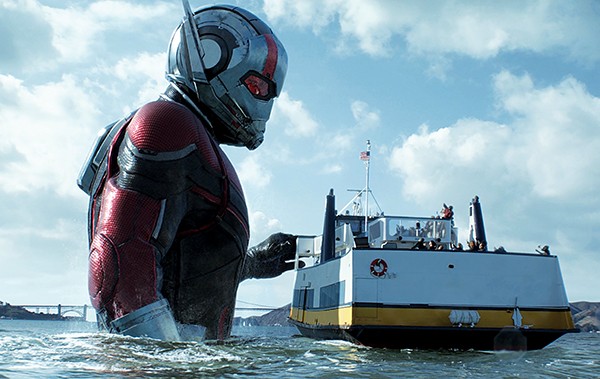 Fortunately, Ant-Man is not the only hero on order. Hope Van Dyne (Evangeline Lilly) has inherited her mother's super identity, The Wasp. She and her father, super-scientist Hank Pym (Michael Douglas) are trying to rescue Janet Van Dyne (Michelle Pfeiffer) from the Quantum Realm, where she has been trapped for three decades after she and Hank got waaay too small. To do that, they have to deal with shady arms dealer Sonny Burch (Walton Goggins), a sniveling villain right out of a lost episode of The A-Team. His betrayal gives The Wasp her first big solo action sequence, positioning her as the real heart of the film.

Instead of building to a Marvel Third Act, where our heroes must fight an onslaught of faceless minions of the big bad, Ant-Man and the Wasp keeps the stakes relatively low, opting for an A plot and B plot which begin independently and then get quantumly entangled. One of Rudd's few laughs in the film is when, in a tense meeting with Hank Pym and his physicist frenemy Bill Foster (Laurence Fishburne), he belts out "Do you guys just say quantum in front of everything?" Once semi-disembodied villain Ghost (Hannah John-Kamen) gets involved, everything from a World's Greatest Grandma trophy to Pym's Incredible Shrinking Laboratory get their turn at being the MacGuffin for a few minutes.

The meat of the picture is the special effects riffs made possible by protagonists for whom scale has become arbitrary. This is a $160 million movie that is not afraid to just drive a little remote controlled car down the street and film it. A flatbed truck gets used as a skateboard, there's a completely appropriate Hot Wheels tie-in, and it wouldn't be a movie about shrinking without a giant salt shaker. As the film goes on, the goofy practical effects give way to the Steve Ditko-inspired, psychedelic vistas of the Quantum Realm.

Reed's playful sense and light touch manages to avoid superhero fatigue for the most part. The biggest crossover element to connect the story to the larger universe ends up providing gags, as Scott Lang is under house arrest after botching his part of Captain America: Civil War, and he must gaslight his FBI handler Jimmy Woo (Randall Park). Even though he's top billed, Ant-Man gets overshadowed, but the rest of the cast makes up for him, especially given the pleasantly surprising amount of screen time Michael Douglas receives. With Rudd a void at the center, a game Lilly leads the rest of the cast in saving the picture, and the day. Marvel's as big as ever. It's the Ant-Man who got small.

Ant-Man and the Wasp