On September 2, 2001, the Cartoon Network launched a new block of shows called Adult Swim. It wasn't the first time the network produced shows not aimed explicitly at children — the surrealist talk show deconstruction Space Ghost Coast To Coast had been baffling audiences since 1994. But enabling producer Mike Lazzo's obsession with creating cutting-edge television would turn out to be a fateful decision for the network. Adult Swim became wildly popular, and many of the boundary-breaking shows that came out of Williams Street studios proved as influential on the comedy sensibilities of the Internet generation as David Letterman had been on Generation X.

The longest-lasting of the Adult Swim Class of '01 is Aqua Teen Hunger Force. Created by Space Ghost Coast To Coast writers Dave Willis and Matt Maiellaro, it stars an unlikely combo of talking fast-food items: a box of french fries named Frylock, voiced by Carey Means; an egotistical, disposable plastic cup named Master Shake, voiced by Dana Snyder; and the self-explanatory Meatwad, voiced by Willis. From their house in darkest New Jersey, they fend off alien invasions, fight monsters, and sneak into porn- and football-obsessed neighbor Carl's filthy above-ground pool. Or at least they did in the first few episodes. As time went on, the plots became looser, and the humor more surreal and idiosyncratic. Willis and Maiellaro delight in coming up with weird new characters to bounce off the lead trio, such as the The Cybernetic Ghost Of Christmas Past from the Future, a robot turkey who tells shaggy dog stories; MC Pee Pants, a giant insect in diapers played by nerdcore rapper MC Chris; and a classical Greek Siren voiced by indie songstress Neko Case. Tied together with a catchy hip-hop theme song by Schoolly D, the show struck a chord, and, as other shows fell by the wayside, it served as Adult Swim's unlikely flagship. Aqua Teen's biggest splash came in 2007 when an LED sign depicting a Mooninite, the series' most popular recurring characters, briefly closed down the city of Boston when it was mistaken for a bomb. The hubbub overshadowed the Aqua Teen feature film the sign was supposed to be promoting, but that was just as well. One of the show's great strengths is its 11-minute length, which helps free the scripts from any sort of traditional TV expectations. Stretched out to 70 minutes, its non-sequitur plotting collapsed under the weight of its own ridiculousness. 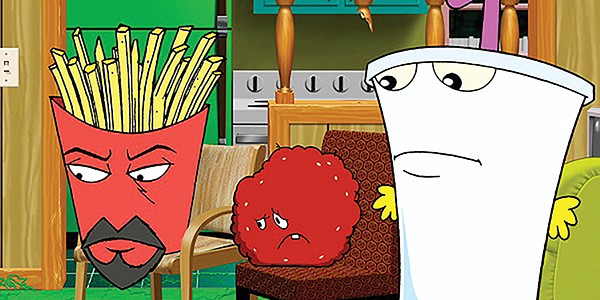 The current 14th season of Aqua Teen Hunger Force will be its last, but the insanity the show championed has been assimilated by the legion of YouTubers and anti-humorists that define the current comedy zeitgeist. The show's impending demise was mourned with a candlelight vigil at this year's San Diego Comic-Con.

After a string of wildly inventive creations in the 2000s, Adult Swim has struggled to find material to live up to the Aqua Teen legacy. The best show currently in production is Rick and Morty, created by Justin Roiland and Community mastermind Dan Harmon, which had its second season premiere last Sunday. Imagine if Doc Brown in Back to the Future was completely insane and took Marty McFly on mind-bending comedy adventures in the multiverse, and you've got a good idea of what Rick and Morty is like. At one point in "A Rickle in Time," the first episode of the new season, the on-screen action was split up into 64 panels, each showing a slightly different version of the same events. The show is visually inventive, wildly funny, and occasionally hints at deeper characterization in the classic Simpsons mold.

But as great as Rick and Morty is, it still adheres to the 25-minute sitcom structure. Recent Adult Swim attempts to recapture the magic of Aqua Teen's 11 minutes of anarchy, such as Mr. Pickles and the Mike Tyson Mysteries, have fallen short. Last year's breakout viral hit Too Many Cooks points a way forward for Mike Lazzo's ongoing experiment, but it was an elaborate live-action skit. When the last quirky, limited-animation Aqua Teen Hunger Force episode airs later this summer, it will mark the end of a very strange era.