‘Art & Soul’: The Two Burtons Delve Into Faith and Life

Art & Soul lives brilliantly on so many levels. It is a book of works by the acclaimed Memphis artist Burton Callicott. It is a collection of his calligraphy as well, elegant in execution and thoughtful in the poetry expressed. It is further joined with writings of Burton Carley, former minister of the First Unitarian Church of Memphis, Church of the River.

The pairing is perfectly natural, as Callicott was a member of the church (since the early 1930s) and the two Burtons found an instant connection when Carley came to the church in 1983. Both shared an abiding spirituality and deep curiosity about religion, philosophy, humanity, and life. 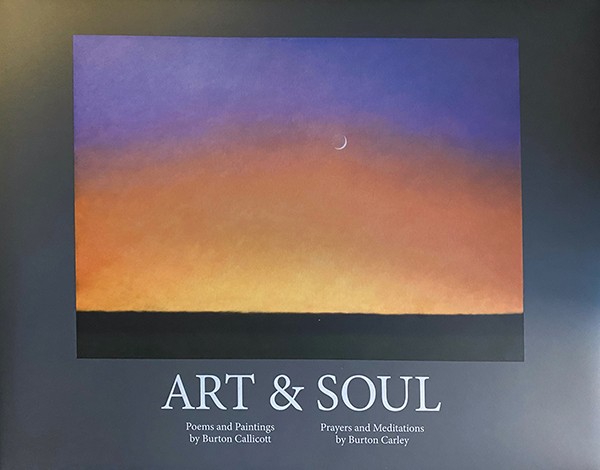 The two talked some two decades ago of collaborating on a literary work, but Callicott's death in 2003 seemed to put that dream to rest.

It eventually came to Callicott's son, Baird Callicott, to pull the project together. In 2015, Baird retired from teaching and Carley retired from his position at the Church of the River. They met and the project was rekindled, but with a more ambitious goal. The volume, it was decided, would have numerous examples of the elder Callicott's artworks that would be joined with his poetry as well as with Carley's meditations.

The result is a gorgeous collection of extraordinary artworks, beautifully lettered poems, and thoughtful contemplations from both Burtons. Both were an essential part of the history of Memphis, and important context is provided in the foreword by Baird and his sister Alice, as well as in the introduction by Carley.

It's a tribute to the quality of the book that photographer Murray Riss signed on as image editor for the volume, and Jeff McMillen designed it.

Callicott's biographical information is treasure enough with his long life in and impact on Memphis. After art school, he worked for his impresario stepfather, who was in good favor with Boss E.H. Crump. Young Callicott worked on floats and displays for the Cotton Carnival parades and whatever else his stepdad needed. He would meet and marry Evelyne Baird during the Great Depression, but both made enough to sustain a life.

Callicott was able to work for the Works Progress Administration Federal Art Project in 1933 to paint murals in the foyer of the Pink Palace Museum. Then in 1937, he was among the founding faculty of the Memphis Academy of Arts where he taught until his retirement in 1973. (One fascinating fact is that during World War II he worked as a draftsman doing highly detailed "exploded drawings," such as one pictured in the book of an illustration for a B-29 pressurized gunner's cabin sub-assembly.)

When he retired, he was well enough regarded that he could live on the sales of his artworks, and to this day it's a mark of distinction to have a Callicott in one's collection. If an original is not in your price range, you can still get a rainbow license plate designed by Callicott to benefit the Tennessee Arts Commission.

It was only late in his life that he started his earnest writing of poetry and rendering many of them in calligraphy. They run a wide variety of emotions and observations, but one that evokes his artistic sensibility is expressed in "No. 10":

How still and peaceful

of my unquiet mind.

Art & Soul is for sale at Burke's Books and Novel.