Avenue Coffee Serving Coffee for a Cause

Non-profit coffeehouse aims to be spot where people can have open conversations and form lasting relationships while fighting for social justice locally and globally.

Justin Fox Burks A patron enjoying a cup of coffee

It all started with a college assignment in 2010. Freshmen at Mid-South Christian College were placed in groups and told to come up with an idea for an outreach in Memphis. Group number 10 envisioned a coffee shop where people could have open conversations and form lasting relationships while fighting for social justice locally and globally.

Thanks to help from friends and several local churches, the team's philanthropy has found its roots at the corner of Echles Street and Douglass Avenue, a half-mile south of the University of Memphis. 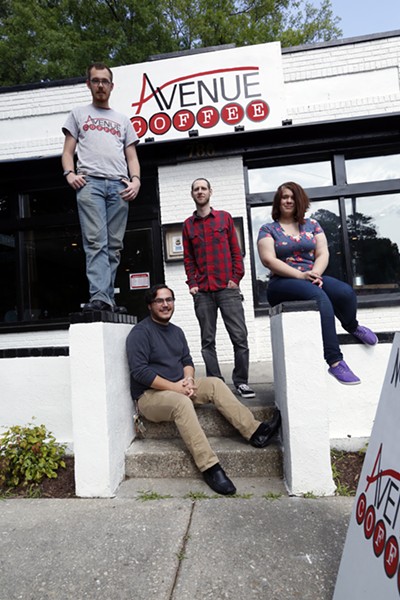 The coffee shop is a non-profit, and the team plans to focus on one social justice theme each month, donating money to a related charitable organization and raising awareness of the month's cause with art and live music by local artists.

But they also hope to make a more personal impact in the community by encouraging college students and others to invest in each others' lives through good, old-fashioned face time.

"We want to reach out to Memphis; we want to help create a better community; and we want to get involved in people's lives and give them quality conversation," Skaggs says. "We're all Christians, and this isn't some covert operation to get into people's lives and make them convert. But we really just want to introduce them to Christ's love, and we want to do that by forming lasting relationships and giving them a quality service."

Debbie's Heavenly Morsels, an assortment of treats from local baker Debbie Stephens, are also baked and sold at Avenue Coffee, giving customers the chance to savor cookies, muffins, or cupcakes ($2 each) with their freshly brewed cup o' Joe.

Each morning, Stephens bakes at least three different types of muffins, three kinds of cupcakes, and four varieties of cookies to be sold at Avenue. She uses organic ingredients when available.

"We've been kind of experimenting every day, but there are some we'll have every day," Stephens says. "We have the heavenly morsels and peanut-butter Oreo cookies. Every now and then I'll feature the pecan pie cookie. A new one I introduced yesterday was an apple-walnut-raisin muffin that was my great aunt's recipe."

Baking is in Stephens' blood. "My great grandfather was a baker in Brooklyn," Stephens says. "He came over from Russia, and my grandmother and all of her siblings used to work in that bakery, so I've gotten some recipes from her over the years. I've been baking since I was probably 8 years old."

After retiring from FedEx last May, Stephens connected with the Avenue team through her church, East Win Christian Church.

"I had decided that I either wanted to open up a bakery or work in a bakery, and because this was mission-minded, it was the perfect fit for me," Stephens says.

Stephens sells her goodies by the dozen, and she also accepts special orders for mini muffins, pies, cookie cakes, and decorated cakes.

Avenue has a typical coffee-shop vibe with tables, Wi-Fi, and plenty of outlets for people trying to be productive. But the split-level building also has couches in an alcove on the upper level for customers who want to hang out and chat.

When the team was discussing what to name the shop, team member Elizabeth Bliffen suggested the name Avenue Coffee.

"It works because we're on an avenue [Douglass], and we want this to be an avenue into people's lives and an avenue to find the truth of Jesus Christ," Skaggs says.

They are looking for people willing to volunteer a few hours working at the shop. If interested, call the store or send an email to avenuecoffee@gmail.com.

Avenue Coffee is open Monday through Saturday from 7 a.m. to midnight.