The chefs and restauratuers speak on James Beard Awards, rebuilding, and new horizons.

Andy Ticer and Michael Hudman have been busy opening a new restaurant, reacting to a fire at Hog & Hominy, and being honored by the James Beard Awards. Here's a look at what's happening with the award-winning chef team.

MF: How does your new restaurant, Bishop, complement or contribute to the presence of French cuisine in Memphis?

Hudman: Memphis is always, to us, a place that starts by acknowledging where we come from. French cooking is rooted in that same style of techniques, passed down, done right. It's about mentorship. These are things that we value in our company. We're always looking for ways to build our people, and this was a natural entry point. When the idea came to us, it just made sense to flex those old muscles as a callback to where we started. The moment that we saw the space that Natalie Lieberman had designed and the collateral and branding from Loaded for Bear, it clicked. We'd wanted to do a French brasserie for a while, and here it all was, ready to go.

Ticer: It's funny. My brother Olivier is from France, and he just happened to be in town the week we soft opened. He told us that, often, brasseries are attached to train stations and breweries, and here we were opening one in a train station. It just made sense. We have our homage to Downtown trattorias at Catherine & Mary's, our riffs on Southern food and oysters from the fire at The Gray Canary, and then our classic French spot attached to a train station. 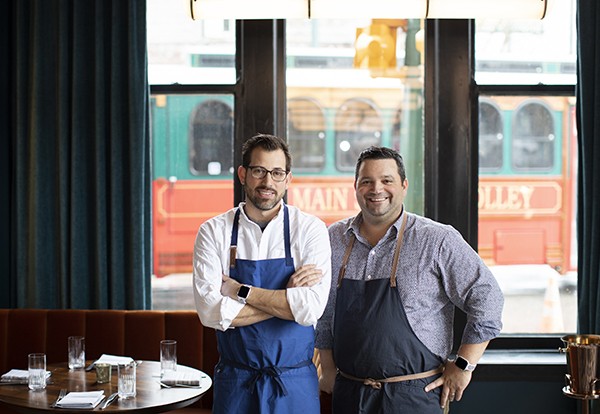 What was it like opening a restaurant in the Central Station Hotel?

Ticer: There are challenges to opening any restaurant, but a restaurant in a hotel is a fun experience. We have to focus on all aspects of the food and beverage, from Eight & Sand and Bishop, to the events in the Grand Hall. The biggest challenge is that we really opened three spaces at once, so there are a lot of moving parts that needed to be focused on all at once.

Hudman: For us, it's all about assembling the right team who can carry that culture of our restaurants. We want everything to feel like it was paid attention to and thought about for our guests, and that takes some time to get right. We opened in the middle of the holiday season, too, which was pretty intense.

How did your experience at Chez Phillippe contribute to the development of the menu and culture at Bishop?

Ticer: Chez Phillippe was such an amazing experience where we really learned to cook and really understood for the first time what it meant to cook with high standards. Chef Jose Gutierrez taught us so much about how to cook, how to pay attention to the details. A lot of the traditional menu items we first tasted cooking there, and after, when we were in Lyon, we were like, "Oh, this is how that started."

What are some menu recommendations you would make for someone visiting Bishop for the first time?

Hudman: That's always so hard because we love everything. But the tinned seafood is really special and really specific to European cuisine. We have a lot of classic items to French cooking that we're not trying to reinvent the wheel on, just make it properly. Salade Lyonnaise, French onion soup, tarte flambée, the raclette. It's about the classic preparation, and we had fun testing until we had it right.

Ticer: I love to start with the grand aioli or the escargot, and the spinalis is beautiful. But there are lots of things. I think go in with an open mind and try things you haven't heard of. And drink some wine! Ryan Radish, our wine director, really had a field day putting together this 150-bottle, all-French list that is really beautiful and fun to drink from.

How does Bishop benefit from being part of the Central Station Hotel?

Ticer: When we first met with McLean Wilson about the hotel and he gave us his vision of it, we were like, yeah, this will be a cool thing to be a part of, a place that celebrates Memphis and really feels local. We really appreciated that McLean wanted us to open our restaurant inside the hotel and not the other way around, a hotel restaurant. It allows us a lot of freedom to do exciting and fun things with the menu. Just like our experience with Ace, there's a lot of infrastructure that the hotel has that gives us the ability to do things we've never done before, including working with these awesome design teams. Because the hotel really wants to function as the living room of South Main, we see a lot of guests from all over, but we're still a part of the fabric of South Main and the Memphis community, rather than separate from it.

Another of your restaurants, Hog & Hominy, suffered an electrical fire earlier this year. How has the restaurant and the staff recovered since then?

Hudman: It's been a real process. Our first priority was to get everyone working, and we met with everyone as a group, and individually, to make sure they were happy going to another restaurant. Our team was loyal to Hog & Hominy, and none of them wanted to leave, but they understood and are now doing their thing throughout the company. They've added a lot, too, to those restaurants, and when they come back for the reopening, they're going to have learned a lot. It's like an extended externship for them.

Ticer: We're going through the insurance process now, which can be pretty frustrating at times. But what we know is that we're bringing the existing structure down and starting over. Fitting Hog & Hominy into a ranch house was always something we were working around, even during the remodel that started last year. So now, we're starting over with a blank slate. It will always need to feel like the old Hog & Hominy, but we have an opportunity to address things like comfortable chairs, noise, kitchen layout, server stations. It's going to take longer than we hoped, but we're not afraid of taking our time to get it right.

The James Beard Awards are an extremely high honor, recognizing chefs and restaurateurs from across the country. How did it feel to be named semifinalists once again — and also to be the only semifinalists from Memphis?

Hudman: It's a huge honor to be on the list. I mean, just looking over the list of the chefs on there from our region and around the country, it's really humbling to see your name on there. Our teams work so hard to produce in the restaurants, so while it is our name, it's a nod to them as well. We can't do it without them.

Ticer: Memphis is growing around the country as a place to come and visit, to see, to move to. We're a city of history, culture, and great food in all kinds of restaurants. It's an honor to represent that on a stage like the James Beard Awards.

What's it like representing Memphis cuisine to those who may not be familiar, or who might think of Memphis food as just barbecue and fried chicken?

Ticer: You know, I think that Memphis might be known for barbecue and fried chicken, but we think of Memphis food as coming from the family table. It's about feeding people because you care. We grew up and got into food because of our grandmothers and our family meals. Sure, you might get yelled at, but there was always good food, and everything came from a place of love. If we can make people feel cared for, then we're showing them what Memphis food is.

What's next for the Andy Ticer and Michael Hudman team?

Hudman: We are mainly focused on getting Hog & Hominy back open, but we do have lots in the pipeline. We're just about finished with the redesign of the interiors at Andrew Michael Italian Kitchen that Natalie Lieberman has headed up. We're trying to make that restaurant feel updated and even more comfortable for our guests. And we have some plans to move into Catherine & Mary's for some adjustments as well. It's been running for four years and needs a little love. Mainly, we're focusing on making sure that the restaurants feel good for the guests and work for the staff.

Learn more about these award-winning chefs at enjoyam.com.