What a difference a year makes. Last October, Bailey Bigger released her debut EP, Between the Pages, on Blue Tom Records (the label run by the University of Memphis), and certainly her skills as a songwriter and vocalist were obvious. Her unaffected alto, reminiscent of Buffy Sainte-Marie, was the perfect vehicle for her simple, deft turns of phrase. But now, as she is poised to release Let's Call It Love, her first EP for Big Legal Mess Records, those songs seem a world away. It's hard to believe she's made such a journey with only 20 years under her belt.

Her trademark qualities are still on full display, but are now complemented with an even more refined band, assembled at Delta-Sonic Sound by producer Bruce Watson.

"Bruce brought a little bit of soul into my music," she says. "He brought in the organ and the electric guitars and things like that that I never would've thought to do on my own. It's Americana but Memphis." She speaks the truth: With players like Mark Edgar Stuart (her mentor of sorts), Joe Restivo, Will Sexton, Al Gamble, George Sluppick, and Jana Meisner, the record represents the state-of-the-art Bluff City sound. 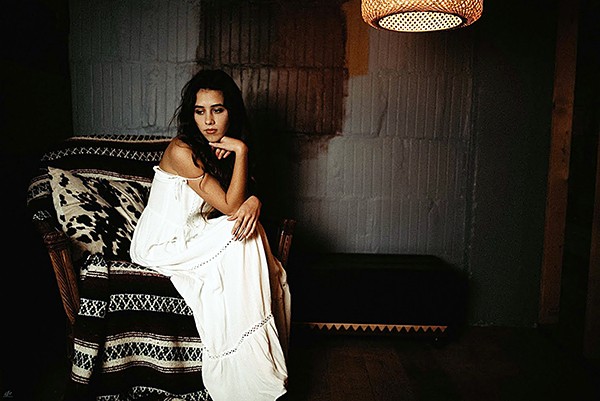 And yet Watson's first pivotal move in making this record was simply rejecting her first batch of songs, forcing Bigger to come up with her best material yet. To compose the new songs, she dug deep into the turmoil she'd recently faced due to an unpleasant breakup, her grandmother's death, and her feelings of alienation in moving from Marion, Arkansas, to the big city across the river. Now that she's happily relocated to a farm near Marion, she's gained some perspective on those earlier struggles.

Memphis Flyer: Was it emotionally difficult to delve into your personal backstory to create the songs on the new EP?

Bailey Bigger: Well, in my poetry-writing class, we were talking about trauma in poetry and how it's really hard to write about traumatic experiences. You have to put yourself in that headspace again and relive it, in a way, to get those truths out on paper or in songs. And a lot of times that's easier to just avoid. But I live for that stuff, in a way, because I think it's one of the most important parts of the human experience, to be open and talk about things that people are afraid to talk about.

That makes for better songs, don't you think? But is it tough to sing those songs once you've written them?

I think it becomes like muscle memory, in a way, performing these things live. If I were to really dig in and relive those moments every time I played it live, I don't think I'd make it through the performances. When I was recording "Let's Call It Love," we cut several vocal tracks and we were like, "Yeah, that's fine. Pitch is good." But I was thinking, "I'm not singing this how I felt it." And that's one of the worst things ever, where your voice isn't delivering what you felt. I hate that. So I said, "Okay, just one more time." And I remember how I channeled the take that I wanted to keep. It wasn't by thinking of the person the song's about. I did not want to picture that person at all. I thought to myself, "Sing to the girl who is in the same place as you are. Sing to that person that it hasn't happened to yet. She still has a chance to get out. Sing to that person that you were a year and a half ago when you didn't see it." So that's what really got me to perform it the way I wanted to.

I also get that feeling from the bonus track, "A Lot Like I Do" — "I remember a girl who looks a lot like you do" — as if you're looking back at yourself.

That was probably the hardest one for me to perform. That one still evokes strong emotions in me every time I play it live. It's probably the most personal song I've ever written in my life. It doesn't even say anything specific about what happened to me, but I think it tells it perfectly at the same time. I can't rely on muscle memory with that. That's a rough one. All three songs are about this transformative time in my life. But the person I was at the beginning of all those traumas is not who I am now.