Even Barbara Blue sounds a little surprised at the talent she gathered together for her latest album, Fish in Dirty H20. While it's true that the blues belter, a regular performer at Silky O'Sullivan's on Beale Street, has worked with some serious contenders in the past (including three albums with Taj Mahal's Phantom Blues Band in the 1990s), she couldn't have predicted that her latest effort would feature one of the greatest drummers in the history of jazz, funk, and soul: Bernard "Pretty" Purdie.

Purdie's work, of course, became legendary soon after he first made his mark drumming for Mickey and Sylvia in the New York scene of the early 1960s. It wasn't long before he was contributing to albums by James Brown, David "Fathead" Newman, Herbie Mann, B.B. King, Dizzy Gillespie, Robert Palmer's Insect Trust, and many others. Pop fans might be most familiar with his solid grooves on hits like "O-o-h Child" or Aretha Franklin's "Rock Steady" and "Day Dreaming," but he also chalked up a number of albums as a bandleader in his own right, now often sampled in hip-hop productions. 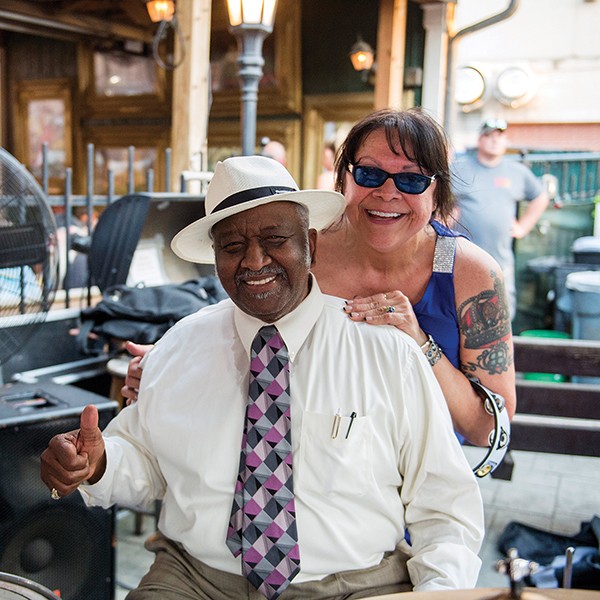 Cut to 2017, when both Purdie and Blue were performing at the Porretta Soul Festival in Italy. "Porretta is known for these little doughnuts they make over there," explains Blue. "They're halfway between a cookie and a doughnut. I'd take 'em to everybody, just to give 'em out. So when I saw Celia, Bernard's wife, I said 'Here, I found these, they're delicious.' She looked at me with tears in her eyes. She's Italian to the bone, from New York. She's got tears in her eyes and says, 'My nonni used to make these.' And we've been like family ever since."

She felt an immediate bond with Bernard as well, she adds, because "we have the same musical philosophy on a lot of things." Recruiting him to cut her latest album was a simple matter. It helped that she had secured time at a studio on Pickwick Lake operated by multi-platinum producer Jim Gaines, best known for his hits with Huey Lewis and Stevie Ray Vaughan. Gaines' approach to production suited Blue just fine. As he recently told Tape Op magazine, "I try to capture a little bit of live-ness to the music ... . I do it today with a lot of bands that work with me. I look at it as if you're going to see a live performance. That's the sound I want to hear, except with us in control."

And that's precisely what you get with Fish in Dirty H20. To hear Blue tell it, working with Purdie made live-tracking easy. "We drive each other, because we drive for perfection. We had nine one-take songs on this 13-track record. With Bernard, you get it the first time. But I had other great people in the studio. I had [former Stax and Enterprise keyboardist] Lester Snell, I had Dave Smith on bass, and most of the time I had Will McFarlane on guitar. Bernard is cerebral. We'd discuss it, and then we'd hit it. And we had a ball at it."

Overdubs of horns, background vocals, and other textures were added later. But one overdub in particular took the album in a direction unheard of on almost any blues record to date: a rap by one Al Kapone. "Al texted me and said, 'C'mon I wanna be on your record'," says Blue. "And I said, 'Funny you should say that ... ' So he sent me back a scratch track. I almost fell to the floor. So Jim's sitting at the computer, we're listening to it, and he says, 'Barbara, I love it. But I'm gonna tell ya, my professional friends are gonna think I lost my fucking mind!' The cool thing was, Jim had never seen anybody rap like this before. And Al knew exactly where he wanted to be."