I can remember being a child of 6 or 7 and playing with a neighbor's dog on the gray, nail-scarred porch of a relative's house somewhere in the vast and verdant emptiness of rural Tennessee. An older male relative — a great-uncle perhaps — approached and touched my shoulder in that creepy way only men who may or may not be your great-uncle can. He said, "You know, son, me and that there dog, we have an awful lot in common." And being a precocious brat given to speaking in badly mimicked Shakespearian prose, I countered the old man, asking, "Tell me, cousin, beyond your love of wagging, how can that be so?"

"In this world," he answered too somberly, "if you can't eat it or screw it, piss on it." And then he walked away.

I've carried those silly words with me for more than 30 years, but I never found much use for the crass metaphor until I sat down to ponder the relative merits of Bark! The Musical. Finding the show unappealing both sexually and gastronomically, I was overcome by a nearly irresistible urge to raise my leg and water all the lovely Lon Anthony statues in Theatre Memphis' sculpture garden. As much as I'd like to applaud TM for breaking from its habits and staging original work composed by a native Memphian, I just can't do it.

Bark!, a cutesy musical revue about a bunch of dogs hanging out at Dee Dee's Doggie Daycare, is enough to make even an avid Andrew Lloyd Webber detractor say kind things about Cats. At least Webber's creative team had the good sense to forgo too much talk about loving humans and smelly litterboxes in order to tell a story about the secret life of cats who come together in a dark alley to celebrate an arcane feline ritual. Cats, at least, has something like a plot and builds to a climax. Bark!, by comparison, is a narrative-free collection of 22 songs about all the 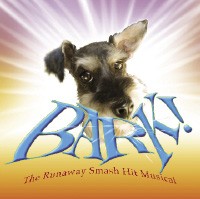 things we love, hate, and love to hate about dogs, performed by five actors in silly spandex dog costumes. Bark! has poop songs, pee songs, butt-sniffing songs, leg-humping songs, and songs with enough sentimental tear-jerking to fill three remakes of Old Yeller. The most positive thing I can say about the musical is that fans of the Christopher Guest mocumentary Best in Show might get a real kick out of it, if and only if, they can pretend it was actually written by Parker Posey.

Sample lyric: "You fill my bowl. I fill your soul." And there's more where that came from.

The most tragic thing about Bark! The Musical (other than the fact it's yet another "Colon! The Musical" musical) is that the cast is so darn committed, gifted, earnest, and entertaining. The harmonies are tight, the solos heartfelt. The dancing ambitious, energetic, and excellent. But for what? For a children's show that's an act too long with too many references to humping, bitches, and cutting off testicles to make it appropriate for children? Nevertheless, Jonathan Christian, Stephen Garrett, Stephanie Kim, Lynden Lewis, and Jesus Manuel Pacheco all deserve super-trouper awards for making something so hard to watch look like a lot of fun to do.

I can't say enough kind things about Theatre Memphis' resident costumer André Bruce Ward. But Christian's shiny silver hound-dog costume makes him look more like a bounty hunter from the Star Wars universe than any of man's best friends. The remaining costumes transform the actors into refugees from a hippie colony founded by Raggedy Ann and Andy. Conversely, the digitized scenic design by Daniel A. Kopera is as innovative and visually exciting as it is practical.

Bark!, for all its problems, should play well in Memphis. It has had successful runs in L.A. and Chicago and will soon be opening off-Broadway in New York, where it will also find an enthusiastic audience among dog people and furry fetishists. It is cute by design, and for some folks, a collection of sweet pop melodies about fleas, catching frisbees, and farting in your sleep is just what the veterinarian ordered.

The musical compositions by former Memphian David Troy Francis borrow expertly from gospel, blues, doo-wop, and hip-hop traditions. Taken one at a time, they are as adorable as a pound puppy. But without a story to tell, they just lie around the room like an old gaseous mutt who likes to chew the furniture.