Won't you be my neighbor?

As Halloween grows near, the residents at Number 10 Main Apartments are busy conjuring up creepy costumes. The building's elegant lobby is festooned with spider webs hanging from the light fixtures, and skeletons are seated primly in the hallway. The decorations add a playful touch to otherwise buttoned-down surroundings. There will be more, the manager assures me, since each year, Number 10 plays host to a kick-ass costume party. It started out as a rather modest affair, a mixer designed to bring residents together, but over time, its popularity (not to mention the popularity of those who reside here) has grown. Last year's bash attracted 400 to 500 revelers, making it one of the more anticipated neighborhood parties downtown.

"A lot of residents like to get involved with putting it together," notes building manager Greta Hollingsworth, whose father, Jay Hollingsworth, and Henry Grovesnor converted the former bank into a 112-unit apartment building in 2000. "We have a lot of chefs who live in the building, and they bring in food from their restaurants," she says. Others help out by getting the rooftop ready or determining which band will play.

The party creates a sense of belonging for residents — about half of whom have lived here since the building opened — and that belonging creates community. In addition to the Halloween romp, Hollingsworth says residents gather for wine tastings on the roof deck, with its expansive views of the Mississippi River, or to watch ballgames together. There's even talk of a local restaurant offering to teach a pastry-making class. "A lot of people show up, even to watch the smaller things like the basketball and football games," Hollingsworth says.

People who live outside the city might think of urban life as sterile, devoid of the neighborliness of suburban life. With 28,000 people now calling downtown home, it's not exactly an intimate place. And living in a townhouse, condominium, or high-rise can bring a certain autonomy. But while the suburbs promise a bucolic life filled with backyard barbecues and garage sales, "You shut your garage, go into the backyard, and that's it," notes developer Phil Woodard, who lives in the South Main Historic District and has played a hand in its growth. "Here, it's hard not to socialize with your neighbors," because the street essentially becomes your front yard.

When Woodard and his wife, Terry, moved downtown in 1996, South Main was still "pretty quiet," with many of the neighborhood's old warehouses and working-class hotels empty and shuttered. While the couple knew a lot of Memphians through their construction and wine businesses, "I found another group of people downtown. They were definitely more liberal and more diverse," Woodard says. Perhaps because of their pioneering vigor, a certain esprit de corps knitted early residents together. As the Woodards began refurbishing their building, they met their neighbors, either out on the street during evening walks, or, such as in developer Henry Turley's case, when residents moseyed inside to find out who was behind the dust.

As South Main's reinvention began to blossom with art galleries and boutiques, it was Woodard who helped create the trolley art tours back in October 2000. "I think the first one only had five people," he says with a laugh. "I put my mother and [a local musician] on to sing, along with some champagne. We didn't have a lot of folks, but they had a great time." His idea was to create a focal point for the neighborhood, one that would bring people together and generate a buzz — not to mention sales — for the district's galleries. "Now it's more of a social thing than an art thing," Woodard says. "But it's also having an economic impact on businesses on South Main. For many, it's the best day of the whole month." The tour has also succeeded in bringing people downtown to see for themselves what living in the city looks like. 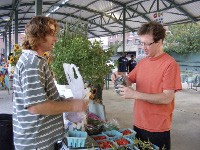 The diversity of downtown's residents also holds appeal. Though you'll certainly find plenty of native Memphians, there are also urban transplants from cities such as Boston, Los Angeles, San Francisco, and New York. Buildings like 10 North Main boast an eclectic mix of professionals as well, who are post-college and middle-aged, financial analysts with Morgan Keegan, newly minted doctors, chefs at downtown's tony bistros, court clerks, lawyers, even "the guy who does the Memphis panhandling Web site," says Hollingsworth. "Yep, he lives here too."

But it's neighborhood activities like the trolley tour, and, more recently, the Memphis Farmers Market, that provide a gathering place for residents to connect and catch up on each other's lives.

"Once I started living down here, I began to think of it as the show Cheers, where everyone knows your name," says Diane Gordon, a resident who also has her interior design business on South Main. "You can go into an establishment and people get to know who you are."

Gordon and her husband first bought their loft condo two years ago as a weekend escape. She wanted to learn more about the community, so she began attending neighborhood association meetings. "I think the people here were more welcoming because of the influx of different locations that they came from," observes Gordon. "I didn't feel the competitiveness of the suburbs." Now president of the South Main Association, Gordon says her move downtown has awakened a sense of community activism she didn't feel compelled to pursue when she was living in the suburbs. Here, in this growing neighborhood, there were more possibilities.

Sharon Leicham, a transplant from the San Francisco Bay area, agrees. When several residents began talking about farmers markets they'd experienced in other cities, it didn't take long for the idea to gain momentum. As one of the co-founders of the Memphis Farmers Market, Leicham likes the sense of possibility life in the city has afforded her, not to mention the ease.

"Here I can walk almost everywhere to get my hair and nails done. I can walk to Easy Way for vegetables. I can do almost everything downtown without a car, and I do."

In her 24-unit building, residents organize progressive suppers to strengthen ties that first form while picking up the mail or walking the dog. The Farmers Market, a Saturday ritual for many downtowners, has provided another opportunity for community building.

"A lot of people have withdrawal when we close [for the season], because we have regulars who've developed relationships with some of the farmers," Leicham says.

While those relationships might slow as the market goes on hiatus, there are plenty of other opportunities for downtowners to rub shoulders. With the RiverArtsFest celebration happening this weekend on South Main, and the holidays just around the corner, folks will no doubt find ample ways to knit themselves together, strengthening the neighborhood one relationship at a time.