The works of David Comstock, Glennray Tutor, and Kit Reuther.

The black rods and white ovals that make up David Comstock's large enamel paintings in the exhibition "Flow" are some of the most expressive and sexually charged artworks currently on view.

The stakes are high in the thickly impastoed board game of life and death that Comstock plays out on the walls of L Ross Gallery. Large ovals look like inner sanctums and the lens through which we look at life. Everything feels slowed down, and every sensation is recorded on Comstock's collages of frayed canvases that resemble torn membranes and scarred skin.

A thick black rod surrounds the ovum at the center of Untitled Green 003. Other lines slash across the canvas. One of these lines arcs down, pierces the egg-shaped core, and infuses the canvas with spring greens.

Negative Positive 002, the smallest canvas in the show, is the rawest. In this X-ray (and x-rated) version of the game, a white rod explodes inside the painting's pitch-black core. In Passing, we don't see the rod pierce the "egg," but the yolk is broken and flows across the surface of the painting in washes of ochre and lemon.

In Comstock's board game, every rectangle and square looks like a moment of psychological, emotional, or physical checkmate. In painting after painting, the thick black lines that surround, slash across, and penetrate egg-shaped centers simultaneously suggest not only injury/death but also birth/nurturing/sexuality, making "Flow" one of the boldest games in town.

Glennray Tutor's meticulously rendered oils of brand-new toys tightly packed into heart-shaped boxes make me long for the gunk and disarray of burnt-out fireworks and broken action figures. The three extraordinary pieces in his current exhibition, "Recent Works," at Jay Etkin Gallery, plumb the depths of human experience with marbles and comic books.

Three iridescent marbles, painted equidistant from the center of Trio, orbit like tiny planets on top of a romance comic book published in the '50s. The shadow of a purple-pink cat's eye falls across the faces of two lovers about to kiss. Another marble, a swirl of yellow-orange, tops the final frame where much of the image and many of the words are cut off by the edge of the painting. What's left are bits and pieces that read, "Lovely sweethearts ... Moon ... down on us ... so softly, so wisely ... came true all over again." 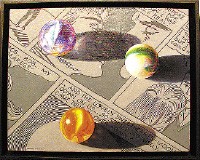 Since the publication of this romance comic some 50 years ago, many moonstruck sweethearts have discovered that the course of love is not as predictable as that of the planets and their moons. Tutor's experiments with marbles and true romance establish that this artist, in addition to being a skilled hyper-realist, is also a campy metaphysician whose insights are bittersweet and wise.

At first glance, Kit Reuther's six large oils on canvas look like depictions of weeds blown across barren landscapes. A closer look at her exhibition "Organikos" at Perry Nicole reveals a seemingly inexhaustible variety of colors and forms scattered across expanses of canvas.

One idea leads to another in works such as Blueline, in which blue washes and expressive shadows create giant squids that shoot out streams of ink, dried grasses poking through crevices of snow, and the tendrils of seaweeds floating in a deep-blue sea.

Shapes in Marabisque morph from doodles to pearls in oyster shells to peas in pods into an oval mirror. Scumbled gray lines lie near the center, with the artist topping off her fertile free-associations by floating a child's bright red whirligig above the briar patch of lines, while at the bottom, she sprouts daisies from an impasto of primordial green ooze.

Reuther's method of generating a form then building on that idea to invent new forms reminds us that consciousness of the ever-evolving environment is not always best expressed by hyper-realism, vague impressionistic play of light, or the reductive geometry of minimalism. Reuther, with rich imagination, captures dynamic interaction in life between sensory stimuli and response.