Our readers choose the best stuff to do around town.

Ever complained that there's nothing to do in Memphis? This section of the ballot is filled with the best and brightest of the city's art institutions and leisure activities. Check it out and check your schedule. You'll be busy all year.

Another thing worth checking is number 3 in the "Best Grizzlies Player" category. Looks like new recruit O.J. Mayo is building excitement for the upcoming season.

"There's a very active art thing here, but I can't account for it, except that it strikes in some places and not at all in others." That's the late Shelby Foote talking about his hometown, Memphis. But he could be talking about the David Lusk Gallery too, where there's been a very active art thing since 1995. Located in the Laurelwood Shopping Center, it's a gallery committed to artists working in Memphis and the greater Southeast — from the acrylics of Carroll Cloar to the installations of Terri Jones. The packed art openings at David Lusk? Evidence local art lovers consistently vote it "Best Art Gallery."

2. Playhouse on the Square

"Where Broadway meets Beale": That's what the Orpheum advertises, and the Orpheum means it — and more. Like: the historic theater's recent 80th anniversary gala, a performance by David Byrne, and a touring-company production of Broadway's Avenue Q. Next month, it's the ever-popular Mamma Mia!. Add in the majestic theater itself, and the Orpheum makes any night at the theater a night to remember.

2. Malco Studio on the Square

Looking for an extra-wide, extra-tall movie screen, 60,000 watts of Dolby Digital surround sound, large-format projection, and a coffee bar/pizza cafe? Look no further than this East Memphis movie house. Make that houses. It's where you'll find the 17 first-run movie screens that make up Malco's Paradiso, and it's all state-of-the-art — down to the rocking-chair comfort of the stadium seating.

The Mud Island Amphitheatre has it coming and going: a view of the river as you're heading to a concert; a downtown backdrop as you're enjoying the likes of Robert Plant and Alison Krauss together in concert last summer.

1. The Links at Galloway

3. The Links at Overton Park

Set within sight of one of the city's prettiest residential neighborhoods off Walnut Grove, what used to be the city's Galloway Golf Course became the Links at Galloway in 2002 after a multimillion-dollar renovation. But it's still 18 holes. It's still a beautifully laid-out public course. And Memphis golfers know to dress accordingly (no tanktops or cutoffs, please). Flyer readers know a good thing too. The Links at Galloway gets this year's vote for "Best Golf Course."

Seventy game tables and more than 1,700 slot machines: If the action at the roulette wheels, the dice tables, the card tables, and the slots aren't enough to draw you to Horseshoe Casino in Tunica, what will? Maybe Horseshoe's hotel, its buffets, and its popular stage shows inside Bluesville. For fine dining, there's Magnolia: A Delta Grille. For some fine golf, there's the Links at Cottonwoods. What's more: Horseshoe's the site of the World Series of Poker main event next February. Flyer readers know a good bet too. They consistently vote Horseshoe a casino at its best.

You're there with the family to watch the game or just enjoy the outdoors? Both, because you're at AutoZone Park in downtown Memphis. So relax. You and the kids may be supporting Memphis' minor-league baseball team, but there's nothing minor about this state-of-the-art facility (or its affordable ticket prices). Rocky the Redbird makes the park his playground. Memphis fans and families do as well.

With an edge-of-your-seat season like the last one, no question about it: Men's Tiger basketball is da bomb, aka the BOM — the Best of the Best of Memphis in this year's Flyer poll. Look for the coming season's court members — including frosh phenom Tyreke Evans and master of the court Coach John Calipari — to be not only the focus of the city's attention but also the country's. The Tigers had it going in San Antonio last April. Wanna bet they will again when next year's Final Four meet in Detroit?

Number 22, forward Rudy Gay: Make him a hands-on favorite with Memphis Grizzlies fans as a leading scorer and a breakout winner as "Best Grizzlies Player" after only his second season with the team. But take it from one who knows the guy real well: UConn coach Jim Calhoun, who said, "He doesn't yet realize it, but he is unstoppable. ... It is going to take an NBA superstar to lock him up." Lock up this Grizzly? Not when he's netting an average 20 points per game.

Best Of voters may have chosen him "Best Local Athlete," but Joey Dorsey isn't local any more. He's now with the Houston Rockets. Before becoming a Rocket, though, he was a Tiger. As a kid in Baltimore, he saw his share of mean streets. As a forward and record rebounder for the University of Memphis men's basketball team, he saw his share of winning streaks. But as for his being a little outspoken himself ... well, we'll let somebody else this time do the talking: In last April's Final Four win — the U of M over UCLA — the Tigers' mascot wore a T-shirt that read, "Dorsey for Mayor." This year, Flyer readers gave Dorsey the winning vote. 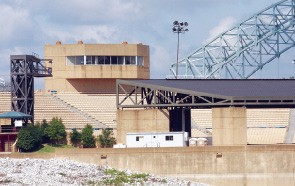