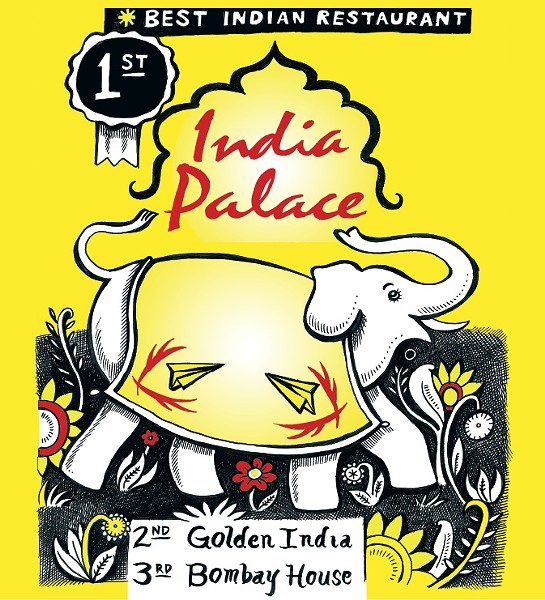 We'll admit we find it adorable when, in the "Best Chef" category, you write in "My Wife," "My Husband," or, better yet, "My Mom." (The answer "Your Mom's House" for "Best Romantic Restaurant" is not so cute.) Chef Boyardee didn't stand a chance with only two votes for "Best Chef," but at least he's got bragging rights over Mrs. Winner who, despite the name and the chicken and biscuits, got only one vote. 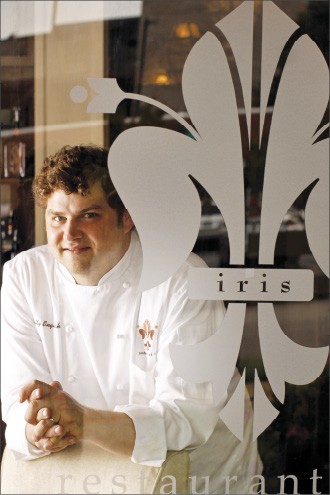 Last October, Food & Wine magazine named Kelly English one of the Top 10 "Best New Chefs" for 2009. That was quite the honor. Now Flyer readers have vaulted English to the top spot for the first time.

Hey, you know all those other restaurants that were in the running for "Best Lunch" in Memphis? Stick a toothpick in 'em. They're done. Huey's gets the nod for lunch nosh this year.

Maybe it's the desserts. Or maybe the soft tinkling of the ivories. Or maybe just the wonderful menu, nice wine list, and warm ambience. Paulette's is a classic.

Owen Brennan's sits at the cusp of Germantown and East Memphis, but it draws Memphians from all over for its New Orleans-themed Sunday brunch: the best in town for 2009.

Le Chardonnay moved across Madison Avenue a couple years ago, but it has retained its dark, ski-lodge-y charm, its extensive wine list, and first place for "Best Wine List" in your hearts.

Folk's Folly valets meet you at the curb. Once inside, you hear sweet piano-bar stylings and the sound of cold drinks and cocktail chatter. But who are we kidding? It's all about the steak here, and Folk's Folly's steaks sizzle!

Central BBQ takes top honor in what is probably the toughest category in this poll: "Best Barbecue." No matter how you spell it — barbecue, BBQ, Bar-B-Q, whatever — Central's on top again.

The Rendezvous is sometimes derided as a place where tourists go to eat Memphis' most famous food group (16 barbecued ribs), but the Flyer's poll makes it clear that locals love the Rendezvous as much as people wearing Elvis T-shirts. And well they should.

That "BOM" designation means Huey's has won "Best Burger" for so long that it's not even fair to anybody else in the running. Lots of places in Memphis make good burgers, but only one takes the top spot, year after year after year.

With five Memphis-area locations, 14 sauces (ranging in heat from "Blazin'" to "Sweet Barbecue"), and TVs set to sports everywhere you look, Buffalo Wild Wings is leading the city's wing scene.

If you want to eat lunch at Gus's, you'd better get there early. Folks line up for the crispy, smoky, spicy uniqueness that makes Gus's fried chicken better than anybody's in Memphis. Or in the world.

The Bayou, like its sister restaurant, Le Chardonnay, hasn't missed a beat by moving across Madison. It's bigger, but it still has a nice patio, cold beer, stellar gumbo, and lots of other Cajun delectables.

What's more Midtown than this: Greek-Korean fusion in a restaurant housed in a former gas station/garage, with patio seating right next to the pumps? Spanikopita, moussaka, falafel — Petra is Greek delicious. And the Korean soups and kimchi are fabulous too.

Restaurants come and go, but Paulette's "K-Pie" is a constant. Rich coffee ice cream in a pecan-coconut crust, topped with whipped cream and Kahlua, the Midtown institution's Kahlua-mocha parfait pie is a classic but not their most popular dessert. That designation apparently belongs to the restaurant's hot chocolate crepe. With crème brûlée, Key lime pie, and other desserts dotting the menu, Paulette's is where Memphians go for post-dinner sweets.

Long synonymous with Italian dining in Memphis, Ronnie Grisanti's closed its doors in August after a 25-year run at its Chickasaw Oaks Plaza location on Poplar. But Memphians won't be without the Grisanti family's authentic Tuscan cuisine, which has delighted local diners for generations. Most of the restaurant's staff — including Ronnie himself — will relocate to the family's Germantown location, Elfo's, which will be renamed simply Grisanti's.

National chain P.F. Chang's became a big local hit when it opened its lone Memphis location — on Ridgeway in East Memphis — a few years ago. In P.F. Chang's large, opulent dining room, patrons can feast on a diverse array of Chinese classics such as Mongolian beef, ginger chicken, and spicy dumplings.

This no-frills Midtown eatery has a loyal clientele because of its focus on the food, which includes authentic Vietnamese specialties — fresh spring rolls, great pho soups, vermicelli and tofu dishes, and plenty of vegetarian options.

Restaurateur Jimmy Ishii has come to define Japanese cuisine, and particularly sushi, in Memphis. The local chain is celebrating its 20th birthday this year, first opening its Humphreys Center flagship restaurant in 1989 and now covering the city with five locations. 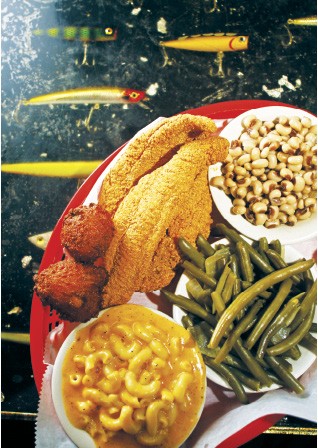 For exquisite catfish and hush puppies and a big daily selection of veggies, it's hard to order anything else off of Soul Fish's menu. But try their smoked half-chicken, and you'll be doubling up on meals to satisfy all your menu urges.

Whole Foods Market, a foodie oasis on Poplar Avenue in East Memphis, is more than a grocery store. Its large prepared-foods section — pizzas, sandwiches, salad bar, bakery, coffee and juice bar — and dining area make it a popular lunch and dinner spot for vegetarians and health-food enthusiasts, in particular. Whole Foods also offers cooking classes to help you find interesting things to do with the fresh and healthy items they sell.

The anchor restaurant of Cooper-Young does it again, taking "Best Seafood" for the millionth year in a row. Scallops, sea bass, mussels, you name it, Chef Ben Smith and crew deliver a ship full of great taste in a sophisticated atmosphere.

Memphis Pizza Café was an instant hit when it opened in 1993 and has since expanded its local pizza empire to five locations, all serving tasty, crispy pizzas, including such faves as the white-sauce "alternative" and the zesty Cajun chicken.

What says Midtown more than the intersection of Madison and McLean? And what says a great deli sandwich better than Fino's from the Hill, on that very Midtown corner? In addition to the popular made-to-order sandwiches — cold cuts, cheeses, toppings, all on good crusty bread — Fino's offers pasta dishes and grocery items. That's Italian!

Jeff Frisby at Restaurant Iris must be doing something right. Last year, he was named one of the city's best servers in our Best Of poll. This year, he's done it again. Must be that Frisby knows not only how to serve, he knows what to serve when it comes to vino: He's Restaurant Iris' wine manager. (Factoid: All our winners in this category work in Memphis' new or newish restaurant/bars. Good to see Flyer readers appreciate the city's evolving food scene.)

Drive-thru or in-store, the crew behind the counter at any of Memphis' Chick-Fil-A locations have it down pat: your order in your hands — fast. More amazing (and given the volume of business), they do it, hands down, with the friendliest service in town. 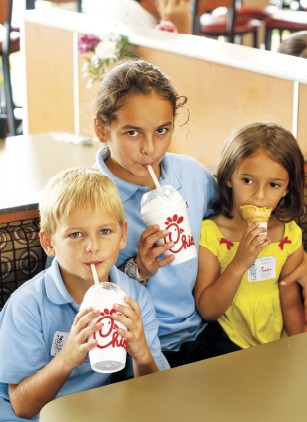 We forgot to mention (see "Best Service") that the crew at Chick-Fil-A must have nerves of steel. As a new winner in the kid-friendly restaurant category, these folks have what it takes when children combine with fast food. Call it grace under pressure.

And we mean late. We're talking, at several of Huey's multiple locations, a kitchen that's open until 2 a.m. Don't deny it. At that hour and after some damage, what your body's craving is a burger and onion rings.

The corner of Beale and Second: The wide-open windows at downtown's Flyer Saucer aren't there for no reason. Whether you're in the restaurant or passing on the sidewalk, this place was tailor-made for people-watching. Evidence: During the Memphis Music and Heritage Festival a few weekends ago, the place was jamming, inside and out.

In a word: trivia. Celtic's popular Wednesday-night tournament this past summer had the patio packed. Any night, any season, though, will do for a Guinness and some major hanging-out in Cooper-Young. Bonus attraction: On this patio, you're only a few steps from the scene on the street.

Another new winner in our Best Of poll: Garibaldi's Pizza — established 30 years ago by owner Mike Garibaldi — has three locations for handmade pizzas, pastas, salads, wings, sandwiches, sweets, and more. Garibaldi's caters to not only what you're hungry for, according to readers, it really delivers. 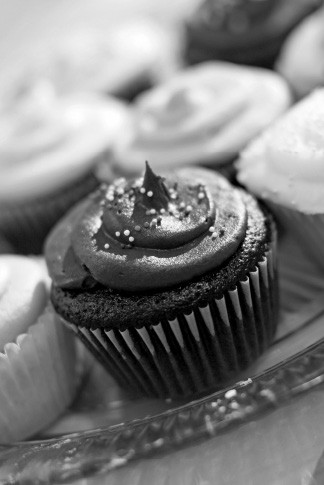 Again: a new winner. And, according to Muddy's website, if you're rude, whiny, impatient, or otherwise unpleasant, forget stepping inside this bakeshop. If you're green-minded and egg-headed (Muddy's uses eggs from cage-free, free-range hens), you're welcome! Plus, who's to argue with a cupcake called "Prozac?"

High Point Coffee just closed. (It's the economy, stupid.) But Otherlands, Cafe Eclectic, and Republic Coffee — the hotshots rounding out your picks for best local coffeehouse — havestill got their vibe going and the caffeine coming.

Iris: It's in the eye of the beholder. Restaurant Iris, "Best Restaurant," according to Memphians who value fine dining. In the space of a year, nationally recognized chef Kelly English has succeeded in turning Restaurant Iris into the city's go-to address for exceptional French-Creole-inspired cuisine. Doesn't hurt that the restaurant also features first-rate service in an intimate, romantic atmosphere.

The interior's gorgeous, but it's the food at Flight that has Flyer readers hooked — and voting. Flight's "flights" — a trio of tastings from the entrée, dessert, and wine menus — make it a wonderful way to sample what's cooking in the kitchen. What's on your table: small plates but great taste. Or you want regular-size portions? No problem. You can order that way too.