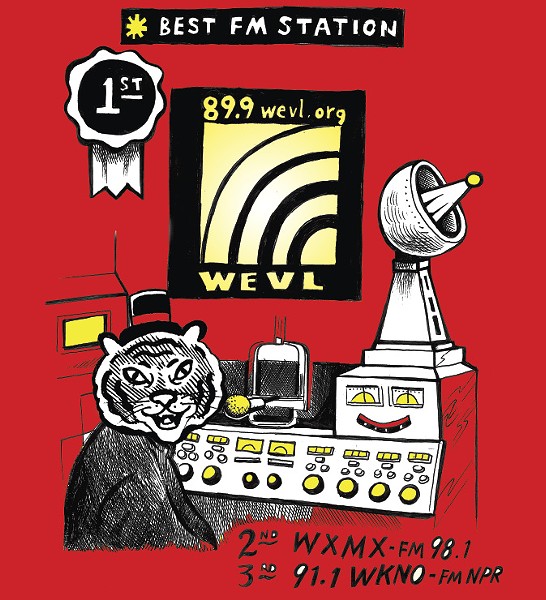 Though modern-rock station 93X was punted this year to make way for ESPN, it still garnered votes, along with pleas to bring it back. One media personality, despite making the Best Of consistently, was also unplugged this year. The response? A smattering of support and one voter noting since that person's departure, "My ears hurt less."

To misquote Mae West, when Chris Vernon is glad he's very good, but when he's mad he's better. To hear him raging about the Grizzlies or John Calipari is a thing of beauty. No homers allowed on the Chris Vernon Show.

Pulling down honors for "Best Drive-Time Show" and "Best Local Radio Talk Show," Drake & Zeke in the Morning is the 500-pound gorilla of the Memphis radio dial. They're so badass, they air the same show twice Mondays through Thursdays (Drake & Zeke After Dark) and are reportedly looking for a way to crack into the elusive 5 o'clock time slot.

One-half of the aforementioned radio behemoth Drake & Zeke in the Morning, Drake Hall eats lightning and craps thunder. Drake Hall counted to infinity — twice. Drake Hall can slam a revolving door. If you spell "Drake Hall" in Scrabble, you win. Forever. Jesus turned water into wine, and then Drake Hall turned it into beer.

Are we miffed that a Flyer columnist didn't make the cut? Well, sure. But when the prize goes to a nice fellow like Mr. Calkins, we don't mind so much. Not only is this Harvard-educated lawyer-to-be one of the best sportswriters in town, he's not afraid to lend his voice (and column) to other civic issues. Add this honor to your shelf of prizes, Geoff.

Some of us old-timers remember when Dave Brown was the voice of Memphis wrestling, but in later years he certainly found his niche as our readers' favorite meteorologist. Maybe it's that striking white hair, or maybe it's the 30-plus years on television, but with his air of calm authority Dave makes us feel safer when he's warning us about the latest storms heading our way.

Jarvis Greer's "Friday Football Fever" may be the best thing on local news each fall, and the weekly pep squad of local high school cheerleaders rowdily enthusing the pigskin highlights is eclipsed only by Greer's gleeful sports salesmanship.

He's quite possibly Christian Brothers University's most famous graduate, and Joe Birch, who recently celebrated 30 years in television, has become the face of local news and a consistent winner in the Flyer's Best of Memphis poll. It doesn't hurt that he's a darn nice guy, who devotes so much time to local charities that we don't even have space to list them here.

What can we say? We try, and apparently you like what you see. Thank ya very much.

3. Chris Herrington, Beyond the Arc, memphisflyer.com/blogs/BeyondTheArc

Ryburn's blog is subtitled "Daily thoughts of a Downtown Memphis resident," and that's an apt and significant descriptor. Unlike many bloggers (none on this list, mind you), Ryburn didn't punk out after a few posts, and Ryburn doesn't take days off. The blog is an extension of Ryburn, and he gives downtown a little extra personality.

Wittily pithy (at 140 characters an entry), @theogeo is queen of the Memphis Twitterati. A couple recent tweets: "When I make my biopic, the soundtrack is going to be nothing but Richard Marx." And: "Ahhh, Nashville. Your performance lesbians make me want to barf. And your men are even more repulsive for watching." Love her.