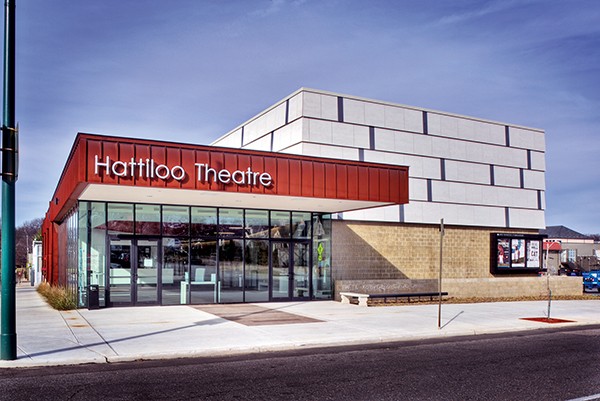 The Hattiloo Theatre recently completed its first season in its new custom-built home on Overton Square and is currently celebrating a 10th anniversary. Since arriving on the Square the Afro-American-centric theater company has maintained its focus while partnering with groups like Indie Memphis and New Ballet Ensemble. Perhaps, more importantly, it's become home to regular panel discussions and forums about culture, history, and social justice. From zero to institution in 10 years is impressive. And if this first year in the new space is any indication, the best really is yet to come. — Chris Davis

I don't eat hamburgers all that often, but when I do, I like to do it right, so I go to the Oshi Burger Bar downtown and order the Oshi Burger ($12). This thing is ridiculously good: wagyu Kobe American beef dressed with a soy glaze, shiitake mushroom tapenade, Swiss cheese, and umami mayonnaise. Banzai! — Bruce VanWyngarden

Made up of members of the Sheiks, Blackberries, and Aquarian Blood, Chickasaw Mound deliver soulful garage rock like no other band in Memphis. Singer Jesse Davis is one of the most promising local front men in recent memory, and his backing band of seasoned players speaks for itself. Save this band's debut single because it'll be worth a small fortune one day. — Chris Shaw

If you haven't taken the nation's tallest free-standing elevator to the top of the Bass Pro Pyramid yet, now's the time, now that the summer crowds have thinned. It costs $10, but there are drinks and appetizers awaiting at the top — along with an incomparable view of Memphis and the Mississippi River. — BV


South Main has everything you need to blow an out-of-town guest away when visiting Memphis. The hauntingly cool Earnestine & Hazel's, the historic Arcade Restaurant, the hip Love Pop Soda Shop, and all of the amazing local boutiques like Hoot + Louise help make a Memphis day and evening a memorable one. If you want to show someone what Memphis is like, take them down to the arts district, especially on the last Friday of the month — you won't regret it.
— Alexandra Pusateri

Best Future Site for a Public Art Graveyard: The Greensward

Every city that has the bravery to commission public artworks should have the discretion to also designate a "Public Art Graveyard" where, when bulky artworks wear out their public welcome, they can be gracefully retired. The Public Art Graveyard would be an open space where children and animals could roam peacefully amidst statues glorifying questionable people, giant metal abstractions, and superannuated corporate fountains. The Overton Park Greensward, that out-of-the-way patch of grass recently commandeered by the Zoo for parking space, would be a perfect place for Memphis' yet-unrealized Public Art Graveyard. — Eileen Townsend

All hail the dive bar that could. Not only does Murphy's give all the door money to the bands performing, they also have a dedicated sound person who goes the extra mile to make touring and local bands sound as good as they possibly can. Tip your bartender and buy Alyssa a drink when you see her behind the sound board at Murphy's, she deserves it. — CS

We're still in disbelief that LYFE Kitchen, the healthy fast-casual restaurant chain, moved their headquarters from tech-obsessed Palo Alto, California, to barbecue-obsessed Memphis. But they did, and we're thrilled about it. LYFE, which stands for Love Your Food Everyday, offers wholesome gourmet meals in a casual fast-food environment at their East Memphis location. Nothing is fried, and no white sugar or white flour is used. And you won't find a soda on the menu. You will find lots of vegan and gluten-free options, creamy smoothies, salads, wraps, and even breakfast. We're fans of the veggie burger with avocado and smoky pepper aioli on ciabatta bread with kale salad on the side. LYFE will soon be opening a second location downtown in the remodeled Chisca building. — Bianca Phillips

Best Reason to Save the Coliseum: Memphis' Preservationists

Remember when a developer said Midtown's last best chance for Overton Square was demolishing all the existing buildings and erecting a suburban-style grocery store where the parking garage now stands? Because that almost happened. Today, Memphians turn out in huge numbers to enjoy free concerts at the Levitt Shell in Overton Park. They can do so because, for 20 years, a group called Save Our Shell kept it from being torn down. We enjoy Overton Park because an even earlier group of activists kept it from being cut in half by an interstate extension. Today music tourism pumps hundreds of millions of dollars into Memphis' economy annually even though Beale Street was leveled and mostly shuttered into the '80s. Stax was completely demolished, and Sun was once empty and ripe for redevelopment. Even if you don't know what the Coliseum might someday become, you've got to give credit where it's due: The preservationists have a pretty good track record. — CD

Technically, Station No. 3: The Memphis Firehaus had not started as of press time, but we already know it's going to be best beer garden of 2015. That's because the team behind the fall pop-up event at the abandoned firehouse at Third and MLK has already hosted one awesome beer garden this past spring — The Revival at the Tennessee Brewery. Now Benjamin Orgel, Paul Stephens, Logan Scheidt, and J.C. Youngblood are taking the concept to the old firehouse. Every Thursday through Sunday, from October 1st through November 30th, Station No. 3: The Memphis Firehaus will be open with local craft beers, food trucks, live music, and Griz-watching parties. — BP

All my fellow WYPL nerds, can I get a WOOP WOOP!?

Memphis Public Library 's WYPL radio station offers readings of books and local and national publications as well as other programming. There's a certain comfort in the routine of WYPL — the reading of the sports section or TV section of The Commercial Appeal in the mornings, etc. I've picked up more than a few books after hearing a half hour or so on WYPL. And then there's the great pleasure of how various readers handle omitting the bad words from copy. My favorite is "expletive deleted." "The man said, 'Now hold on, you expletive deleted! You're telling me that expletive deleted just expletive deleted my wife?'" It's expletive deleted awesome!

One reader who's caught my ear is Janet Sides. I once heard her read a story from the Flyer. I knew the story was good, but when Sides took it on, she made the story sing — the cadences of her voice taking the listener through a wild ride, an expert pause after a joke a tonal rim shot. And great respect to her for her tackling of James Clavell's epic, over 1,000-page Shōgun. — Susan Ellis

The 2015 Best of Memphis winners gathered to celebrate at the Pipkin Building on Tiger Lane on Wednesday, September 30, 2015. Photos by Don Perry.