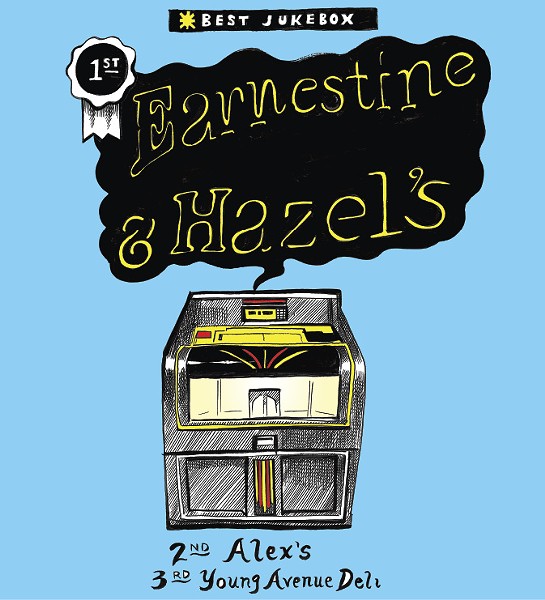 The category "Best Pick-Up Joint" is a fount for interesting responses. To wit: There were two votes for No Regrets Tattoo Emporium (second-place winner of "Best Tattoo Parlor" in Goods & Services). "I always did well at Young Avenue Deli," one voter helpfully responded. 201 Poplar got a vote, as did a couple of places that were too disturbing (and potentially illegal) to include here. For the voter who entered "You tell me," see below.

Minglewood Hall, located in the old Strings & Things building on Madison, bounced onto the Memphis music scene with a bang. Boasting a massive seating area, a fancy raised stage, and plenty of room for dancing or headbangin', Minglewood is Midtown's largest rock venue in decades. Since opening in February, Minglewood has hosted MGMT, Gwar, Lucinda Williams, and Of Montreal. Expect plenty more huge acts in the years to come.

2. The Sheriffs of Nottingham

This unique local rockabilly trio is no stranger to fame. Members Joe Fick, Brad Birkedahl, and Ron Perrone portrayed Johnny Cash's back-up band in the 2005 biopic Walk the Line. They even performed for Japanese prime minister Junichiro Koizumi when he was in town with President George W. Bush in 2006. So it should come as no surprise that these local faves placed number one in the Best of Memphis poll.

Amy LaVere's trademark Southern twang, accented by the deep rumble of her upright bass, has made her an unforgettable staple on the Memphis music scene. She entered the Bluff City in the early '90s as part of the Nashville-based Gabe & Amy Show, but she quickly broke free, establishing her own place in a scene deficient in rootsy Americana music. These days, she's all over the place — Craig Brewer films, the Americana Music Conference, the Austin City Limits Festival, and tons of local gigs in bars across the city.

Despite the tragic shooting of DJ Donald Munsey last year, karaoke lovers still tout this bar as the best place in Memphis to sing along to their favorite tunes.

Best Hole in the Wall

Downstairs, this ages-old bar offers pool, a generous dance floor, and a jukebox loaded with the classics. Upstairs, curious customers can explore the rooms that once played host to ladies of the night during the building's brothel days. Thankfully, the whole place is very dimly lit. The sheer age of the building, doubled with years of serving greasy burgers, gives the place a dingy vibe. Of course, isn't that what makes dive bars so special?

Newby's bills itself as the "college bar you never graduate from." Truer words have never been spoken. This roomy Highland Strip hangout attracts an even mix of University of Memphis students, college grads, and likely a few college dropouts. The crowds gather to hear live music, play pool, watch the game, or down Newby's energy cocktail: the Rock Star. 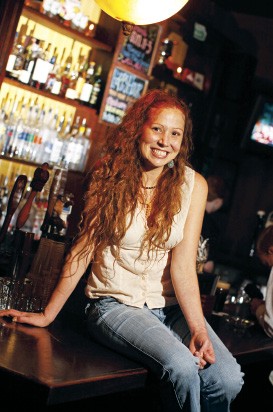 Every Monday night at Celtic Crossing, beer lovers descend on the tiny Midtown pub for $2.50 drafts. Despite the shoulder-to-shoulder crowds, bartender Tara White manages all the drink orders on her own. With 15 years experience in bartending, White knows what she's doing. Co-workers describe her as a "high-volume bartender" with a loyal following.

After a night of sipping wine and gazing at local art on the South Main trolley tour each month, patrons cram into this downtown dive for a cold beer and a Soul Burger. Though it's not open any later than many downtown bars, Earnestine & Hazel's makes for the perfect gathering place after a Beale Street blues show.

Patrons dressed to impress, a steady flow of cocktails, and live music to dance to set the stage for seduction at the Peabody's rooftop parties.

Mature ladies on the prowl know they can find hot young hunks at this South Main restaurant. Spindini boasts upscale dining and signature cocktails. It's the kind of place you don't frequent unless you've got some cash to plop down, making it even more conducive to attracting young professional men. Ladies, don your best animal print cami, order a glass of Caldora Pecorino, and reel 'em in. Roar!

Um, duh. Of course the Flying Saucer was voted "Best Beer Selection." With more than 200 beers on tap, both the downtown and Cordova locations have a huge leg over the competition. Need a pale ale? Check. How about a lager? Got it. Sample trays of beers from around the world? No problem. Beer and cheese pairings? Got it.

Best Place To Get a Martini

Not only does this historic Memphis hotel serve a tasty dirty martini, it offers some of the best downtown people-watching. Order a 'tini and plop down in a comfy chair in the hotel lobby. You won't even need a friend to chat with or a newspaper to scan. Just watch the tourists and rooftop partygoers as they amble about the hotel. Fascinating!

Best Place To Get a Margarita

Molly's La Casita is a Midtown institution when it comes to Mexican food, so it's only fitting their margaritas would find a place, as well.

Okay, yes, Chili's is a chain restaurant. But if that's a problem, you just need to get over it, because their happy hour is two-for-one and it lasts all day. And you don't even have to ask. Finish one drink, and before you even nod at the bartender, there's another.

Is it the light-up dance floor? The lone pole in the corner? The smoke machines? All of it. It's the Hollywood Disco

Want a casual place to make a nice, clean break? According to Flyer readers, the Fox & Hound English Tavern is the place to go for eight-ball, nine-ball, and all sorts of billiards. Fox & Hound has good grub, multiple pay-by-the-hour tables, and a full bar. What more do you need? Just remember to call your pocket.

Backstreet has been our readers' fave for years, but don't try to go right now. The Midtown bar was closed at the beginning of September after a police operation uncovered gambling and the unlawful sale of alcohol. At press time, the court date for Backstreet owner Shane Trice had been re-scheduled, but he's vowed that the club will reopen.

Sometimes you just want to sit and stay. Bardog is a perfect place to do just that. A new favorite downtown, Bardog is a two-story bar with a neighborhood feel, an Italian-influenced menu, and a cute logo.