Best of What They Said

Our favorite illustrations and comments from memphisflyer.com

About "Letter from the Editor" and going on tour with MGMT:
"Hanging out with MGMT is cool and everything, but is there any way you could get me Bianca Phillips' autograph? She's dreamy!" — phlo

From "It's All About Boiled Peanuts":
"Boiled peanuts are God's snack." — staythirstymyfriends

From "Memphis City Council Rules Committee Still Working on Easy Stuff" and the council's crackdown on bad behavior by its members:
"I guess one of the acceptable reasons for leaving a council meeting early is if they are legislating while impaired, huh?" — catsmeow

From "Monster Owl Spotted in Memphis, Fox 13's Lauren Lee Reports," a blog post on a TV news reporter's tweet about a 20-pound owl rumored to be attacking people in East Memphis:
"A monster owl ate my baby!" — Jeff Wilson

From "Children's Museum to Display Real Children":
"Finally, my family will get its money's worth going to the Children's Museum. (But I'm not paying to buy special feed. Those kids can have whatever crackers my kids eat.)" — Samson

From "Coaching Clarity: Two or Three Things I Know About the Hollins Situation":
"I would be totally okay with Chris Herrington as our new coach." — CWIM

From "Commercial Appeal Layoffs Show Lack of Creative Vision, Newspaper Guild President Says; May Represent a Shift in Editorial Focus":
"The CA could have Louis Farrakhan and David Duke in an op-ed on the masthead five days a week and still the paper would be in financial distress. But if you had large color photographs on the front page of the two nekkid in a sauna sharing a hookah pipe, you'd have to print extra editions. Newspapers are a business first." — CL Mullins

From "Poll Shows Tennesseans Want Wine in Liquor Stores":
"PLEASE! Think of the poor children in Arkansas who have to come to TN for higher-end grocery stores. Make it easier for us to get good wine too!" — Hannah

From "Buttercup's March Down the Peabody Red Carpet" and the duck with a prosthetic foot:
"They made the handicap duck use the stairs. Have they not heard of the Americans with Disabilities Act? They should have the forethought to have a handicap ramp. Feather brains." —CEBorst 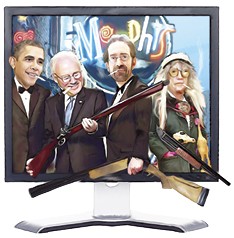 About “Talking Guns”:
“It would be easier to take hoplophobes seriously if so many of them weren’t calling for tightening laws on gun ownership while they are surrounded with armed security at their homes and places of work. I’m not just talking about the president either.”—towboatman