Tim Burton looks into one of history’s weirdest art scandals

You've seen the work of Walter Keane: kitchsy paintings of doe-eyed children staring plaintively out from pastel-colored canvases. Your grandmother probably had one in her kitchen or rumpus room, while the print of Gainsborough's The Blue Boy was in the formal living room. Keane sold millions of paintings, prints, postcards, and anything else that could hold an image in the '50s and '60s and counted Andy Warhol as an admirer. And he was a complete fraud.

Big Eyes is the story of Margaret Keane, Walter's wife, played by Amy Adams. The film opens just as she has left her first husband and struck out to make her artistic fortune in San Francisco with her daughter Jane in tow. She struggles as a single mother, making ends meet by painting babies and storks on cribs for a furniture maker, until she meets Walter (Christoph Waltz) while the two are selling paintings to tourists in Golden Gate Park. She is immediately smitten with the worldly artist, who had attended art school in Paris, while she is so hopelessly naive that she asks her girlfriend DeAnn (Krysten Ritter) the difference between espresso and reefer. When Jane's father sues for custody, Margaret hastily accepts Walter's marriage proposals. 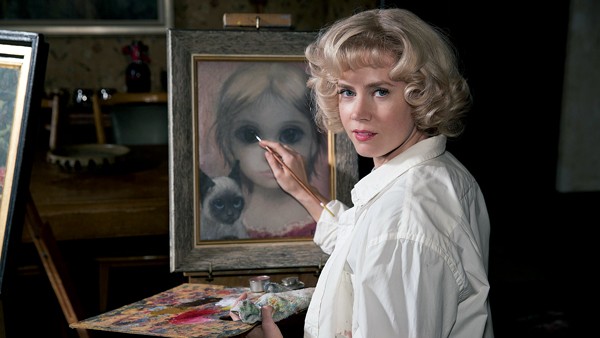 At first, things go great. Walter's got a lucrative career in commercial real estate that allows Margaret to stay home with Jane and paint. After being spurned by a pretentious art gallery owner (Jason Schwartzman), Walter hangs his and Margaret's paintings in a rowdy jazz club, where they are soon noticed by the hep cats. Margaret's sometimes haunting portraits of children with unnaturally large eyes start selling better than Walter's conventional French landscapes, and so one day when a buyer mistakes Margaret's work for Walter's, he doesn't bother to correct her. From there, the deception grows. Walter is a great self-promoter and natural entrepreneur, and he finds Margaret's proto-anime girls easy to sell. Since women can't be taken seriously in 1956 America, and the money is rolling in, Margaret tacitly agrees to the deception. But lying to the world, and the fact that a man is getting credit for her work, slowly eats away at her.

Tim Burton, who is usually seen twisting reality into new shapes, re-teams with screenwriters Scott Alexander and Larry Karaszewski, who wrote Ed Wood, the 1993 biopic of the "worst director in history" that many consider to be the filmmaker's best work. Like all of Burton's work, Big Eyes is meticulously designed, but here it is in the service of transporting the viewer into the mind of a real person in the real 1950s. The colors are vibrant, reflecting the inner worlds of the people who inhabit the lovingly crafted mid-century modern houses. Adams, who was fantastic in last year's American Hustle, inhabits Margaret fully. You can see it in her eyes when she agrees to go along with something she knows isn't right, but she knows the other choices look even worse. And besides, who could turn down Waltz at his coolly convincing best? Late in the story, when the situation has deteriorated into a courtroom drama, Burton, who usually at this point in his movies would be throwing all manner of absurdities up on the screen, instead channels the restraint of Douglas Sirk and lets the absurdity of the situation play out between the two great actors.

Big Eyes works because it gets the fundamentals of acting, directing, and screenwriting right. As in music, individual genius is great, but there's just no substitute for a band with good chemistry.