Looking outside — and within — during trying times.

I've walked nearly 300 miles over the course of quarantine. I've explored practically every accessible nook and cranny of my neighborhood several times over. I've come to know the jagged stretches of sidewalk, what houses have the best front-yard gardens, and what hours to expect the old dog Beau to be on backyard watch, dutifully canvassing the edges of his chain-link fence, limping over to say hi when folks pass. I don't know his owner's name, but I greet Beau and his sister Lucy (according to their name tags) several times a week.

I now have favorite trees — the ones that tower triumphantly, anchored with massive trunks, whose roots and branches know the history of Normal Station better than any of its current residents. I have favorite houses — the ones with bungalow roofs and big front porches with swings. I miss my coffee shop, Avenue Coffee, which closed early on during the COVID crisis; grabbing a pick-me-up there at the start of a journey was a pleasant routine.

I've lived in this neighborhood more than a decade, so taking a stroll here wasn't a new thing. But during quarantine, the walks morphed into something more than just a stretch of the legs or a break from the laptop during work-from-home hours. More than just a time to soak up some much-needed vitamin D or clear the head. They have served all those purposes, but now I've really seen my neighborhood and gotten to know it more intimately. I stop to photograph little bursts of beauty: a particularly wondrous flower, a patch of moss, an interesting cluster of mushrooms growing on a stump. 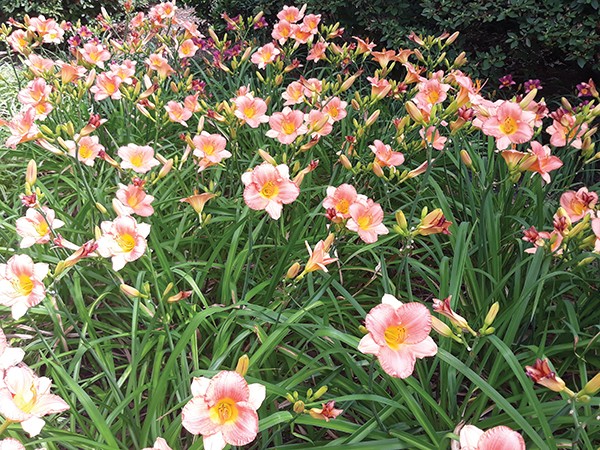 I stand in awe when the sun's shooting through limbs and leaves, casting shadows that dance erratically across the sidewalk. If I venture toward the University of Memphis, I pause when a train comes through at Southern, letting the blaring horn beat against my eardrums as it announces its arrival, followed by the clacking of its wheels on the tracks, and then the whir that, within moments, drifts into near silence as it passes. Big, loud, quiet, calm.

Trains aside, I think a lot of us have felt the big and loud parts of the past few months. From the panic and fear surrounding coronavirus to the protests that hit our streets following senseless killings at the hands of law enforcement — we've been flooded with overwhelming information, immense emotions, a desire to do something, to speak out, while simultaneously perhaps feeling helpless. What do you do when you feel helpless and overwhelmed?

I often admire my dogs as they lounge in the backyard, lying in a sunspot, gazing off into the distance or ears perked at the buzz of a bee or the sight of a squirrel. They're so perfectly in the moment at times — just being. I envy that.

But I've found a new sense of being on my many walks — a deep gratitude for the people and creatures that inhabit our space, a better connection to my own thoughts and feelings. A long walk tends to help a person sort through what's going on in their mind and heart — in some ways, to cope. At least that's the case with me.

Have you ever stopped to watch branches sway in a warm breeze? Or followed the clouds as they move across the sky when a storm's approaching? Or honed in on the shadow of your dog, tongue out, as you lead it (or it leads you) on an afternoon adventure? Have you followed the calls of birds to the source, to find a nest of squawking hungry babies poking their tiny beaks out in search of a bug or worm? I hadn't paid too much attention to those types of things before. Not in the way that I do now.

Pre-quarantine, my camera roll was filled with random outings, concerts, gatherings of friends — and I miss that so much. I do. But scrolling through my photos since mid-March, I've seen so much beauty, really seen it, because I was made to slow down, to — as cliché as it is — stop and smell the roses. Even amid a worldwide pandemic, even with horrific injustices happening all too often, there's a flower in bloom somewhere, a bird perched on a limb, just outside your doors. For even a brief moment, something as simple as that can bring you a small measure of inner peace, if you'll let it.

Shara Clark is managing editor of the Flyer.