The Memphis Police Department (MPD) is on course to get bigger — and "reimagined."

Crime and police have been central to conversations around Memphis City Hall since late July. That's when consultants dropped a report to the Memphis City Council that said we need more cops. MPD now has about 2,089 officers. Criminal justice consultants Richard Janikowski and Phyllis Betts from Strategic City Solutions said the city needs 2,800.

Before the size debate began, Memphis Mayor Jim Strickland was having community-wide conversations about reforming the police department. These came in the wake of Black Lives Matter protests calling for change in Memphis and across the country. 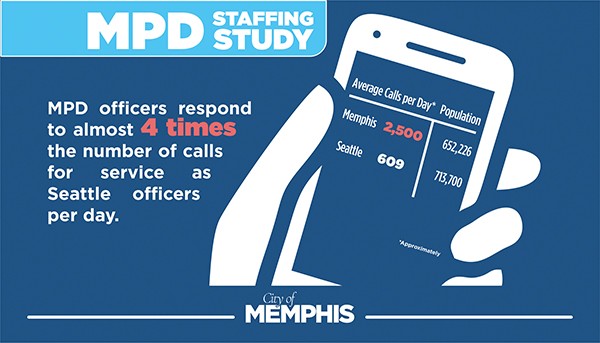 Last week, Strickland formalized those conversations with a strategic initiative to "Reimagine Policing." He formed an advisory council to carry the initiative through its processes. That council includes church leaders like Apostle Bill Adkins from Greater Imani Cathedral of Faith, civil rights leaders like Tonja Sesley-Baymon of the Memphis Urban League, legislators like Sen. Raumesh Akbari, and law enforcement officials like Rosalind Harris with the Shelby County Sheriff's Office.

"Over the next 45 days, this group will be meeting with members of the community to bring forth their initial and immediate actionable solutions," reads a statement from Strickland. "Once they bring those initial recommendations, the group will reconvene and continue working with members of the community for an additional 45 days to make final recommendations and present them to the administration."

A website for the initiative, called Reimagine Policing in Memphis, is live. There, citizens can message leaders about changes they want to see in their communities. And they promise they're listening.

"Trust between law enforcement and the people they protect and serve is essential in our city," reads the site. "It is key to the stability of our communities, and the safe and effective delivery of police services. We want to listen and do the work to improve our Memphis Police Department."

Leaders wanted to grow MPD to 2,300 by 2020. They didn't make it. The new goal of 2,800 will be extremely, extremely difficult, according to council member Worth Morgan, the sponsor of the proposal to increase the MPD complement. He said the consultant study showed more cops will mean less crime.

But council member Michalyn Easter-Thomas wasn't convinced. She said data could be manipulated to prove any point. If the council was putting numbers to things, Easter-Thomas suggested setting similar goals to poverty, homelessness, and blight around schools.

So, does it work? Pounds of academic literature says it does. But further reviews, like the one from The Washington Post in June, say more spending on police hasn't necessarily moved the needle in the last 60 years.