I peddled the three-speed B-Cycle, a prototype made available at a demo hosted last Wednesday by Explore Bike Share, through Overton Square's bike lane. Then, I hit Cooper Street, and, oh my god, cars everywhere. I'll die here, I thought, and turned on a side street. After mustering some gusto, I looped back around to the temporary station where project manager Sara Studdard told me, yes, it's intimidating to ride a bike down city streets for the first time — but it gets easier.

My experience may be typical for a first-timer, but if all goes as planned, Explore Bike Share's planned bike-sharing program will help newbies like me become more comfortable cycling on the streets.

"A big part of Explore Bike Share's programming will be bike education and bike safety," says Studdard, who's ridden for two years. "Not just how you ride a bike-share bike, but how you ride a bike in general. We'll go over the rules of the road, and we'll host group rides to encourage folks to feel more comfortable riding on the street." 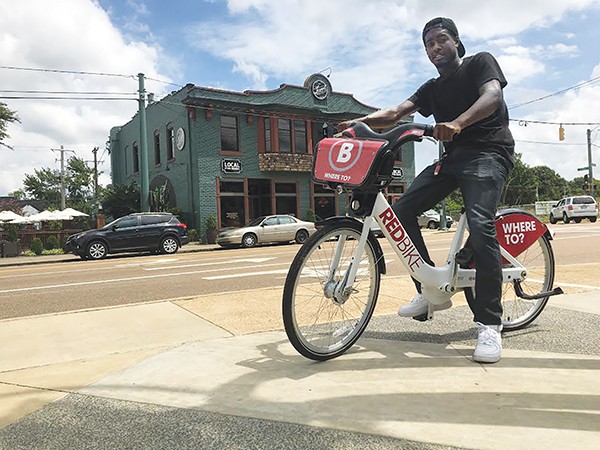 Bicycling magazine ranked Memphis one of the three worst cities for cycling just six years ago. The city is now on its way to housing 600 bike-share cycles and 60 stations in South Memphis, Orange Mound, Binghampton, Midtown, and downtown.

Here's how it would work: Bikes would be rented for a certain amount of time, but users can replace the bike at any station around town. Those who expect to use the program regularly can buy memberships for $15 a month, but bikes can also be rented by the day. Riders will be able to pay with card or cash — making it one of the few bike-share programs in the country with that option. There's also an annual "pay it forward" membership for $200 for those who'd like to donate a membership to a Memphian in need.

Doug Carpenter & Associates, LLC, has assisted with fund-raising for the program for nearly two years. Explore has raised half of the $4 million the bike share needs for initial start-up capital. B-Cycle, operated by Wisconsin's Trek Bicycle, will then build the bikes and solar-powered stations. The bikes will fit a person from about 5'1" tall to 6'6", says Jake Higgin, a B-Cycle associate. Each bicycle will have a projection headlight and LED taillight as well as a front caddy to hold belongings.

A bike-share program will aid many transportation obstacles citizens face in the inner city, says Dwayne Jones, a resident of Orange Mound who sits on Explore's board of directors. Johnson, who's biked for six years, said access is the largest barrier to riding for many residents.

"A lot of people in inner city — predominately black people — ride bikes," Jones says. "The bike-share sparked my interest because we needed more transportation opportunities in the city. We wanted to be connected to what's going on in Memphis.