Chicken S#!+ Bingo and more brought to us by Dale Watson.

I've been excited for World Famous Hernando's Hide-A-Way to reopen ever since I read the news that Dale Watson, honky-tonk hero and purveyor of Ameripolitan music, was not only setting up residence in Memphis, but purchasing the club that sits just blocks from Graceland.

The building has been standing since the early 1900s but has been shuttered with its secrets for well over a decade. Beautifully restored to its former glory, it sits at 3210 Hernando, just off Brooks, taunting us Memphians to darken its saloon doors once again.

Are you familiar with Watson? If not, it's time to acquaint yourself with the man who moved out of Austin because it got too full of dickbags, tech dudes, and Californians selling tacos out of trucks (my words, not his). Memphians will delight in his epic shunning of Nashville as a potential new hometown. Don't believe me? Check the lyrics of his song "Nashville Rash" to read the series of sick burns yourself, issued from one of country's last strongholds to the pop-country artists who now infest Music City. 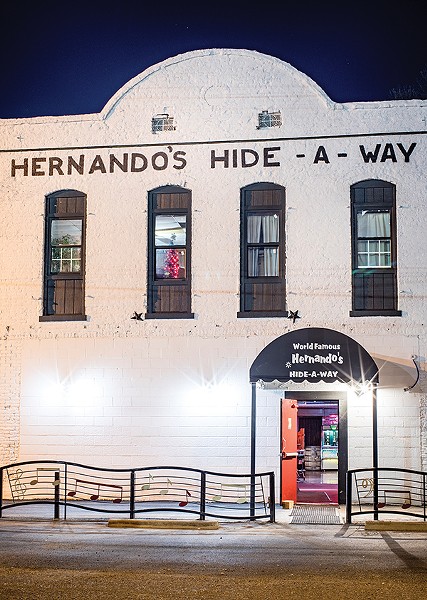 And while I could talk Dale Watson all day, I'm here to talk about drinkin' and dancin'. Hernando's Hide-A-Way is what a lot of bars wish they were and only a small handful pull off. It's dark as hell, save for lights behind the bar and up on stage. There are no windows on the first floor. There's a dance floor laid out in front of the stage, a welcome sight for those who are into the Hide-A-Way brand of Western swing and outlaw country. Each Sunday night, Watson or one of his friends hosts Chicken Shit Bingo (it's listed as Chicken S#!+ Bingo on the website, but this is the Flyer, not a church program).

It's the same question each time: "What the hell is Chicken Shit Bingo?" Pal, here's the deal. You head to the bar any Sunday from 3 to 7 p.m., order some drinks, and take in a crazy-good rockabilly band. Buy a couple of numbered tickets and hang until one of the Hide-A-Way's two chickens is brought into the bar, where we wait for it to shit on a numbered mat. Did she christen your ticket's number? Congrats, you're a winner.

On the Sundays that Watson himself hosts bingo, winners are invited to the stage to play "Let's Make a Dale," where the winner can either keep the winnings or give them up for whatever amount of cash might be in one of Watson's pockets. The good news? It could be more than the bingo earnings. The bad news? It could be some loose change and your total humiliation onstage in front of your friends.

But bingo, while the most outside-of-the-box reason to visit the bar, is just one in the Hide-A-Way's bag of tricks. Each week, they host Honky-Tonk Wednesdays, typically with Watson and his band. Monthly, they feature Goner Records Night. Monday through Friday, happy hour lasts from 4 to 7 p.m. with burger and drink specials. When Watson isn't touring, he's there himself, even occasionally living in the upstairs part of the bar when his nearby Airbnb is rented out.

The menu is mostly burgers, hot dogs, and chicken sandwiches, and while I haven't tried much of it, my friend declared the burger "phenomenal!" There's also a menu item called My Girlfriend Isn't Hungry, featuring a couple of wings and some fries. On bingo nights, plain hot dogs are complimentary.

The Hide-A-Way has a full bar, which I have explored at length from ordering wine to whiskey to beer. There are a handful of special cocktails, and everything is reasonably priced. As always, I report on the frontline of Jameson procurement, and here it is only $5.

Watson's World Famous Hernando's Hide-A-Way has a packed schedule in the coming weeks. Watson is hosting a kickoff party for his Ameripolitan Awards on February 21st, and the next night he'll be onstage with special guests to host what I imagine will be a very raucous Chicken Shit Bingo. Let's make a Dale: I'll be there if you are.