Brooks Museum Chief Curator Marina Pacini wants to talk about a lesser-known photograph by Civil Rights photographer Ernest C. Withers, but she's constantly drawn back to the famous image of striking sanitation workers with signs reading, "I Am a Man."

"They look like a wall," she says, impressed by Withers' uncanny ability to stand shoulder to shoulder amid so many other photojournalists shooting the same image, and to take the definitive shot. "They seem impenetrable," she says. 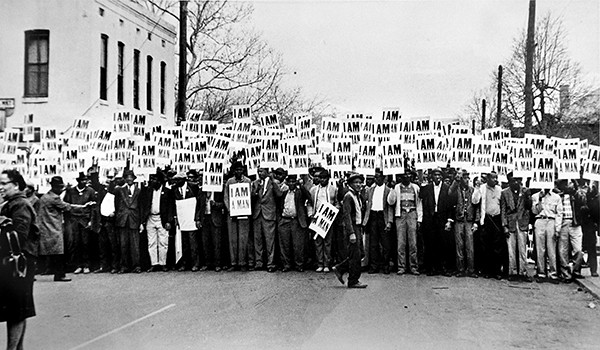 The Brooks Museum acquired all the photos from the Withers retrospective "Pictures Tell the Story," and a number of additional shots after acquiring images from The Memphis World, an African-American newspaper published from 1931-1973. With more that 150 Withers photos in its permanent collection, the museum is now committed to developing a series of exhibits looking at the full range of Withers' work which documented Memphis music, the Negro Baseball League, and everyday life in Memphis' African-American community during the mid-20th century. But the first of these exhibits, coordinated to coincide with MLK50, is titled "Black Resistance: Ernest C. Withers and the Civil Rights Movement" and focuses on Withers' most iconic pictures, all of which were snapped over a period of three months in 1968.

"We selected a few pre-1968 images," Pacini says. "One of the photographs is from March 1960. It's the arraignment of the sit-in demonstrators arrested at Memphis Public Library. It was part of the LeMoyne and Owen college students protesting not just at library but also at the Brooks Museum and various downtown businesses. At the end of year, that protest led to the integration of both the Brooks Museum and Memphis Zoo.