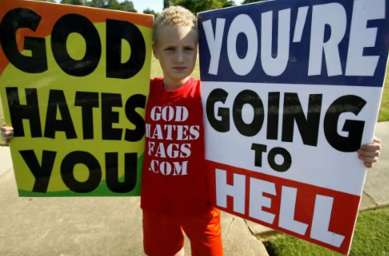 Members of the Westboro Baptist Church, best known for their "God Hates Fags" protests and picketing at the funeral services of soldiers, are planning to demonstrate in front of Graceland on Friday, May 17th at 4:45 p.m.

According to their website, Westboro members view Elvis Prelsey as a false idol and a drug addict. Here's their bizarre explanation:

God hates your Idols, so Westboro Baptist Church will picket one of the many major idols of Doomed USA, to wit: Graceland. Former home of Elvis Presley. ALL the evidence suggests that his present home is HELL.

Ask the Question: How did Elvis die? The Internet gives this: Elvis died on August 16, 1977 in the bathroom at Graceland. After being found on the bathroom floor, Elvis was rushed to the hospital where he was officially pronounced dead.

The coroner recorded the cause of death as cardiac arrhythmia. While true in the strictest sense (cardiac arrhythmia means that the heart was beating irregularly), the attending physicians deliberately omitted the fact that what had apparently caused Elvis' heart to beat irregularly and then stop was an overdose of prescription drugs. These drugs included codeine, Valium, morphine, and Demerol, to name a few.

Some people believe that Elvis Presley is still alive. It is an interesting idea to explore. (WHAT?! You people need something to do with your time!!)

Assuming you do believe that Elvis died, you can visit his grave at Graceland. (YES, gotta worship the rotting carcass of that lecherous, adulterous, pervert and drug addict!) I did NOT ask the Question: What happened in the Jungle Room! My stomach is only so strong.

Oh, and of course they have to work homophobia in somehow. After a listing a few Bible verses, this little nugget is thrown in at the end of the post:

For ALL this, God has cursed you with Same Sex Marriage, a thing that will be your final undoing! Praise God!