Last year, when Crosstown Arts hosted a unique collaboration between Blueshift Ensemble, a group of classically trained Memphis musicians, and ICEBERG, a collective of composers based in New York City, ICEBERG's founder, Alex Burtzos, discovered something about Memphis concerts that is hard to come by in the Big Apple.

"It's a completely different type of audience than in New York," he notes. "And better, in most ways. If you produce a New Music concert in New York, half the audience members will be composers. You struggle to fill the hall and then it's half composers. And in Memphis, we were blown away, because at both concerts we had over 100 people, and they were just members of the public who were curious and wanted to learn more. After the concert, they weren't afraid to come up and engage with us and ask questions. 'What was it that you were doing with the cello there, that made that sound?' Questions like that. And that's exactly what we want. We want to engage with listeners. We want to make people curious."

That last comment could be a rallying cry for a genre that's coming to be called "New Music." Arising out of the milieu of conservatory-trained performers and composers, New Music's embrace of eclecticism would seem to be a good match for the melting pot of styles that has always defined Memphis music.

Jenny Davis, artistic director and flautist for Blueshift, reflects on this from a Memphis native's point of view. "People are just open to hearing new things," she observes. "People tend to be curious in Memphis. So having Blueshift is really exciting. We can program things that haven't been done much, or ever, here in Memphis."

Curious listeners will be in luck next week, when Crosstown Arts once again sponsors a brief residency for ICEBERG composers, with a concert and two composers' discussions. The beauty of New Music for the inquisitive fan is that it serves the curiosities of many kinds of listeners. As Burtzos says, "What's happening in music right now, and what ICEBERG is striving to embrace, is a greater democratization of style. There is no dogma anymore. The wide variety of media has enabled us as listeners to pick and choose, regardless of school or style.

And, as Burtzos notes, Blueshift is a perfect fit. "What I really love about Blueshift, as an ensemble, is not just that they play at a high level, but that they do collaborations with so many different people. They are capable of playing mid-century modern music, but they also can jam with an MC. They have a passion for both styles and everything in between. So they are the perfect interpretive force for our creative force."

ICEBERG, being a loose affiliation of composers rather than a performing ensemble, relies on such versatile groups as Blueshift to realize their work — groups that are hard to find outside of New York. "The idea of engaging and collaborating with ensembles, that's our normal mode of operation. So in our first two seasons, we partnered with four different New York ensembles. But this work in Memphis is unique. We don't do residencies like this anywhere else." 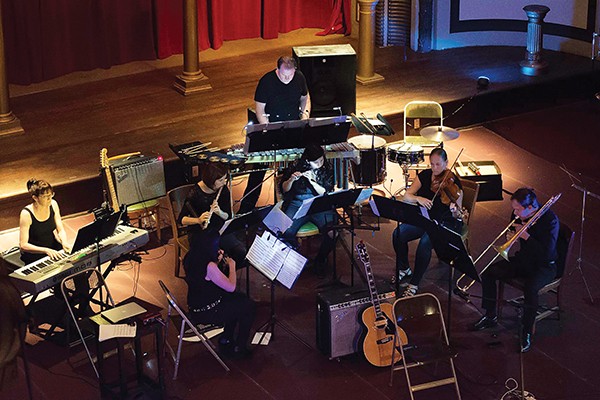 As Davis notes, the unpredictable nature of the collaboration can be salutary for Blueshift. "Each of the composers is different," she says. "Like Jonathan Russ — his music is very influenced by indie rock. For Drake Andersen, we play a piece of his using graphic notation. It's challenging but also very rewarding for us to tackle so many different styles."

Having met Russ and Burtzos at a contemporary music festival in 2014, they were naturally a point of reference when Davis helped found Blueshift. "Jonathan wrote a piece for us, and he told Alex, 'Hey, there's something special going on in Memphis. We should see what ICEBERG can do there.' And Crosstown Arts ended up hosting these concerts and letting us use their spaces. So we can't thank them enough."

Beyond the performances, ICEBERG composers will be hosting discussions with the public on the following Saturday. While Cooper will offer an approach to appreciating contemporary music in general, Burtzos will share his insights into a Radiohead track, "Pyramid Song," that is informed by music theory of the Middle Ages. These won't be typical lectures: Dialogue is encouraged, and judging from last year, that's what they'll get from Memphis. As Davis reflects, this city's fascination with new and unusual music is not going anywhere. "It's really worked out so well. I'm excited to see what can become of this collaboration in future years, too."