Bogus Ballot Battle on Hold; Candidates Line Up for 2020

So what's the status of the "bogus ballot" question, which was due to be given a post-election judicial hearing last week?

"On hold" is the answer. Several factors have intervened to postpone a final reckoning about the legality of sample ballots circulated at election time by entrepreneurs on behalf of candidates willing to pay potentially thousands of dollars to have themselves "endorsed" by shell organizations.

One factor was a heart attack suffered by retired Circuit Court Judge William B. Acree of Jackson, who was imported before the election to rule on the propriety of "pay-for-play" ballots circulated by organizations calling themselves the "Greater Memphis Democratic Club" and the "Shelby County Democratic Club," respectively.

The former is operated by Greg Grant, the latter by M. Latroy Alexandria-Williams. Neither organization has an actual connection to any official organ of the Democratic party, and both "endorsed" candidates with demonstrable Republican connections in sample ballots mailed and handed out to prospective voters.

Lawyer John Marek, a candidate for Memphis City Council in the recent city election, the Shelby County Democratic Party, and the Young Democrats of Shelby County all joined on a request for an injunction against circulation of the ballots. Acree wound up hearing the case when all local judges, most of whom had previously patronized such ballots, recused themselves.

With three hours to go before the polls closed on election day, October 3rd, the judge issued a temporary restraining order against further circulation of the ballots and scheduled a follow-up hearing for last Wednesday, November 13th, to consider a permanent ruling on the matter.

Judge Acree's heart attack was not the only event to intervene against that schedule. Defendant Alexandria-Williams, as was his right, filed a notice of removal of the case from state to federal jurisdiction. For his part, Grant has of yet not made a decision to join in the notice of removal. The case now rests in the hands of U.S. District Judge Sheryl Lipman, who has not yet ruled on whether she intends to keep the case or remand it back to state court.

Nor have the attorneys for the plaintiffs — Bruce Kramer, Jake Brown, and Melody Dernocoeur at Apperson Crump — decided on whether to seek the remand themselves. A goal of the attorneys, incidentally, in whatever is the final court of record, is a ruling of "unjust enrichment," whereby the ballot entrepreneurs would be required to forfeit the profits they made from the sale of their endorsements.

• The 2019 Memphis city election may have come to a finish with the conclusion of last Thursday's runoff elections for two city council positions in District 1 and District 7, won by Rhonda Logan and Michalyn Easter-Thomas, respectively.

But 2020, which will be chock-full of elections, is just two flips of the calendar away, and one of the races sure to draw much attention will be that for the position of General Sessions Court clerk, which will be vacated by current longtime clerk Ed Stanton Jr. (father of former U.S. Attorney Ed Stanton III).

Three of the known contenders for the clerkship are, like Stanton, Democrats and well known to followers of local politics. The first name in the hat was that of Shelby County Commissioner Eddie Jones, who filed two weeks ago. At about the same time, Commissioner Reginald Milton began informing people of his interest in the race.

The two commissioners were just joined on the ballot by former longtime state Senator John Ford, who filed for the race on Monday. Yes, that John Ford, the controversial member of the Ford political clan who ran afoul of the FBI's Tennessee Waltz sting in 2005, was convicted of bribery, and served a term in state prison.

Ford formerly served a term as General Sessions clerk, simultaneous with holding his Senate seat. Having long since regained his citizenship rights, Ford aims to re-establish himself as a public official. Despite his notoriety, he was regarded as someone with an in-depth knowledge of the ins and outs of state government and as a go-to legislator for mental health and various other public issues.

Milton, a community organizer and chairman of the commission's community grants committee, which he brought into being, was a veteran of several political races before his 2014 election to the commission and his 2018 re-election. He greeted the news of Ford's filing by saying, "I've never run an easy race. I'm used to it."

Confiding that he would make a formal announcement next week, Milton said, "I appreciate those willing to offer themselves for public office, and I look forward to sharing with the public why I feel I would be best suited for this position."

• As was noted in this space recently, state Representative Jim Coley (R-District 97) has decided to retire and won't seek re-election in 2020. So far, two Democrats have made known their interest in seeking the seat — Allan Creasy, who got 45 percent of the vote in District 97 in a race against Coley last year, and Gabby Salinas, who gave Republican State Senator Brian Kelsey a close race in his 2018 re-election bid.

Republicans will try to hold on to the seat, of course, and there is an active GOP candidate in the field — John Gillespie, who works as a grant coordinator at Trezevant Episcopal Home and is making his first try for political office. Gillespie issued a press release this week claiming receipts of $47,000 at a recent East Memphis fund-raiser — not a bad first-time haul. 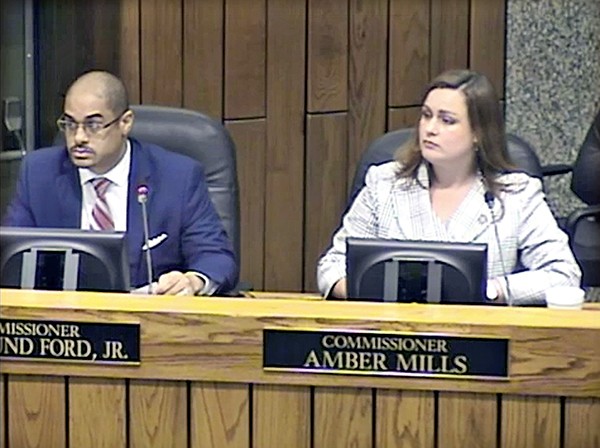