You know what the music business is like. It's champagne, cocaine, and sex on tap. It's flashes of brilliance delivered by bolts from heaven into the mind of the tortured genius. It's a stadium full of fans screaming adulations. It's rock-and-roll all night and a party every day.

But then there's the other music business. It's writing five bad songs for every halfway listenable one. It's practicing for weeks, and no one shows up to your big gig. It's haggling with sharks over mechanical rights, publishing rights, masters, and synch. It smells like stale cigarettes and pee. 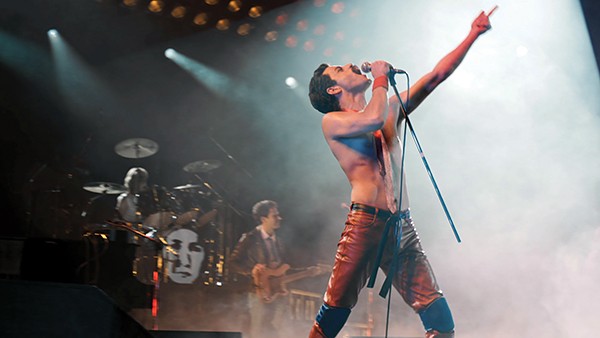 From the opening notes of the 20th Century Fox fanfare played in Brian May's straight razor guitar tone to the band's closing bow on the Wembley stage, Bohemian Rhapsody, the much anticipated biopic of '70s stadium sovereigns Queen, lives in the former, idealized version of music.

When we first meet Freddie Mercury (Rami Malek), his name is Farrokh Bulsara, and he's working as a baggage handler at London's Heathrow Airport and studying design at Easling College. His favorite band is Smile, which is the project of Farrokh's classmates Brian May (Gwilym Lee) and Roger Taylor (Ben Hardy). After one college gig, Smile's lead singer quits. Brian and Roger are sitting around in the van, wondering what to do, when Farrokh introduces himself as Freddie and rips off a few bars of one of their songs. Then they're off and running.

Music biopics are among the hardest genre of film to get right. It's not that there's any dearth of great material. Musicians like Johnny Cash, James Brown, and Selena were genuinely fascinating people who had incredible adventures and touched the lives of billions. But the life of a musician isn't as cinematically interesting as, say, an athlete or a war hero. The athlete's got the big game, where the outcome is uncertain, to build tension. War heroes have battles, which are pretty much the bread and butter of the modern blockbuster. Musicians' successes and failures are more internal. Creating a song like "Bohemian Rhapsody" looks like a bunch of hippies arguing about harmonies. Only Craig Brewer in Hustle and Flow has ever been able to make the studio experience look as fun as at feels. 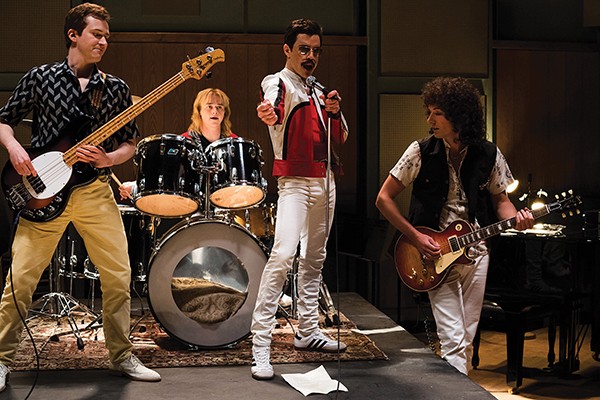 Queen seems like the perfect candidate for a great music biopic. They were, as Mercury says, a bunch of misfits playing for the misfits in the back of the room. May designed and built his own guitars. Today, he researches interplanetary dust clouds. Mercury was a Farsi refugee from Zanzibar who settled in England when he was a teenager. His family were conservative Zoroastrians living in decadent '70s London, and, for the first 30 or so years of his life, Mercury was a closeted gay man in a homophobic industry.

Those old attitudes cling to Bohemian Rhapsody like the stench of stale cigarettes on last night's gig jeans. This is not a warts-and-all story like Walk the Line, the gold standard of 21st-century music movies. This is record label-approved hagiography, and those doing the approving seem to see Mercury's sexual orientation as a character flaw he must overcome. The relationship between Mercury and his '70s fiancée Mary Austin (Lucy Boynton) takes up a lot of time, but never gels. When Mercury is finally accepted by his family, it feels forced and perfunctory.

The Big Game scene in music biopics is the Big Gig, and Bohemian Rhapsody uses Queen's legendary performance at the 1985 all-star famine benefit show Live Aid as a framing device. That sequence, rendered in CGI (you didn't think they were going to pay for 150,000 extras, did you?) finally delivers on the promise of the premise. Malek is completely committed to the role of Freddie Mercury, and on stage, unburdened by the clunky script, his performance really shines. There should be a lot more of that. Queen's climb to the top of the list as one of the best live acts in the world is represented by the old "names of cities flash by the screen" trope that was a cliche in the 1930s.

Queen represented the slick, commercial side of rock in the 1970s, so maybe it's appropriate that the film about their career is heavy on flash and light on substance. But Malek's virtuoso performance belongs in a better movie.