“Bouguereau & America” at the Brooks

Bougie or tasteful? You be the judge.

Traveling exhibitions that visit the Brooks Museum of Art typically bring works of great artists or celebrate a significant period or movement in art history. Greatness is expected.

But then there's "Bouguereau & America," co-organized by the Milwaukee Art Museum, opening Saturday and bringing with it some notoriety. The works by William-Adolphe Bouguereau (1825-1905) are remarkable — and critics have done their remarking by hammering the artist's works despite the fact that he's technically gifted and was the best-selling artist in America's Gilded Age. His works made him a millionaire in the 19th century, which was extraordinary for someone who wasn't a robber baron. 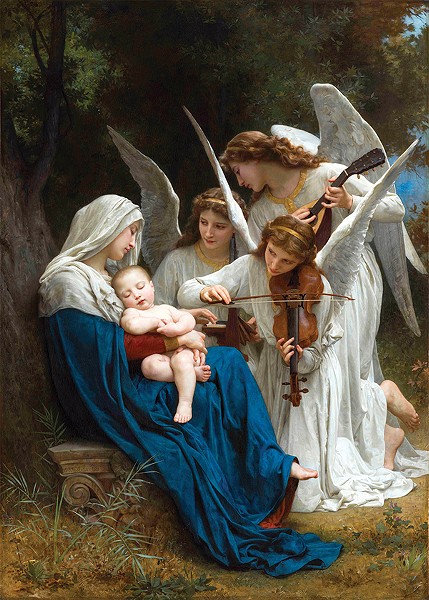 So why is the Brooks doing this, and why should you see it? Because the French artist had chops and is something of an American phenomenon.

And it is that question of taste, Garrett says, that is at the center of how we regard the exhibition. She is cautious: "I personally would argue that there is no such thing as good or bad taste." The notion does challenge objectivity: Nobody believes that they have bad taste.

Garrett continues: "What you are seeing here is the taste of these particular people who are buying his work. You are getting a glimpse of the identity that they want to project into the world." Some of the buyers of Bouguereau's works had established money, but most were the newly monied, often entrepreneurs.

"They want to borrow a bit of the cultural legacy of Europe," Garrett says. "Because that gives them a sense of history, a sense of legitimacy. And if you have that, it means you have reached a certain level in society and you are here to stay."

Dr. Stanton Thomas is a co-curator of the exhibition. He is Garrett's predecessor at the Brooks and is now at the Museum of Fine Arts in St. Petersburg, Florida. He has written: "Bouguereau delights and confounds us. It's hard not to be seduced by his exquisite technique and the shameless beauty of his modest nymphs, woebegone children, and polished peasants."

How else to describe B's work? Debra Brehmer, a critic for the art blog/magazine Hyperallergic, writes, "His work still refuses to settle into a comfortable category, remaining a gelatinous melange of kitsch, academic virtuosity, and unsavory sensuality."

The depictions are idealized: heroic men, sensuous women, playful cupids. The dreamy portrayals of peasants and beggar children are almost laughable: "These children look absolutely perfect," Garrett says. "They're really clean, they don't have any dirt under their fingernails. It's like a Photoshopped version of reality."

For the discerning viewer, it can be a struggle. "Bouguereau has been accused of being shallow and vacuous, and these are sort of sugary confections, but at the same time just so beautiful," Garrett says. "You cannot help but stand in front of these pictures reveling in their beauty, but afterward, when you've stepped back, you realize you're having some exceptionally complicated feelings."

Unrelated to the artistic merit of the exhibition but relevant to the museum's plans to become Brooks on the Bluff, is the size of the show. "This exhibition has absolutely pushed our current building to the limit of what is possible here," Garrett says. The plan for the new building would take care of such issues, the Brooks promises.

There will be a membership reception for "Bouguereau & America" on Friday, June 21st, and a free community day from 10 a.m. to 1 p.m. on Saturday, June 29th. View the exhibition for free at Orion Free Wednesdays at the Brooks, from 10 a.m. to 8 p.m.