In high school, I remember being tested on my ability to recite the 27 amendments to the U.S. Constitution. Our recitation was basically a two- to six-word summary of each amendment that we memorized from Quizlet flashcards, because who can bother with all the legal jargon, right? I haven't sat down in one of these high school classrooms recently, so I don't know what U.S. history and U.S. government classes look like today. Students might well be using the same flashcards we used back then, writing down those same brief summaries of the amendments.

Considering the nationwide prison strike in protest of prison conditions going on right now, I am thinking here about the Thirteenth Amendment, often summarized as the "abolition of slavery." But those three words don't really tell us the whole story. In fact, they ignore a significant loophole that has allowed for the expansion of prisons and mass incarceration as it provides a growing workforce to pull cheap labor from. 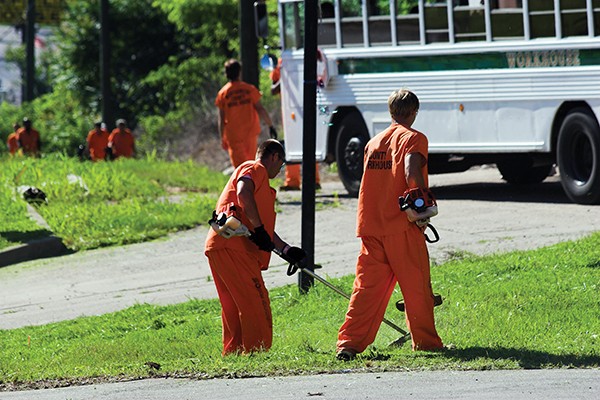 Amendment XIII Section 1 more fully states that slavery and involuntary servitude is unconstitutional "except as a punishment for crime." That is, if you are able-bodied, then you must work. Following the Civil War, this meant that the country that institutionalized the exploitation of indigenous peoples and lands and the enslavement of black bodies now needed another coded way of continuing to do so.

This led to penitentiaries replacing plantations and to the rise of forced-labor programs. The Equal Justice Initiative, a co-collaborator in the design of the National Memorial for Peace and Justice, writes: "As the end of slavery left a void in the Southern labor market, the criminal justice system became one of the primary means of continuing the legalized involuntary servitude of African Americans."

So, the more people who are incarcerated and "punished," the larger the available pool of unpaid workers. At that time, the convict lease system was a way of further controlling black bodies by preventing formerly enslaved folks from establishing themselves as workers with rights.

Today, we see this continued thinking embedded in the maintaining of white supremacy through policy that disproportionately incarcerates black folks. Prior to and well after the Civil War, black people were seen in contradictory ways: as a danger or threat to established systems, that is white supremacy, and yet also as a resource, a source of expendable labor. As Angela Davis wrote in 2003, "Whether this human raw material is used for purposes of labor or for the consumption of commodities provided by a rising number of corporations directly implicated in the prison-industrial complex, it is clear that black bodies are considered dispensable within the 'free world,' but as a source of profit in the prison world."

In federal prisons, prison labor is a requirement, and in multiple states, this work goes unpaid. Prisoner workers in the federal prisons industries program, UNICOR, have earned a minimum of $0.23 per hour and a maximum of $1.15, according to UNICOR's Annual Report in 2001, for making things such as office furniture and clothing and textiles. UNICOR also reported in 2001 a revenue of $583.1 million from prison-made products.

Some may argue that any wage is better than no wage — though, again, Alabama, Arkansas, Florida, Georgia, and Texas don't pay for their prison labor, and don't try to convince anyone that a multi-million-dollar industry isn't able to match state wages for prison workers. For folks who may have limited or no access to financial support from outside of the prison, these wages are all that they have, and if you're only paid a few cents an hour, it would take weeks to buy a phone card or a box of menstrual products.

This is one of many reasons why prisoners are engaged in work stoppages, hunger strikes, and commissary boycotts across the U.S. The recent prison strike is not the first of its kind, as prisoners have organized strikes in the past, but its success is picking up due to the prisoners' strategic media organizing. Beginning on the 47th anniversary of the execution of Black Panther organizer George Jackson, the #August21 prison strike was in part a response to the deaths in the Lee Correctional Institution in South Carolina, this year. Violent conditions are created due to lack of funding for rehabilitation and development programs in prisons, and further, prison guards are active in maintaining if not advancing this violence, as was the case in South Carolina, when prison guards did not intervene for hours, which resulted in seven deaths and multiple hospitalizations.

Given the growing call for civic engagement and political participation, we must demand to know the conditions in prisons across our country. The summaries to the amendments we once recited years ago do not tell the stories of prisoners today. I hope that educators are helping make this language of our laws accessible to students, encouraging them to take a closer look and to draw connections to the relevance and impact of these texts today.

And as for our politicians, their silence and lack of response to these poor prison conditions should be seen as what it is: active participation in preserving injustice. Today, we demonstrate solidarity with prison strikers. Soon we will vote. See you at the polls.

Aylen Mercado is brown, queer, Latinx chingona and Memphian pursuing an Urban Studies and Latin American and Latinx Studies degree at Rhodes College. She is researching Latinx identity in the South.