Power Tel's warehouse loading dock on Broad has doubled as a music stage during Broad Avenue art walks for years. But this spring, its conversion to an amphitheater will be complete, and by fall, the iconic water tower that looms over the stage will see an artistic upgrade as well.

Last year, the Historic Broad Business Association won a $350,000 grant from ArtPlace America for its Water Tower Pavilion project, which is set to open May 10th. That includes the conversion of the loading dock into a shared-space amphitheater that will host music and dance performances at night and on weekends and continue to serve as a loading dock for Power Tel by the weekdays.

That money is also funding the construction of a wide staircase that helps visitors more easily access the stage area, which is 16 feet below the street's grade.

"There's a large observation platform on the stairs, and [artist] Elijah Gold is doing that section out of old bicycle parts to pull in the Hampline," said Historic Broad Business Association vice-president Pat Brown, referencing the two-way bicycle path that will connect Overton Park to the Shelby Farms Greenline via Broad Avenue. Once complete, that path will run past the Water Tower Pavilion. "He's also doing a sculpture at the top of the stairs, also made from old bicycle parts. We are calling it the bike dancer."

Additionally, New York artist Suikang Zhao, who last week won a public contest to redesign the Broad Avenue water tower, will use $65,000 of that grant to install his sculpture on the tower. 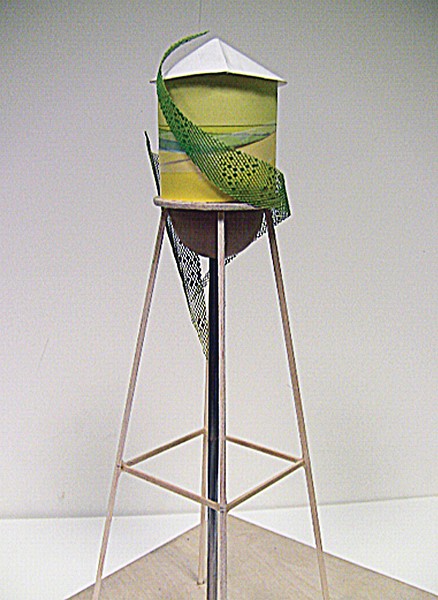 Zhao was one of three finalists in a national call to artists organized by the UrbanArt Commission. He and two others presented their ideas for the tower, which ranged from murals to sculpture, at the annual Crosstown Arts MemFEAST event last week. Participants voted on their favorite design, and Zhao's plan to install LED lighting and a perforated metal ribbon around the tower won the most votes.

Zhao said he wants to involve the Broad Avenue community by asking them to suggest words that he can perforate into the metal. Those words will cast shadows onto the tower. He also wants Memphis artists to help him physically construct the sculpture.

"By the finish, they will be able to say, 'I did that.' I think that is the most important thing. It becomes their work, not just my work," Zhao said.

Brown says she hopes Zhao is done with the water tower installation in time for the fall art walk, but the rest of the depot work will be complete in time for "Dance on Broad," seven consecutive Saturdays of dance performances and dance classes on the pavilion stage, from May 10th through June 28th.

"Every time you come back to Broad, hopefully something new will be unveiled," Brown said.