You have to admire the Aussies for their seeming inability to care what other people think. Case in point: the almost Champagne-ish wine known Down Under as a "sparkling Burgundy." Up here on this side of the planet, we call it a "sparkling shiraz." Whatever its name, the Aussies do take a degree of national pride over the stuff. So tread lightly when poking fun of their wine. Australia is an evolutionary lone wolf with fully weaponized fauna and flora, so you do not want to throw hands with an Aussie.

Americans, living without the specter of killer house plants, have long had the opportunity to not only out-innovate the Old World, but to out-snob it as well. Show me a cosmopolitan American sommelier who will even consider the sparkling shiraz, and I'll show you an unpretentious, open-minded, albeit a soon-to-be unemployed, one. As a result, the dedicated stateside oenophile won't touch it either. 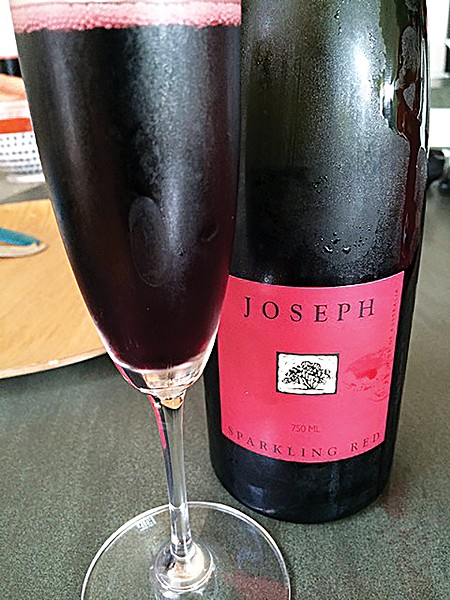 Historically, we have a good reason to be touchy, given our great sparkling red wine shame: Cold Duck. It was a weird, sweet fizz made of an unholy mix of sweet whites and reds and Champagne. It's an old German recipe, but at one point in the 1950s, Cold Duck was the most popular "Champagne" in America. That's on us, and we really should be embarrassed. Still, guilt by association is no way to pick a wine.

Sparkling shiraz is powerful on the fruit, so do yourself a favor and look for a dry one. If you aren't careful, you'll have the sensation of drinking a Jolly Rancher Fanta. Or Cold Duck.

The problem is you won't likely have much of a choice. Being relatively unknown in the states, the selection is slim. You'll likely need to head to one of the bigger liquor stores, where you preferably know someone you trust. For me, that's Buster's, where they only had one on the shelf: the wonderfully named Black Bubbles by Shingleback. It retails for $29.99, and that is about what you'll pay stateside for a sparkling shiraz worth drinking. It's won several awards, but none in the northern hemisphere.

This is Champagne the way it would be rendered on a Jimi Hendrix concert poster: It's a vivid purple with a violet fizz, whirling with an aroma of black currents and cherries. It's a picnic wine — made for pizzas and burgers or a turkey sandwich with a big slice of gouda. It's good, but it's also just different.Even if it doesn't become your go-to, it's worth sharing a bottle with a few of your less-judgmental friends.

If you want to preserve the bubbly fizz, drink it out of a Champagne flute, which will create less surface area through which the gas can dissipate. Don't fret about it though; I've had the right Champagne on the right day out of a juice glass, so whatever works. As for the temperature, certainly in the summer and probably in the spring and fall, you'll want it chilled if not exactly cold, which puts the flavor on mute. In the middle of what we call winter here, room temperature works fine.

The Aussies aren't the only ones in the sparkling red game. Other cultures that never mistook Cold Duck for Champagne make and drink their own without a hint of shame. Rose Regale Sparkling Red comes from the Piedmont region of Italy made from Brachetto grapes. It's a little lighter and sweeter and drifting a little closer into the neighborhood of Prosecco.

It's entirely possible that they embrace their "sparkling Burgundies" Down Under because the rest of us sneer at it. Given the few Aussie's I've met, though, I think they just like what they like. This is a country that could vote itself free of the Queen, but they just can't be bothered, cause, you know, she seems like a nice lady and all. It wouldn't seem cricket, mate.