UPDATED to correct the order of finish in the 2014 Democratic primary for Shelby County Mayor.

The Republican three-way battle royal is an open and settled proposition. It is on the Democratic side that intrigue (in every sense of that word) and potential surprise are major factors behind the scenes.

Sidney Chism, the ex-Teamster leader, former local party chairman, two-time county commission chairman, interim state senator, and political broker nonpareil, has long advertised his availability for the office, but, though Chism continues to preside over a well-attended annual political picnic, it is an open question whether and to what degree the major clout he once enjoyed in Democratic circles has been diminished.

Now employed by Sheriff Bill Oldham, Chism has had to weather criticism from party purists for his past electoral support of Oldham, who ran for office as Republican, and though he was eventually cleared by an ethics panel, had to withstand formal conflict-of-interest charges from then commission colleague Roland for having voted on appropriations measures that contained wraparound benefits for his day-care operation.

Meanwhile, other Democrats continue to ponder the idea of running. Two possibilities are University of Memphis law professors Steve Mulroy and Lee Harris, who have long been supportive of each other's political careers.

A liberal's liberal in the manner of Memphis congressman Steve Cohen, Mulroy served two terms on the county commission and was a candidate for county mayor in the 2014 Democratic primary, finishing third a three-way race involving eventual nominee Deidre Malone and the Rev. Kenneth Whalum Jr. , who finished second despite being out of the country during the latter part of the race).

Until the surprise election of Republican presidential candidate Donald Trump last year drastically altered his prospects, at least for the immediate future, Mulroy's chief ambitions concerned the possibility of an appointment to the federal judiciary. Now Mulroy's options have once again become more expressly political.

Harris has always leaned in the direction of political office. As a political unknown in 2006, Harris was one of the also-rans in the 9th District congressional primary of that year, won eventually by Cohen. By 2011, he had enough name recognition to run for, and narrowly win, a Memphis City Council race against Kemba Ford. 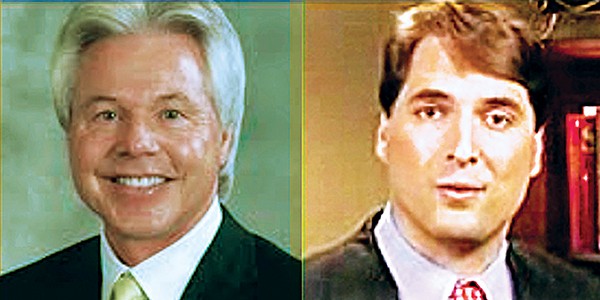 Nor did Harris' ambitions end there. He was active in pursuit of cutting-edge issues and was the chief sponsor of an ordinance prohibiting job discrimination against members of the LGBTQ commmunity. In 2014, he ran in the Democratic primary against another member of the Ford political clan, state Senator Ophelia Ford, and was able to unseat her.

Harris got himself elected leader of the shrunken five-member Democratic corps in the state Senate and made the most of his position, becoming an active spokesman for the party's issues, and meanwhile working across the aisle with Republicans like state Senator Brian Kelsey on nonpartisan matters.

Ever on the move, Harris meditated seriously on another race for Congress against incumbent Cohen but thought better of it, publicly dropping the idea in early 2016. His latest initiative, the Tennessee Voter Project, serves the dual purpose of revving up Democratic energy in general and keeping his name before the public.

And now opportunity beckons once more with the county mayor's race. It seems almost inevitable that either he or Mulroy, still functioning as a mutually supportive duo, will make the race, and that coin flip will likely happen fairly soon.

Nor does the guessing game end there. The latest rumors in Democratic Party circles concern the possible mayoral candidacies of two other big names — Harold Byrd and Shea Flinn.

A core member of the politically active Byrd family, Byrd is president of the Bank of Bartlett, essentially a family enterprise. A longtime state Representative and a political broker in his own right, Byrd was the Democratic nominee for Congress in the 7th District in 1994, losing that year to Republican Ed Bryant.

He prepared a race for county mayor in 2002 but reluctantly withdrew when then Public Defender A C Wharton became a candidate for the nomination, transforming that year's Democratic primary into a three-way affair that also included then state Representative Carol Chumney.

By 2010, Byrd's reputation and popularity, both in Democratic circles and across the party line, were such as to make him an odds-on favorite to be elected county mayor that year. Pointedly, Mark Luttrell, the ultimate winner as a Republican nominee, had let it be known that he would eschew the mayoral race and seek reelection as sheriff if Byrd ran for mayor. But a combination of a personal illness and a post-recession duty to see to the needs of the family banking business kept Byrd from running that year.

Now, the word is that Byrd, with both his own and the bank's health in seemingly good order, is looking at one last chance at gaining the office.

Then there is the chance of a candidacy for the office by Shea Flinn, yet another former political figure with a high profile, both in Democratic Party ranks and in bipartisan circles. A prominent member of the city council after his election in 2007, Flinn resigned his seat in 2015 to become senior vice president for the Greater Memphis Area Chamber of Commerce.

That Flinn was considering a re-entry into political ranks was first signaled recently when his name was prominently featured in a telephone robo-poll of potential candidates for county mayor. That was amid rampant speculation that Flinn had a hand in the sponsorship of the poll.

If Flinn should become a candidate he is sure to have the full support of his father, wealthy radiologist/broadcast executive George Flinn, whose resources are such as to have paid for numerous political races by the senior Flinn himself, a one-time member of the County Commission but a so-far unsuccessful aspirant for a variety of other offices.

That George Flinn is a conservative Republican and Shea Flinn is known as a progressive Democrat is an anomaly of the James Carville-Mary Matalin sort that troubles neither father nor son.