July 01, 2020
8 comments
On the surface of things, Nashville physician Manny Sethi, GOP primary candidate for the U.S. Senate seat that incumbent Republican Lamar Alexander is vacating this year, would seem to have a long row to hoe.

Sethi, an orthopedic trauma surgeon and the son of Indian immigrants, is matched in his party’s primary against a candidate, former ambassador and state cabinet officer Bill Hagerty, who not only carries the endorsement of President Donald Trump, he was hand-picked by Trump to run for the office before he’d even announced.

Nevertheless, Sethi (a self-professed conservative, like all Republican hopefuls these days) is running hard and, in what had become a pandemic-quietened political environment, has resumed making himself visible to voters. He has begun running television ads, and last week he was on a tear — making house calls, as it were — from the state’s far eastern corner to Shelby County.

He arrived at 7:30 Saturday night at his newly opened headquarters in Cordova, to be greeted by a sizable crowd, many of whose members were wearing face masks. For those who weren’t, Sethi had a generous number of his own masks to pass out — red ones bearing his name and the office he sought.

He did not wear one himself, however — though, when speaking to the crowd, he kept an approximate version of the recommended six-foot distance. All thoughts of distancing vanished, however, as he worked his way through the crowd, pressing the flesh.

Among those traveling with Sethi was Chris Devaney, who was Governor Bill Lee’s campaign manager during his successful 2018 campaign and had served Lee subsequently as a cabinet officer. Devaney resigned that post to become campaign chairman for Sethi.

Sethi has the support of other well-known Republicans, including former congressman and gubernatorial candidate Zach Wamp of Chattanooga and Kentucky U.S. Senator Rand Paul, a former presidential candidate.

Paul’s endorsement statement struck a note that, implicitly perhaps, sums up Sethi’s campaign approach: “Tennessee deserves a true conservative who supports President Trump, is pro-liberty, and will fight out-of-control federal spending. I believe Dr. Manny is the right choice. Like me, he’s a physician, not another politician. We need more outsiders in Washington, and I’m proud to endorse him. …"

Meanwhile, the race for District 90 of the state House of Representatives is heating up. This is the position held for 26 years as Democrat by incumbent John DeBerry. DeBerry, whose close ties to Republican legislators and support for GOP policies had alienated numerous of his fellow Democrats over the years, was formally dumped from party ranks by a majority vote of the state Democratic committee back in April.

DeBerry’s exclusion occurred late enough to prevent his filing for re-election as a Republican (though he progressed no desire to change his party affiliation in any case), and the favorite in the race seemed to be Torrey Harris, a human resources officer with Shelby County government and the recipient of a good deal of support from the county’s Democratic establishment.

Harris is not alone in the Democratic primary race, however. His two opponents there — Anya Parker and Catrina Smith — are both running hard, aided by mailers, billboards, yard signs, and other campaign paraphernalia. Parker is a salon owner, author, and executive director of Women of Brown. Smith teaches at Southwest Community College and boasts in her advertising an endorsement from TV judge Greg Mathis. 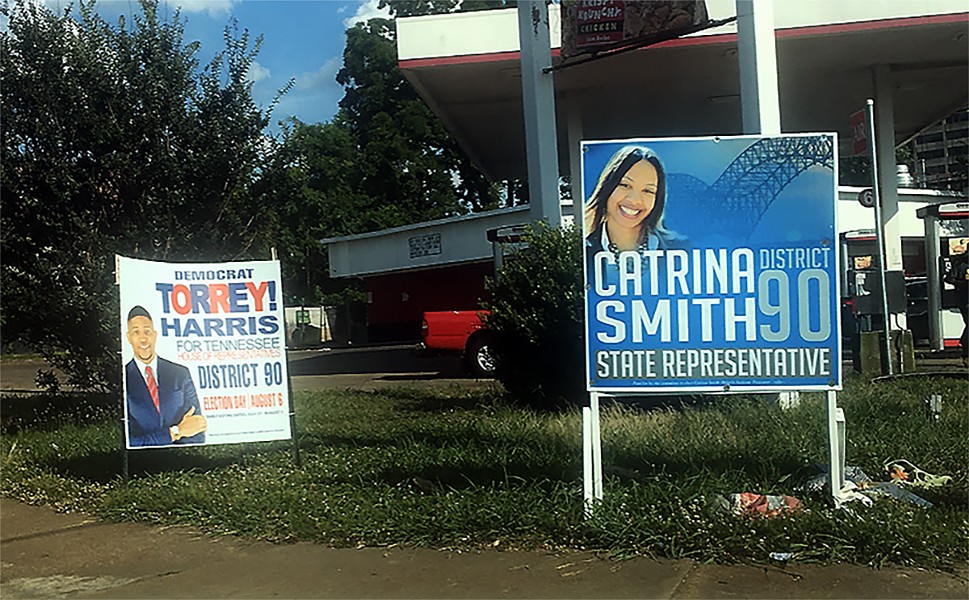 All the candidates bear watching — and none more so than the renascent DeBerry, whose ability to run for re-election was revived by a piece of legislation in the past session of the General Assembly. The measure allows an incumbent denied his party’s imprimatur (read: DeBerry) the opportunity to file as a candidate for the other party if 90 days or more away from a primary or as an independent if 90 days or more away from a general election.

DeBerry qualifies under the latter stipulation and has announced his candidacy for re-election as an independent. Given the name-recognition factor, his bid has to be reckoned as a serious one.