Carb Wars: Why Are Alternative Diets Becoming So Popular?

By now, all us have that low-carb friend. The one who hisses at bread and pasta like a garlic-frightened vampire. The one who asks for bunless burgers at a restaurant. The person who rices (yes, it's a verb here) cauliflower and "spiralizes" zucchinis into something called "zoodles."

If they are, they have plenty of company. While it's impossible to know how many Memphians now follow some form of low-carb diet, surely there are many thousands.

But while you can't quantify it, it is easy to see how these low-carb/clean-eating diets have risen over the last five or so years and have — for the moment — become the dominant diet trend. They are lauded and pushed by celebrities and amplified on social media.

So now Yolanda is eating a steak at lunch. Bryan says pork rinds are considered "health food." And Aunt Dee is making her famous cookies with almond flour.

Before we go any further here, the Flyer is in no way pushing these diets. We're not saying they're good or bad. We're not even suggesting that you try them. Let's go ahead and cover our asses here and remind you that before you change your diet in any way, you should check with your doctor first.

When it comes to low-carb diets, Harvard researchers say there is "some evidence" that they "may" help "some people" lose weight more quickly and keep it off, compared to those on low-fat diets. A dietitian with Britain's National Health Service says "not all carbs are the same" and that it's "the quality and quantity of carbohydrates in our diet that is important." Researchers at the Centers for Disease Control and Prevention say, basically (and correctly), that everyone is different and their diets should be, too.

It's all a bit confusing. To help sort it out, we turned to some Memphians with knowledge of this stuff — a nutritionist, a restaurant owner, cookbook writers, and a clean-eating food blogger. They're working on the front lines of health, wellness, cooking, and eating, and all agree that low-carb diets are the deal right now.

The breakfast rush is over, leaving Bedrock Eats smelling of coffee and bacon. Chef and owner Brandi Marter sits in a side booth in black workout gear, working on a laptop.

Much was made of the paleo-inspired restaurant when it opened in 2015 at the corner of Main and Vance. It was "paleo friendly" — the restaurant's name a subtle nod to the caveman style of eating. Heads were scratched. But Bedrock has thrived as more Memphians seek whole foods and low-carb options.

Marter says her restaurant offers way more than just paleo. It's also gluten-free and caters to people with food allergies (like eggs or nuts), vegans, vegetarians, low-carb, low-fat, "or whatever your thing is at the moment." Sometimes, people will bring Marter lists of their food restrictions, and she works to accommodate them.

She says she was "super-strict paleo" for a long time, but that changed as she began training for endurance sports and Crossfit.

"The longer you try to adhere to a certain set of restrictions, the more you realize life happens," says Marter. "Every human body is different. People get frustrated because they are looking for quick answers. You have to spend time with your body and figure out what works for you, specifically."

Cheryl Malik loves Costco. It was there that she really started to see just how big low-carb diets had become.

She and her husband did Whole30 about four years ago. On that diet, you eat only whole foods for 30 days. It's restrictive and often has adherents scrambling to find approved foods.

"It was so much harder back then to find convenient products to eat that way," says Malik. "Now, it's so easy. They have grain-free tortilla chips at Costco. There's cassava flour at Costco. I used to spend a small fortune on a small bag of almond flour from Kroger. Now, I can get a huge bag for $9 at Costco. I'm a big, big Costco fan over here, apparently."

Malik also loves cooking and says she is "obsessed with health and wellness."

Ten years ago, she focused that love into a blog. The blog — 40 Aprons — now has hundreds of recipes, all elegantly organized by diet — Whole30, paleo, vegan, gluten-free, dairy-free, and low-carb. You can even search by cuisine style: Mexican, Indian, American, and more.

Malik says the most-loved recipe on the site is for her egg roll in a bowl, which fits Whole30, paleo, keto, and low-carb diets. Also look for bell pepper nachos, cookie dough, buffalo chicken dip, and more.

The blog came from a love of writing, Malik says, and of cooking, which she began in college. But the notion of eating clean and doing paleo really began when she was 8. "I knew instinctively that the way we were eating — as a culture — wasn't right," Malik says.

Vegetarian was the only alternative diet with visibility at the time, she says, and she followed it for long time. But when she discovered clean eating, she decided "it made a lot of sense."

She took the dive about a year after she had a baby. Her brain was foggy. She was stressed. And she couldn't seem to lose that last bit of baby weight. She decided Whole30 was "doable."

All of the previous issues melted away (along with the baby fat). Her husband's running pace improved.

"I never looked back," Malik says. "That focus on real food made such an immediate difference for us, physically." 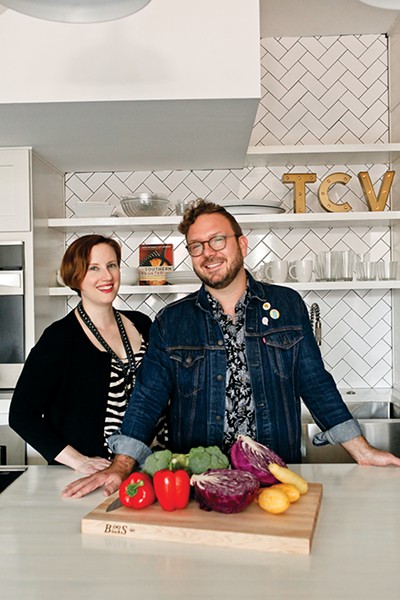 When it came time to name their new cookbook, Justin Fox Burks and Amy Lawrence (scribes of The Chubby Vegetarian blog and cookbooks) did not bury the lede. The Low-Carb Vegetarian Cookbook is due in March, inspired by the surge of low-carb diets.

"The typical vegetarian diet — think beans and rice or sandwiches or even vegan pizza — is fairly high in carbohydrates," Burks and Lawrence say in a statement. "We decided that we need to give our readers an off-ramp when they feel like they need some recipes that don't lean too much on carbs."

But the two didn't crank out a product to fit the times. They did their homework. They consulted dietitians and nutritionists Erin Dragutsky and Kristi Edward from 901 Nutrition and Carolyn Nichols, nutrition education coordinator at Church Health, to "better understand the role carbs play in our bodies."

"The standard American diet is crazy!" they say. "We have been tricked by marketing into believing that foods that are actually pretty terrible for us are 'fun.' Too much sugar and too many carbs can become a real problem."

Meat and seafood are staples of most low-carb diets. So an already restrictive diet gets even harder for vegans and vegetarians. Burks is vegan. Lawrence is gluten-free. But they say some simple food swaps can make going low-carb and no-meat a little easier.

The easiest way, they say, may be using cauliflower rice and zucchini noodles. They swap jicama for potatoes in home fries and kohlrabi for wheat in tabouli. They also use a lot of nuts and chia and coconut in desserts. The new cookbook has a recipe for almond flour crackers and biscuits.

"The easiest of all is swapping sugar for Lakanto Monk Fruit Sweetener," they say. "It has zero net carbs and tastes like sugar. It's actually pretty amazing."

The Food Doctor is In

Warner says that one of the earliest low-carb diets was Irwin Stillman's plan in the 1960s. Robert Atkins followed up with his Atkins Diet in the 1970s, but it didn't gain popularity until the 1990s. Arthur Agaston came next, with his South Beach Diet.

These are just three notable examples of numerous low-carb diets that have been created over the years, Warner says.

"The theories behind these diets have actually been around a long time," she says. "Their popularity will probably ebb and flow, as so many have done in the past. Some are more grounded in science than others, and it is important for consumers to be aware of misleading information and pseudoscience."

Before hopping aboard for any of these diets, Warner suggests you ask a few questions. Did the information come from a credible institution or qualified researcher? Are there other studies with the same conclusion? Who funded the study?

More than anything, though, Warner says Americans should focus on mindfulness, quality ingredients, and portion control.

While there are some risks with low-carb diets, Warner says there are benefits.

"What I like most about these diets is that most stress whole foods instead of foods that have undergone a lot of processing," Warner says. "Ultra-processed, convenient, and fast foods, which are so readily available in our food culture, have been linked to weight gain and poorer quality of diet."

Find Warner's full interview on low-carb diets this week on the News Blog at memphisflyer.com.

Idea: No stiff definition but focuses on restricting carbohydrates to around 50 to 150 grams per day.

Idea: Focuses on foods available to and eaten by humans in Paleolithic times. No set carb limit.

Idea: Very low-carb, high-fat diet puts your body in a metabolic state of ketosis, using fat stores for fuel. Fewer than 50 grams of carbs per day. (A banana has around 27.)

Idea: Restrict carbs to under 20 grams for two weeks and slowly add them back to your diet.