The Memphis brewery is going with the flow.

The space is a mess — dusty concrete floors, hanging wires, pipes sticking out of the floor, plastic hung over doorways. But soon, this will be Ghost River Brewing's new taproom.

The new taproom comes, along with a change in branding, just in time for the craft brewery's 10th anniversary.

The space was carved out of the front of the Ghost River building. Office space and storage was sacrificed for the taproom, which will feature a bar along the front with 12 taps and a large window into the brewing operations with the big, gleaming steel tanks (six 25-barrel tanks and 12 50-barrel tanks).

"We got our hands dirty first," Jimmy Randall, Ghost River's head brewer, says of Memphis' craft beer scene. "But when we started, we legally could not open a taproom."

Then, with High Cotton leading the charge, the law requiring food be served wherever alcohol is sold was changed.

The question subsequently arose about where to put Ghost River's taproom. Off-premises seemed the most logical conclusion. But, says Randall, it wasn't feasible to run an operation off-site for 20 hours while maintaining the brewery. Ghost River's building offered no give, either — until it did.

"We didn't have room," Randall says. "Then we said, 'Let's tear down some walls.' Sure enough, we have the space." 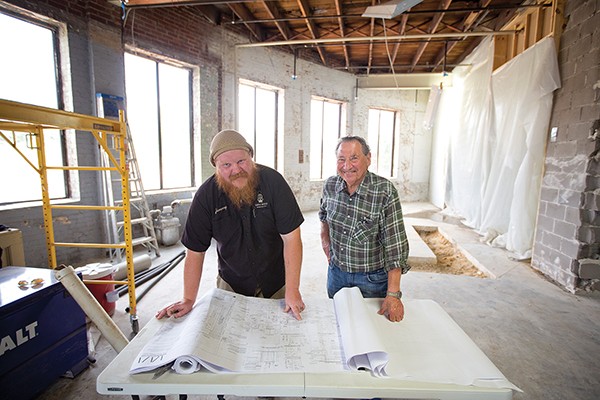 The cypress tree, the unifying visual element of all of Ghost River's beers, has been axed for a look that gives each beer a strong identity.

Hieroglyph was enlisted for the rebranding.

"You can't have a name like Ghost River and not do something really great with it," says Josh Horton of Hieroglyph.

Initially, the idea was to do something outdoorsy. That was struck for coloring and images for each beer that tell a story.

There are gold coins on the Gold label; the beer is Ghost River's best-selling beer by far. "It's been our bread and butter beer. It speaks well to the palates of non-craft beer consumers," Randall says. "It's a wonderful stepping stone out of mass-produced light lagers and moving into craft beer."

The Riverbank features a copperhead snake on the label, which delves into a bit of Ghost River history. Riverbank started as Home Run Red, which was brewed to be served at AutoZone Park during Redbirds games. The beer proved to be a hit, so they decided to make it year-round, which necessitated a name change. They landed on Copperhead Red, but were thwarted when they discovered a Copperhead Pale already existed.

The 1887 has a bird's-eye view of a well, a tribute to the sand aquifer. "It's a nighttime scene. You can see the crescent moon reflecting off the water in the bottom of the well, and there are ripples across the water like someone's thrown a coin down and made a wish," Randall says.

Each label has a black background, connnoting mystery and harking back to the ghost. On the bottle neck label is a lantern, which has multiple meanings, including the idea that Ghost River, as the first modern brewery in Memphis, led the way.

As for getting rid of the cypress tree, there was some pushback.

"There's a lot of love for the cypress tree, and there are a lot of people who miss it," Randall says. "Unfortunately, there wasn't much of a story associated with it, and we're finding that our prime market really wants to have a story involved."

The new branding kicked in about six weeks ago, and the taproom could be open as soon as early October.

"It's coming up," Randall says. "Closer and closer."