Charlize Theron provides a counterpoint to the male-gaze style of filmmaking in Tully.

In the mid-1970s, film critic Laura Mulvey introduced the concept of "male gaze." The vast majority of films, she said, were told from a male point of view, because the power structures that controlled Hollywood and all the other major film production centers of the world were overwhelmingly male. Men were the protagonists and antagonists, and women were mostly just there to be looked at. This point of view bias was so deeply ingrained in movies that it was difficult for many people of both sexes to even perceive it, much less imagine what a film devoid of male gaze would be like.

Now it's the woke 21st century, but the vast majority of films are still headed by men, despite major initiatives by women inside and outside the industry. Tully is directed by a man (Jason Reitman, son of the legendary producer/director Ivan Reitman), but its point of view is decidedly female, thanks to the film's other major creative partners. Diablo Cody, who broke into the business with 2007's Juno, wrote the screenplay and produced it alongside its star, Charlize Theron.

With a little mental work, one can imagine how Tully's story would break out if it were from a male point of view. It would go something like this: Drew (Ron Livingston) is a hard working father whose wife Marlo (Charlize Theron) goes to great lengths to convince him to help out with the parenting duties. 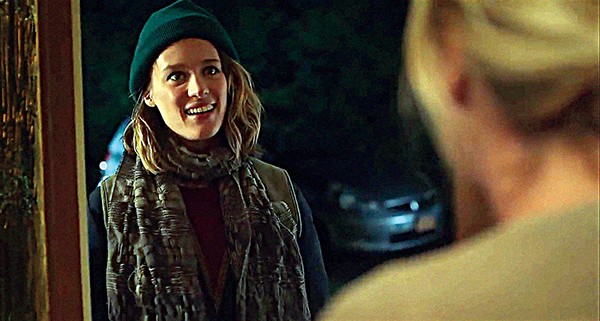 Maybe the I Love Lucy version is how it looks to Drew, but that's not how it looks to Marlo. To her, pregnant with their third child, Drew is barely there. He travels frequently for work, and when he's home, he spends his free time slaying video game zombies. Their kindergarten age son Jonah (Asher Miles Fallica) is starting to exhibit signs of serious autism, making his transition to school very difficult. The couple's struggles are put into sharp relief by a visit to Marlo's brother Craig's (director/producer Mark Duplass) enormous Modernist home, complete with servants and a nanny.

Craig, hinting at difficulties with postpartum depression Marlo had after Jonah was born, offers to foot the bill for a part-time nanny who will come in at night so Marlo can get some sleep. Drew's pride is wounded by his more affluent brother-in-law, so at first they decline the offer, but once baby Mia is born, Marlo's situation moves from difficult to impossible. That's when Tully (Mackenzie Davis) arrives. Tully is the perfect helper — maybe a little too perfect. She's almost like the female version of the male gaze trope of the quirky girlfriend who exists only to improve the life of the male comedic lead — a Manic Pixie Dream Nanny.

Tully takes its time in the wind up, but that's okay since it gives the audience more time with Theron. She was already one of cinema's great actresses before her immortal turn as Furiosa in Mad Max: Fury Road. Since then, she's been doing a lot of presumably well paid action leads, such as the fun but slight Atomic Blonde. Seeing her do comedy/drama naturalism is like a sip of fine wine after drinking from the box for too long. From the first shot of the film, which focuses on her ready-to-pop pregnant belly, she is photographed in a series of increasingly unflattering situations, many of which involve breast pumps. Cody's self-aware, wisecracking dialog hasn't found an actor who worked with it so well since Ellen Page in Juno. Theron sells it by trying to sound polite and normal while delivering cutting barbs.

Once Tully enters the scene, everyone fades to the background as the film becomes a tight two-hander between her and Marlo. Davis has masterfully handled an intense female relationship before, in Sophia Takal's excellent Always Shine. Here, it's less about jealous lesbian murder and more about cupcakes and self-care. But even as Marlo relaxes into the situation and accepts the help she didn't think she needed, undercurrents of tension and subtext swirl around the two women.

Reitman and Cody try for an ambitious ending, and don't quite stick the landing. But then again, Tully is all about the problems of excessive expectations of perfection thrust upon women in general and mothers in particular. Once you watch it, you're going to want to do something nice for your mom.