A few weeks ago, I was at City & State for an Urban Art Commission event and the closing reception for Averell Mondie's "Night Stalker" exhibition. I fell in love that night — not with a person or a work of art, but with the cocktails mixed by Vincent Hale, the bartender at Bari and Dodici, who was pulling double duty at City & State.

My drink was a blend of Green Chartreuse, gin, and some this-and-that, which Hale tossed together in a mixing glass and then poured. It was a complex concoction — probably nothing I'd ever make at home — and it tasted sweet, yet peppery-sharp, with herb-based flavors that packed a sophisticated wallop to my taste buds.

Apparently, Chartreuse — the French liqueur came first, lending its name to the fluorescent color — is making a big comeback. What's actually in the liqueur is a secret, closely guarded by Carthusian monks who have been distilling it since 1737, following a recipe left to them by François Annibal d'Estrées nearly a century earlier. The ingredients include 130 herbs, flowers, and other plants, although no one but the monks knows exactly which ones. Savvy tasters can pick up hints of allspice and anise, saffron and sesame. Chartreuse comes in two varieties: Green and Yellow. The former is bolder (read: more herbaceous, almost woodsy), while the latter tastes sweeter, almost floral. Green Chartreuse is best paired with gin or tequila; Yellow Chartreuse goes well with Scotch or bourbon. 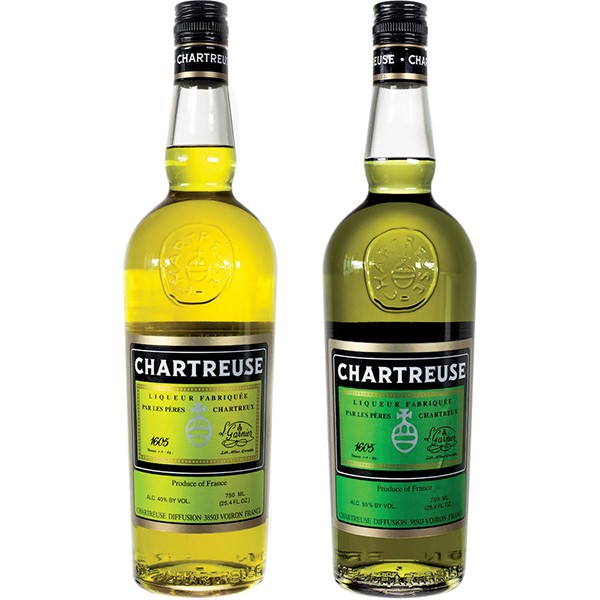 Chartreuse was originally conceived as a digestif to ward off sickness. It's got a 55 percent ABV, which can certainly alter reality after a few sips. As Tom Waits put it on his quintessential album Heartattack and Vine, "With a pint of Green Chartreuse ain't nothing seems right/You buy the Sunday paper on a Saturday night." The truth is, Tom ain't right — nobody in their sane mind would drink Chartreuse of either color by the pint.

Since my first taste at City & State, I've noticed Chartreuse cocktails on the menu elsewhere. Ecco on Overton Park combines Chartreuse with St-Germaine liqueur, Prosecco, and soda for an Elder Spritz. Out east, Hog and Hominy offers the Overachiever, which pairs Chartreuse with mescal, vermouth, and orange bitters.

If you're a home mixologist, I recommend starting with the Bijou, a classic cocktail that Imbibe magazine describes as "crisp and herbaceous." The drink calls for 1 ½ ounces of gin, ¾ ounces Green Chartreuse, an ounce of sweet vermouth, and two dashes of orange bitters. Stir the ingredients with ice, then strain it into a chilled martini glass.

Or, if something more modern is your speed, try the Green Eyes Gin Cocktail, a frothy recipe from Portland, Maine, that blends gin, Green Chartreuse, simple syrup, and lime juice with fresh egg whites. The ingredients are shaken until foamy, then strained into a lowball glass.

Not a fan of raw egg whites? Go for the Prohibition-era cocktail The Last Word, birthed at the Detroit Athletic Club in the early 1920s. Equal parts gin, Green Chartreuse, maraschino liqueur, and fresh lime juice, The Last Word packs a zing that has gained notoriety among today's drinkers. Aficionados of the drink include MSNBC's Rachel Maddow, who featured The Last Word during one of her "Cocktail Moments" segments as a riff on predictions about the end of the world.

If the world is ending, I know just how I want to go out — with a Chartreuse cocktail in hand. Or maybe just a pint jar full. Huh, Tom Waits could be right after all.