In restaurants, as in life, the younger sibling seems to get all the attention. That's why you and your pals spend your happy hour drinking beer, eating the famous Badass Nachos, and watching Sportscenter highlights at Sweet Grass Next Door. You've forgotten the original. You've left it high and dry because you can't watch Around the Horn on a non-existent TV, nor can you order a plate of nachos that feeds approximately 327 people at the original (and older) Sweet Grass. Sweet Grass came along in 2010 at 937 Cooper, a year and some months before Sweet Grass Next Door opened its doors, well, next door. It's time for Sweet Grass to take back what is theirs, and Nick Lumpkin, the Cocktail Program Director of Sweet Grass and all its sister restaurants, is leading the charge.

Nick had been employed by various other local restaurants when he landed a gig at Sweet Grass. Humbled before chef/owner Ryan Trimm and staff, he worked as the parking lot attendant. You know, that guy you cuss out because you don't understand why you have to pay to park to go get sloshed at the Deli? It was a testament to his devotion to the Sweet Grass family, because he worked in the parking lot each weekend for a year. Eventually, just two and a half years ago, he began working bar shifts and there he has remained ever since. He curates a careful menu of cocktails, many under $10, which is becoming rare in the Midtown mixology scene. Competing with Next Door and its successes can't be easy, though, so we went to pay a visit to the restaurant that started it all. 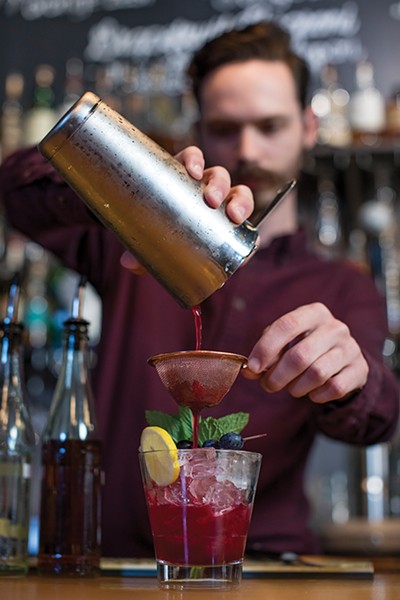 Sweet Grass is one of many restaurants that is on the fancier side but with a bar that is decidedly more relaxed. We arrived in the middle of a rainstorm and, though the dining room wasn't busy yet, the bar was packed. Furthermore, it's the type of bar where two drowned-rat-looking people coming in from a storm are welcomed. The Sweet Grass bar boasts a deal unlike any other in Memphis: Tuesday through Friday, oysters are 50 cents each from 5 to 7 p.m. The oysters are rotating; any given day they offer oysters from the East, West, and Gulf coasts. Think you can snag this deal at Next Door? Think again, buddy. It's only available for patrons of Sweet Grass.

But that's not all Sweet Grass offers! They have an incredible selection of whiskeys and bourbons; Nick thinks the number is close to 100. My friend and I asked Rachel, who was tending bar, what she felt like making (you'll see that this is a running theme at the Sweet Grass bar) and she served us two whiskey cocktails that were delicious. We followed those up with one of Nick's original creations, the Rye Time, made with Wild Turkey 101 Rye, honey gastrique, and thyme. Nick, and seemingly Rachel unless she just felt sorry for me because I looked like hell, says that he enjoys catering to people and going off-menu to craft a drink that he knows they'll enjoy.

He also knows what the people want. On Sunday nights, he keeps the bar open until midnight, welcoming those from the service industry. He spins records and offers a cocktail menu with $6 drink specials. Shockingly, this is not a well-known thing. He's been doing it for nearly four months, and all us restaurant and former restaurant folk, creatures of habit, flock to the same bars each night. Friends, we are missing out. A bartender who will make craft cocktails for $6 and play vinyl until midnight on Sundays? We don't deserve Nick.

Ditch the little sister that is Sweet Grass Next Door and take your ass to Sweet Grass for once. You don't need a reservation to slam some local beers and eat oysters at the bar. Hobnob with all the fancy people about to sit down to dinner while you and Nick recount his sordid parking lot past. While I was racing through the rain toward Sweet Grass that evening, Nick was stuck in that same rainstorm, only he was on a Bird scooter. Now that's a guy I'd like to give money to.