Chicken or the Egg 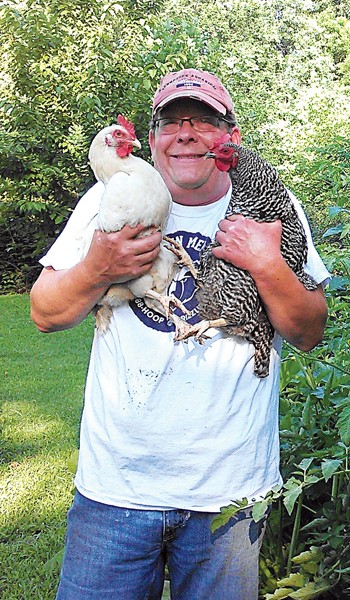 Robert "Curly" Birkholz is a firm believer in the old adage "Everything happens for a reason."

A couple years ago, a stray White Leghorn chicken flew into Birkholz and his fiancée's backyard in Rosemark, a small town in north Shelby County. Although they had no idea how to raise chickens, they built a small coop for it and named her Buford.

Buford laid eggs for six months before escaping her coop one night and, unfortunately, being killed by a neighborhood dog.

"That bird became our best friend," Birkholz said. "It absolutely changed our lives."

In Buford's memory, Birkholz recently developed the Rosemark Foundation, a nonprofit organization that educates people about chicken farming and the nature of chickens as pets and sources of food. They also provide farm-fresh eggs to underprivileged families.

"A lot of people bring their children to our home and go into our backyard flock, and you would be amazed, from adults to the children, how few people understand the process of a chicken," Birkholz said.

To date, the Rosemark Foundation has started backyard flocks for nearly 100 people. Birkholz said on average, a person can sell 30 dozen eggs a week to various consumers. Each dozen can be sold for around $5.

Birkholz said dozens of eggs in all different colors are produced weekly by his chickens. For example, his Araucana chickens lay chartreuse-colored eggs. His French cuckoo marans lay a dark, Hershey chocolate-colored egg. And as the name implies, his Olive Egger chickens lay olive-colored eggs.

"One of the greatest things is to see children and adults look at the different eggs," he said. "You get this rainbow of egg colors, and that opens up the excitement level. And then you get to explain how to do it."

Three to four visitors come to Birkholz's home every weekend to view his backyard chicken coops and learn more about the birds — each hen can produce around 300 eggs annually. People can also have their pictures taken with a chicken.

Although chicken farming has numerous benefits, Birkholz says the endeavor can be costly in the beginning. And he says maintaining chicken coops isn't an easy task.

"You have to build a coop and feed them until they get to maturity, but once they start laying, that usually comes back," Birkholz said. "Most birds start laying eggs in about six months. Those are the hard months, because you're just spending money feeding and tasking.

"[Also], the USDA requires that you clean your coop once a year in most commercial operations. I clean mine once a week, and it's not always something I'm skipping out there to do. This is not the kind of animal that you can leave 50 pounds of chicken feed, a bucket of water, and go out of town for four days either. It's a commitment to both time and duty when you decide to have a backyard flock."

In conjunction with the Mid-South Food Bank, the Rosemark Foundation is in the process of organizing an egg giveaway this July.

Birkholz said the organization plans to begin teaching classes and providing weekend chicken farming camps. They also hope to eventually develop offices throughout the Southeast, as well as have a general facility in Memphis.