Gym brings rock climbing to the heart of Soulsville.

Memphis Rox Climbing + Community opened its doors earlier this month in the heart of Soulsville.

It's the first of many projects planned for the area by Tom Shadyac, the Hollywood filmmaker with family and community ties to Memphis.

Shadyac, through his One Family Memphis nonprofit organization, built Memphis Rox, a 30,000-square-foot climbing gym with walls up to 45 feet high.

It's the first phase of a One Family campus in the area. The next phase will include Mountaintop Media, a film studio and school.

Gym leaders Zack Rogers and Jon Hawk told us about climbing, the gym's impact on the neighborhood, and what's next for One Family. 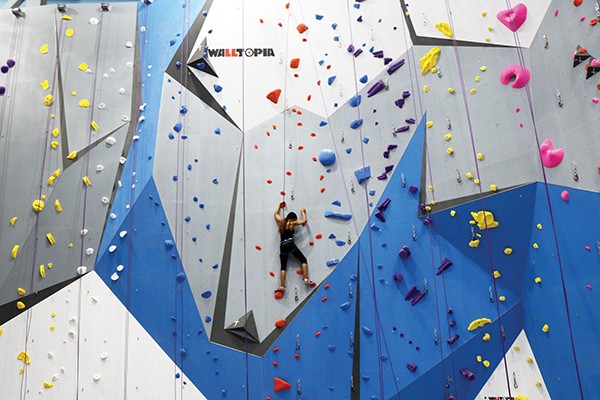 Memphis Flyer: Why a climbing gym?

Zack Rogers: When Tom first entertained the idea of building a gym, he started by taking kids from the community on trips to Nashville and Colorado to climb so he could get feedback.

For the most part, rock climbing has been inaccessible to Memphians, but the response was really positive.

Rock climbing — at its core — is a sport that promotes cooperation and connectivity as opposed to competition. It's a lot like mentorship in that you're able to learn from your past experiences and failures and impart that knowledge onto others.

But in order to reach that ultimate goal of the summit, you must be completely in the present moment, only thinking about the next move you should take. Such is life.

MF: Is it a hard sport/activity to break into?

Jon Hawk: There are routes and wall angles available for all ages and abilities. What makes rock climbing special is that there's not one age or build that is needed to be a proficient climber.

MF: What's the end goal of the gym on a broader, community standpoint?

ZR: At Memphis Rox, there are no economic barriers. First and foremost, we're a family institution that shows up as a climbing gym. No one is turned away, regardless of ability to pay.

Our suggested membership dues range from $55 a month to $10 to $12 for a day pass with annual options as well. But we're reimagining currency on our campus.

It's energy, it's whatever you can provide. Five hours of community engagement over four weeks can be exchanged for a monthly membership. Volunteer hours can be spent in Memphis Rox.

It goes back to our mission — to build a family, connecting people to people, where we lift each other up.

MF: The gym is the first of many things you have planned. What's next, and when is it coming?

A group of 30 students, 15 from LeMoyne-Owen and 15 from University of Memphis, shadowed industry professionals through the entire production.

Memphis Rox is our immediate meeting point, complete with a juice bar, workout and cardio equipment, and flex space for yoga and meditation.