Cole O'Keeffe's "God is Real and Other Perceptions" at Jay Etkin

O’Keeffe’s emotionally expressive art is on view through August 10th.

Cole O'Keeffe, shirtless and barefoot, painted red streaks on his face and yelled, "Kill the beast! Cut his throat! Spill his blood!"when he played the young savage, Jack, in a Lord of the Flies production his senior year at Christian Brothers High School.

A year later, he stopped acting and began painting on canvas. His one-man show, "God is Real and Other Perceptions," is on view through August 10th at Jay Etkin Gallery. 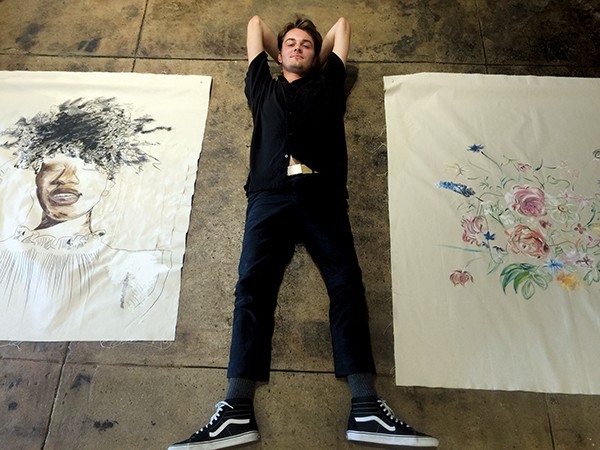 "I wanted to be a movie star ever since I can remember," says O'Keeffe, 22.

His uncle, actor Miles O'Keeffe, appeared shirtless and barefoot in the title role in the 1981 movie, Tarzan the Ape Man. "I had coaches coming up to me in sixth grade being like, 'You're Tarzan's nephew, right?'" He was proud of that. "I don't know why that just inspired me so, but it did."

O'Keeffe flunked out of the University of Tennessee at Chattanooga. "My parents said, 'Go become a movie star, please. Chase this thing.'"

He moved to California, got a job as a bartender in a strip club on Sunset Strip, and worked on a screenplay.

Six months later, he began working as an assistant at an art gallery in Echo Park. Living at the gallery and being around the owner, a painter, gave O'Keeffe the impetus to become a painter. He realized, "I have this in me — this voice that wants to express itself."

O'Keeffe eventually decided to return to Memphis and go back to school. His first painting was of a woman he met. "I tried to write about her, and all the words were crap," he says.

A friend told him to paint it instead. "I got a bunch of paint supplies, set up my space, and started painting what I was feeling, what I saw within her."

That did it. "I jumped into a painting for the first time that night and came out of it four hours later crying. Like a guy who just discovered a new hand."

O'Keeffe painted Mouth Ajar after a breakup. "I was super sad because, of course, I wanted to love her forever. But, also, I felt a cool relief of it all. Away from the chaos of love." He then saw an Instagram photo of a woman with her mouth ajar. "And she was embodying that very energy," he says.

O'Keeffe's subjects aren't always people. "Sometimes they're moments," he says. "Mountain-top moments when things click and then I paint that moment. But mostly it's people."

"Pop-punk simplistic" is how O'Keeffe defines his style. "It's this confident use of loud color, but in a way that respects predominantly white, negative space," he says. "I don't have any piece that is painted corner to corner. It's all moments within this canvas. It's two lines coming together and then, suddenly, this explosion of paint starts to just come from this connectivity."

His style is "not abstract and it's not expressionism, and it's not just contemporary, and it's not minimalism. It's combining all of these sensibilities and the respect of them into something that maybe has a little more narrative."

O'Keeffe doesn't paint every day. "I let life knock me around a little bit until a point where I have a whole painting knocking on every beam and fiber of my body," he says. "And that night I go home and paint it."