Collecting Elvis at the Dixon

"What I'm going to show you is unknown," says John W. Heath.

It is a program from Humes High for a variety show. Listed on that program, dated March 27, 1953, is Elvis Presley. This is not the program from another famous Humes High show. This one is earlier and is in the possession of Heath, who has a vast collection of Elvis memorabilia. For Heath, this program that nobody knows about is an artifact that marks the moment the world changed. "This gave [Elvis] the encouragement to go to Sun Studios," and, thus, he says, usher in rock-and-roll.

Heath will lead a talk on "Collecting Elvis" during the Dixon's Munch & Learn series Wednesday at noon.

Heath, a former junior high principal, says that he and his wife used to immerse themselves into their children's activities over the weekends. Daughter was into athletics, one son into military history, the other son into Elvis. They started looking for Elvis stuff at yard sales and flea markets. They got together a good enough collection to start showing at the Elvis Week expos. Dealers would buy them out. Heath studied up. 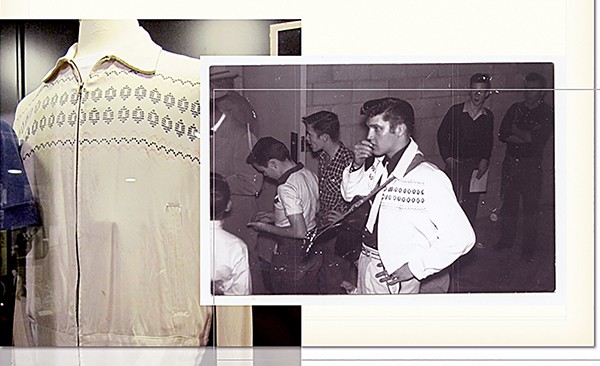 Heath says he perfected the bundling method, in which he takes a whole load of stuff for a set price, long before American Pickers. That approach secured him Mae Boren Axton's contract for "Heartbreak Hotel." (He let go a similar contract for "Heartbreak Motel.") He's got a Champagne glass from Elvis and Priscilla's wedding, the third-earliest known signature, pajamas, the "Comeback Special" suit, a matchbook bearing autographs from Elvis and Natalie Wood, the contract for Graceland (with the signatures of Elvis, Vernon, and Gladys), a pill bottle for Dexedrine prescribed the day before Elvis' death, and a jacket given to Heath by one of his teachers who was the son of a man who got the jacket from a girlfriend who got it from Elvis after a concert.

And he's got the pre-release acetate of "That's All Right"/"Blue Moon of Kentucky" — what Heath calls the "rarest record of all times."

Says Heath, "Elvis is the greatest American success story ever. A better story than Lincoln. This will never happen again."