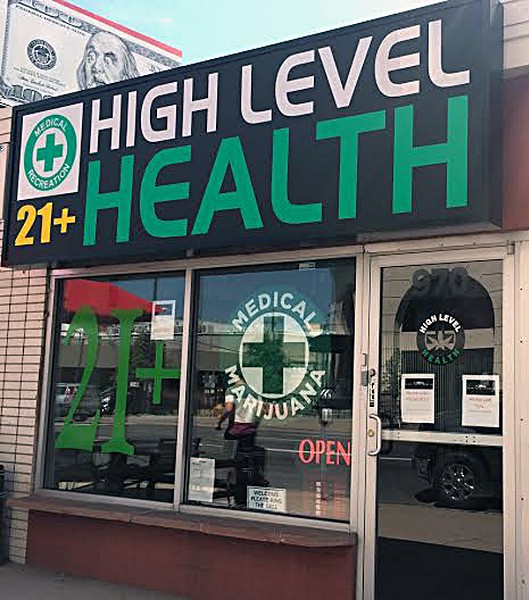 In the late 1970s, New York's East Village was terrific and awful. It was a time when we thought any reason to smoke pot was a good one. We had CBGBs and 50-cent subway fares and Basquiat's SAMO (with copyright symbol) plastered all over. There was also a dawning realization that something called AIDS was murdering friends, family, and loved ones. So, yes, existence there really was the musical Rent.

Marijuana commerce thrived. Two doors from my tenement, an anonymous storefront opened to a vacant room with a box office-like opening at the rear. A guy scrutinized you as you walked up. Say "nickel bag" and plonk a sawbuck on the counter and he'd wordlessly produce a small coin envelope, bulging with bud. You pocketed it, no questions about strength or provenance, and went back out, praying that New York's Finest were fighting crime elsewhere.

Acquiring weed has long been a furtive activity. But nowadays, stealth transactions are only a memory for recreational pot-users in Colorado and Washington. I was in Denver recently, where getting your bhang on merely involves walking into a storefront and bringing plenty of cash. Sounds like the old days, but that's where the similarities end.

A visitor to Colorado should start with weedmaps.com and coloradopotguide.com. The sites cite legal specifics and offer locator maps to find the nearest vendors. Avoid prescription-only stores if you don't have an MD's blessing. There are some 75 or so recreational retailers in Denver, though. And bring lots of cash, as credit cards are not yet accepted. In the first three months of legalization after January 1st, Colorado got $7.3 million from the 22 percent (yikes!) recreational pot tax. Pricing varies, but you can easily pay $100 for a quarter ounce.

As an out-of-stater, you're limited to a quarter-ounce per transaction, but anyone 21 or older can carry an ounce of THC in the state hassle-free, except on federal parks and properties. Not all cities allow sales, and public consumption is not allowed.

The toking-in-public prohibition is mainly enforced with a wink-and-nudge. It's common to see someone at a hip little coffee shop having a latte al fresco and lighting up. Certain concerts and public gatherings proclaim "420-friendly" status, but technically, you could still be arrested.

Thus armed with a responsible pothead consumer's knowledge, I walked to the nearest cannabis vendor. At the entrance, I still looked both ways with practiced panic. And then I floated into a very different world.

High Level Health on Lincoln Avenue is an irrepressibly cheery place. I am greeted at the door by an employee who checks my ID to make sure I'm not too young (I'm not) and signs me in. She is as briskly efficient as any flight attendant, but with more body jewelry. Exuding a hip perkiness, she leads me to the back room, where I meet Joshua Arendt, the budtender. "He'll answer any questions you have," says my escort.

I have a few, but first, I'm wide-eyed. This place would be heaven for Memphis' own Muck Sticky, the troubadour of toke.

There are shelves and racks with pipes, vape pens, massage oils, T-shirts, and all manner of merch. On one side, shiny glass cabinets are lined with candies, brownies, sodas and jellies and the other has shiny glass cabinets filled with rows of medicine bottles and glass containers with a variety of buds.

It blows the mind. There are at least a score of buds, from Chocolate Rain to Cataract Kush, packaged in labeled medicine bottles. Arendt — cheery as any good salesman — says hybrids are genetically bred for bud density and concentration of THC. "You can have a myriad of effects," he says. "Up or down or in between." You choose herb according to your whim: to sleep, to stay alert, to whet the appetite. Or to watch the last half hour of 2001: A Space Odyssey.

You can also get your buzz on without a single toke. Infused edibles — not your grandma's pot brownies — pack a punch. However, standards for baking and claims for effectiveness are loose. It's easy to gulp down more than you really want, as credulous New York Times scribe Maureen Dowd recently discovered. Silly journalist. Good thing she didn't sample Dew Drops hemp oil, which gets you a mile high using a dropper that deploys the liquid under the tongue. Efficient, discreet, and with potential for easy misuse.

Or you can keep it basic. A customer asks for a pre-rolled reefer. "Just one?" he's asked. "Yes, please," he says.

Viewpoint Rocky Mountain High Colorado pot for tourists How to buy pot in Colorado Dude, I'm so wasted Got brownies?