There was a moment at Monday's meeting of the Shelby County Commission when county Mayor Lee Harris seemed to be at variance with his adopted policy of a $15-an-hour minimum wage for county workers. It came as the commission took up a "resolution in support of all public sector employees in Shelby County earning a minimum wage of at least $15 an hour." A positive vote for the resolution would put the commission, policy-wise, on the same page as the mayor.

Among those praising the resolution was Commissioner Tami Sawyer, a candidate for Memphis mayor, who was one of several commissioners who asked to be added as a co-sponsor. Commissioner Reginald Milton asked on as well, sharing an emotional recollection of doing janitorial work in an office building along with his widowed mother, from the time he was in the sixth grade until his graduation from high school, in order to help pay the bills for his family. 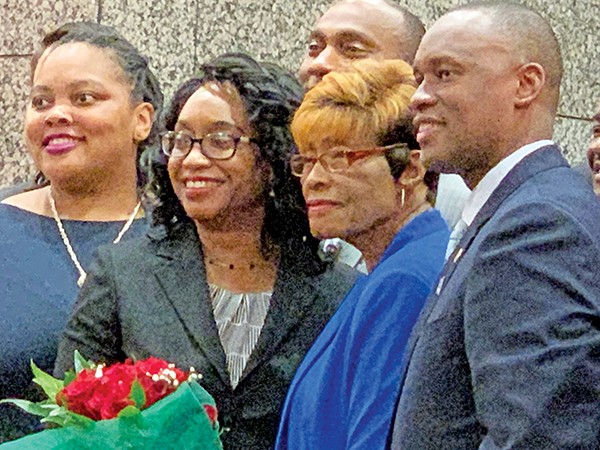 At no time during that extended period, Milton noted, was the minimum wage for this labor raised. "It is abhorrent, it is a sin," he said, "for people to make a living off the backs of other people and still use the word 'Christian.'"

Commission chair Van Turner was next to comment, and he asked Harris if a summer jobs program the mayor had announced would also meet the $15 minimum-wage standard. "No," Harris answered, and began to explain.

The program, which offers temporary blight-control jobs to teenagers, was a continuation of a program launched by former Mayor Mark Luttrell, Harris said. He added that he had decided that, for one summer, which would be coincident with the forthcoming bicentennial celebration of Memphis, the number of participants would be increased from 125 to 200, with wages running from $10 to $12 an hour. Six individuals, serving in managerial roles, would get $15 an hour.

As Turner explained later to the Flyer, it was appropriate to consider temporary jobs for teenagers in a different light than permanent jobs held by adults, for whom the $15 minimum-wage figure would be universal and mandatory. Asked for his opinion, Milton concurred.

After this interlude, the commissioners resumed their discussion of the resolution mandating $15. Commissioner Brandon Morrison objected to the resolution, saying that a positive vote would create a "slippery slope," and that she was "not convinced of the outcome."

She abstained, while four other Republican members — David Bradford, Amber Mills, Mark Billingsley, and Mick Wright — voted no on the resolution, which passed by a vote of 10-4-1, with all commission Democrats in support. It was a reminder that, while party-line votes do not happen often on the commission, they do occur.

In other action, the commission approved without dissent Harris' nomination of Phyllis Aluko to be the new Shelby County public defender, and passed on third reading an ordinance committing the county to its fiscal share of a city-county pre-K educational program.

• It's the spring of a city-election year, and events involving candidates are beginning to fill up the calendar. Last Thursday saw four concurrent fund-raisers, three for city council hopefuls (Cody Fletcher, running for the District 9, Position 1 seat, Chase Carlisle, running for a District 9 seat, with position number not yet selected, and Britney Thornton, District 4 council candidates). Eighth District Congressman David Kustoff was the beneficiary of a fund-raiser the same night.