Community Needs to Remain Engaged in New U of M Developments

A lot of development has been happening at the University of Memphis in the past couple of weeks. With all of these new projects come picture-perfect renderings of what the spaces will look like, grand hopes, and, with some, the promise of a great community benefit.

The most recent notable development at the university was the completion of the new pedestrian bridge crossing the Southern Avenue railroad track. That project also includes a new five-story parking garage and amphitheater. 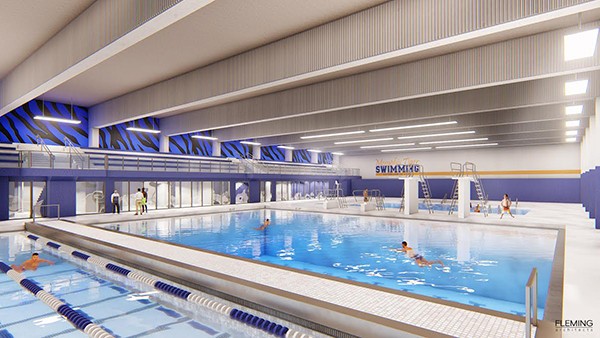 All together, that's a $36-million project. Hearing all of the hype, I took a drive to my alma mater's campus this week to check out the new masterpiece. And I must say, it was quite impressive. I'm all for it.

The university also filed a building permit late last month for a new music center. The $35-million Scheidt Family Music Center is going to be state-of-the-art, university officials have said. Along with a number of cool additions, including recording studios and rehearsal spaces, the new center will be about double the size of the existing school of music.

Officials say the facility will be an asset for not just the university but the community as a whole.

Also last month, the university and the city, along with the Tennis Memphis organization, announced the $19-million renovation of Leftwich Tennis Center. If you're not familiar, the tennis center sits on Southern, sandwiched between Audubon Park and the Memphis Botanic Garden.

I grew up playing tennis in Whitehaven, but I played my fair share of matches at Leftwich. Actually, I've played or taught tennis at least once at each of the six public centers around the city. Leftwich, as it is now, is by far the cleanest, safest, and largest of the bunch. Soon it will be "one of the finest in the country," according to U of M president M. David Rudd. Although the center is sufficient as is, that thought is exciting.

Though there are more pressing matters in the city and at the university than nice tennis courts, the Tiger tennis teams needed a new home court, and that's completely valid. I'm just concerned that recreating this tennis center into something grandiose might be a barrier to some. I hope the city will keep its word and ensure that Leftwich remains open and accessible to the public.

Memphis Mayor Jim Strickland has said the new facility will be a "true gem for our community." The city is investing $3 million into this project, so I truly hope that the community — all of the community — will be able to benefit from this "gem."

Another new project proposed with the promise of community engagement is the $10-million Mike Rose Natatorium. This is a part of the $30-million Center for Wellness & Fitness project. The university is building a new fitness center and renovating the old one. The natatorium will be an enhanced and expanded version of the existing swimming pool.

The natatorium was recently in the news after Shelby County Mayor Lee Harris moved to withhold $1 million in county funds for the project until the university presented a plan to pay all employees a livable wage. Rudd said at the time that the university did in fact have a plan to raise hourly wages to $15 an hour over the next two years, but evidence of the actual plan has not emerged.

I know nothing about university budgeting, but I do know that people deserve a living wage to support themselves and their families. So if the university can afford state-of-the-art, world-class facilities, it should also be able to afford to pay its employees what they deserve.

I've seen a lot of renderings for a lot of projects, and sometimes the final product is not quite what was promised. That can be a bit of a let-down, but that's okay. We can move past that. It's not okay, though, for the promised community engagement aspect of these projects to fall short. So when the projects materialize, it's crucial that the university and the city (in the case of Leftwich Tennis Center) follow through, ensuring that the center is a tangible asset for all of the surrounding residents — those in East Memphis and those in Orange Mound. It's also important that this new natatorium does in fact "promote water safety and enrich community health among diverse populations," as the university has said.

I think the university should keep growing, developing, and adapting to stay competitive, relevant, and attractive, but at the end of the day, it's the University of Memphis, so the city should always, in some way, reap the benefits of the school's growth. The community will be watching and waiting. Make us proud, University of Memphis. We believe in you.