Don't toss out that broccoli stem. Cook it up!

Photographs by Ari LeVaux Broccoli stems — get ready to learn to love them.

I used to grumble at grocery stores that sell broccoli heads shaped like lollipops, in which tiny crowns sit atop lanky, woody stems. I have even gone so far as to break those stems off, right there in the produce aisle, and leave them in the cooler while I only purchased the heads. And I felt completely justified in doing so. The grocer was trying to charge me crown prices for something that was mostly stem. They weren't going to play me like that.

It isn't news to me that the stems are edible. Until recently, I haven't been inclined to eat them, much less do work to prepare them. By work, I guess I just mean peeling them, something I'm happy to do with onions. But onions are necessary, while broccoli stems are a burden, precisely because they are edible. You can't throw them away without wasting food.

My relationship with broccoli stems has recently changed. I now eat them, and not out of guilt, but desire. 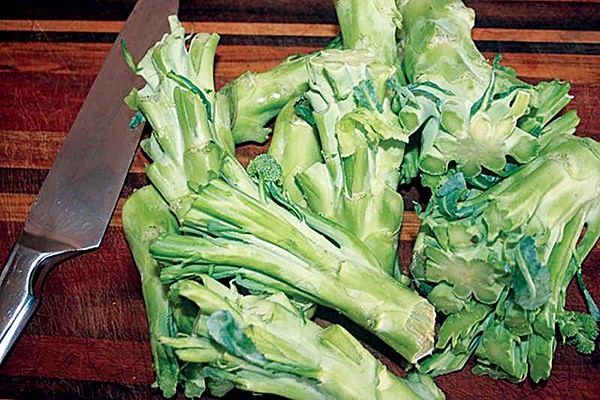 This shift began when I was at the farmers market recently, hanging out near the end of market like I do, waiting for the deals to come to me. Sure enough, a farmer offered me the rest of his broccoli — about 20 pounds — for 20 bucks. It was a screaming deal on fresh, organic broccoli, and I accepted without hesitation.

Back in the kitchen, I broke the crowns into florets and prepared them for freezing. After blanching them for three minutes in boiling water, I plunged them into cold water to cool them quickly and fix their bright green color. Then I packed them into quart freezer bags.

When the steam dissipated and my bags of blanched broccoli were in the freezer, I still faced a pile of broccoli stems, feeling annoyance and guilt. One I could have tossed to the chickens without an issue, but such a mountain of stalks had to be climbed.

I had been operating under the assumption that the stems are not only less tasty than the crowns, but offer fewer nutrients too, and are more labor-intensive to cook. It turns out broccoli stems have nearly the same nutrients as the crowns, plus more fiber. Those nutrients include sulforaphane, a substance that has been shown to protect against several types of cancer. Broccoli is also suspected to help rid the body of toxins, thanks to a large study in a polluted area of China. So anything you can do to eat more broccoli and throw away less is going to be good for your body as well as your wallet.

While there is the extra labor involved in peeling the stalks, in some ways they are also more forgiving to prepare. They aren't as easy to overcook as the florets, which turn a dark shade of green and become mushy and bitter, while the stems only get sweeter with prolonged cooking.

As for the flavor, it's neither better nor worse, but different. And delicious.

Thus, I'm going to start calling them broccoli hearts, and the slices thereof: medallions. And today I'm the proud owner of a few bags of blanched broccoli heart medallions in the freezer, alongside the crowns. Knowing what I now know, don't be surprised if I reach for them first.

(This holds true for cauliflower stems.)

Oil or bacon, for the pan

Peel and slice the broccoli stems. To be extra fancy, slice them on an angle.

Cook the stems in oil or bacon for about five minutes, until soft, on medium.

While they cook, combine soy sauce, hoisin sauce, and sugar.

Add the garlic and chili flakes, and stir it around. After about a minute, add the sauce mixture. Stir-fry for another minute. Remove from heat. Garnish with chopped green onions, and serve.

This soup has turned out to be the only way my kids will ever eat any form of broccoli. It works as a great chilled soup in summertime and would be lovely served warm in the colder months. It's similar to vichyssoise.

A pinch of fennel seeds

Cream, sour cream, or mayo as a garnish (optional)

Add all of the ingredients to a pan, and cover them with stock by at least an inch. Grind in a generous amount of black pepper. Simmer until soft. Let cool to the point where it can be pureed. Puree. Serve with cream, sour cream, or mayo.